The Cherries took the lead in the third minute, but Henry Sandat levelled after a quarter-of-an-hour before Habib Bolarinwa scored with a superb finish midway through the first half to put Southend in front for the first time. Daniel Adu-Adjei’s second goal looked to have earned the visitors a point until Amir’s dramatic late intervention.

Youth team coach Danny Heath made two changes to the starting line-up that had defeated Oxford United a fortnight earlier, with schoolboy Romeo Ebondo replacing Patrick Droney at the heart of the defence and Omari Williams coming in for Tayo Adedoja.

The changes meant that there were three U16s in the starting line-up, with Smai Norman and Max Fiddes maintaining their places in the team, whilst Brian Garzon was the only second-year scholar involved in the matchday squad.

Blues looked bright early on, but it was Bournemouth who edged ahead. Fin Purcell had already made a good stop with his left leg to deny Kian Tydeman by the time that Remy Reece-Dottin set-up Adu-Adjei with a right-wing centre that was swept into the bottom right-hand corner of the net.

Like the Oxford match, going behind was a set-back for Heath’s charges, but they responded in the best possible manner when Sandat nodded home in the 15th minute. The midfielder had scored in both of his previous two home starts, and this time he guided a header underneath the crossbar from Amir’s inswinging corner.

Within a couple of minutes Southend could have taken the lead as Garzon sprinted clear down the right-hand side and forced Mack Allen to block with his legs as he drilled a shot towards goal at the near post. The rebound almost dropped to Fiddes, but he couldn’t arrange his feet quickly enough to convert.

Blues were on top, and Sandat glanced a Garzon cross wide of the far post before Bolarinwa marked his 25th youth team appearance with his first goal. Having retrieved an over-hit cross at the far post, the defender still had plenty to do but, having assessed his options just outside the ‘D’, he sent a searing shot into the net via Allen’s fingertips and the inside of the right-hand post.

Fiddes curled over with his left foot from 25 yards out in the 28th minute, and within moments Williams had directed a header over from Ibrahim Kamara’s right-wing cross. Kamara then attempted to pick out Fiddes with a pass inside the penalty area, but Allen managed to grab hold of the ball ahead of the young forward.

Having sustained almost 20 minutes of incessant Southend pressure, Bournemouth did manage to test the Blues back-line shortly after the half-hour mark when Purcell saved from Baylin Johnson and the winger also curled over after Norman had blocked Adu-Adjei’s path.

Both teams created chances in the early stages of the second half. Purcell saved a deflected Johnson effort and Adu-Adjei swept over at the near post from Charlie Osborne’s cross for the visitors, whilst Garzon drew a low save from Allen from Ebondo’s raking pass before Norman nodded wide from a quickly-taken Williams corner.

Purcell made an excellent full-length save low to his right-hand side after Adu-Adjei used centre-back Norman as a shield to leave him unsighted in the 53rd minute, but a couple of moments later Allen was fully extended himself to turn Amir’s skidding 20-yard strike around the left-hand upright.

From the resultant corner, Fiddes headed into the goalkeeper’s gloves before a confident Sandat sent an audacious first-time volley over after being set-up by Garzon. The match had only just reached the hour mark when Bournemouth’s Toure Williams forced Purcell into a good reactionary save.

As the second half progressed, the game did settle down, although a couple of mistakes at the back almost gifted the Cherries an equaliser. Norman presented possession to Lewis Brown, but Purcell turned away his shot with an outstretched left leg before Purcell attempted to dribble around Johnson and lost the ball.

The gloveman was relieved when Johnson’s cross was cleared by Bolarinwa just inside the penalty area and play then switched to the other end with a quarter-of-an-hour remaining, with Allen pushing over a 25-yard free-kick by Amir before almost being caught out by the skipper’s resultant corner, having to back-pedal to tip over again.

Bolarinwa was moved inside to partner Norman when Mitch Fallows came on for Ebondo, with U16s forward Freddie Buers maintaining the schoolboy contingent by replacing Garzon on 78 minutes. Bolrinwa was immediately called into action to dispossess Adu-Adjei as he prepared to unleash a shot in the penalty area.

Unfortunately, Blues were unable to clear their lines, and Adu-Adjei doubled his personal tally for the match with nine minutes remaining as he angled a sublime header in off the inside of the left-hand upright and out of Purcell’s reach from Brown’s right-wing cross.

Another schoolboy, Alfie Terry, came on for Sandat with five minutes remaining and, despite the disappointment of parity having been restored, Blues were revitalised. Amir drove a shot narrowly wide after being teed up by Williams and Fiddes then glanced wide from a Buers cross.

It looked as though Blues might run out of time, but Amir hoisted up a cross deep into injury time and Allen clattered into Fiddes as he tried to head home, with the referee pointing to the penalty mark. Amir, wearing the captain’s armband, took responsibility and stroked home the spot-kick to ensure the Southend’s winning run continues. 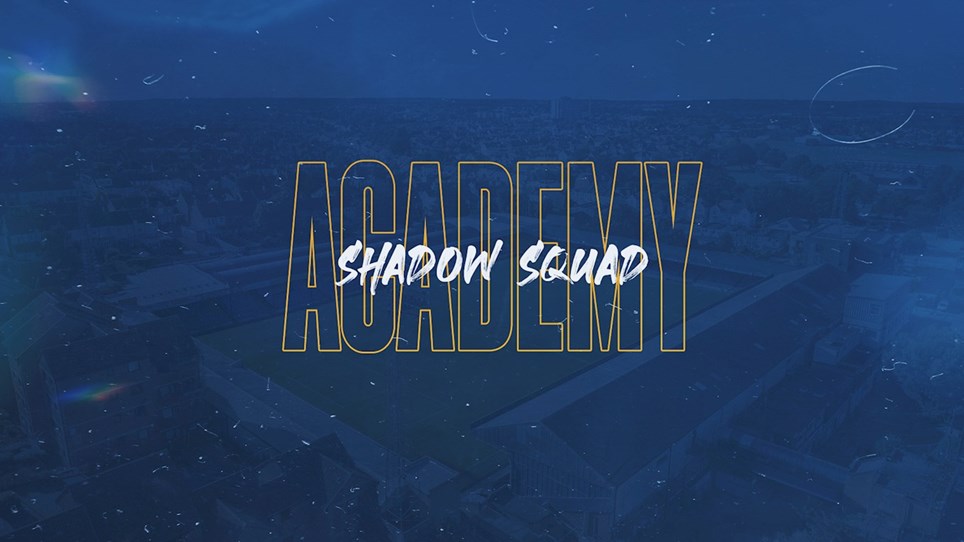 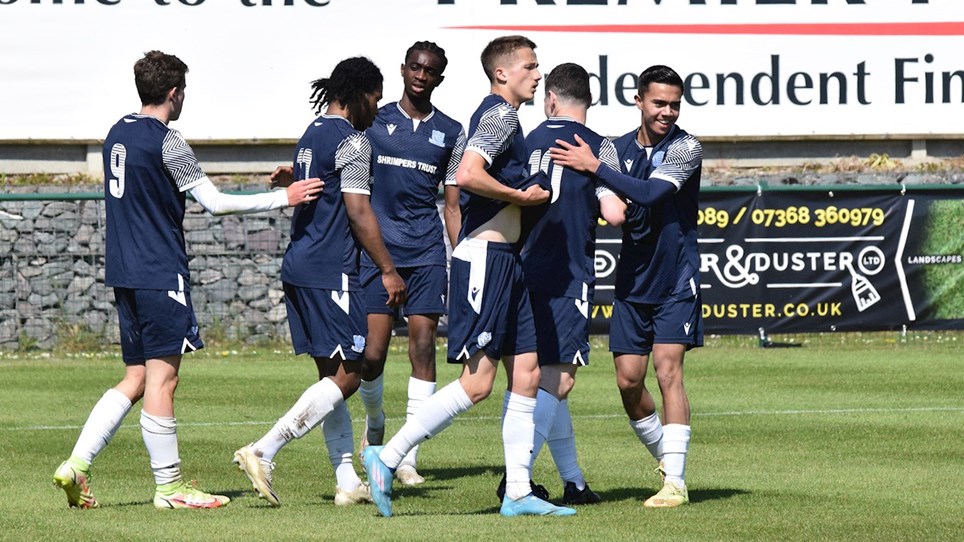 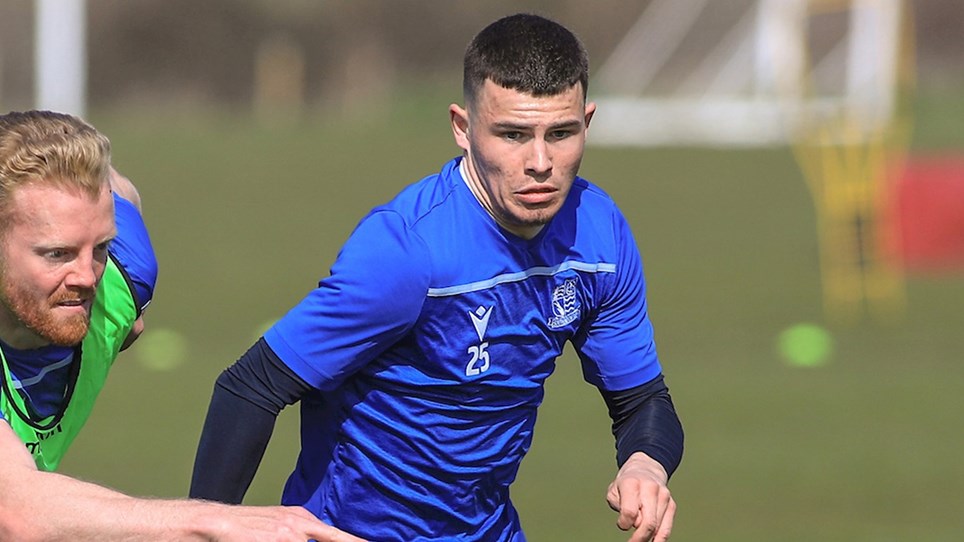 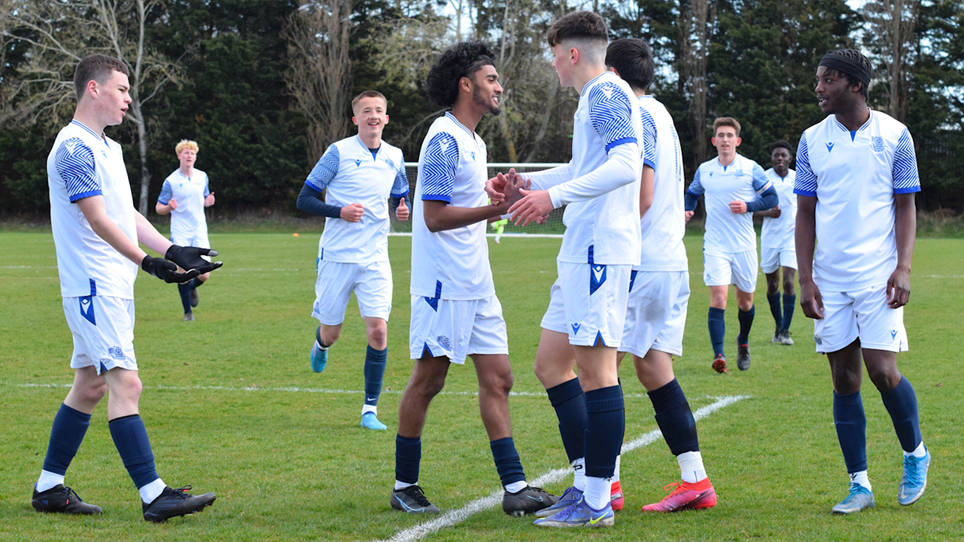