The Southend United Ex Players Association (SUEPA) continue to do so much more than just grow their impressive membership list (which now stands at 327 former players/coaching staff).

The SUEPA motto is ‘Creating New Memories’ and on their regular posts on their Facebook and Twitter pages we have seen two recent examples of where a small act of kindness can have a real positive impact but doing just what that motto says.

Last month one of SUEPA’s Facebook followers (Jacqui) got in touch saying that a client of hers (Gary) who she was carer for was the nephew of former Shrimper Lou Costello (who had served us with distinction from 1957 to 1965 making over 250 appearances).

She asked SUEPA whether they had any pictures of Lou, so they had a search and duly posted them up. Jacqui showed the pictures to Gary who was overjoyed to see them. Being the lovely Shrimper that she is, Jacqui then went one step further and got the pictures printed up for him. 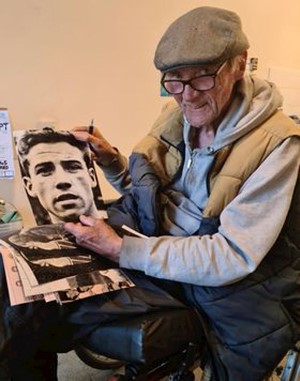 Gary is shown here proudly showing a picture of his uncle. It didn’t stop there though, another SUEPA follower saw the Facebook post, found some match programmes from Lou’s Roots Hall playing days, and these were then also sent to Gary to give him yet more treasured keepsakes of his uncle who had passed away back in 2012.

This then gave SUEPA an idea. For one of their oldest members, 87-year-old Alan Dicks (who we signed from Chelsea back in 1958), they found the original programme of his Roots Hall debut v Bradford City on eBay. This was duly purchased and sent to Alan via his grandson Joe, who visited his grandad last week to deliver the programme and take him to see a match at Bristol City (the team Alan used to manage during a successful period for the Robins in the 1970’s). Joe told SUEPA that Alan was incredibly touched that supporters from a club he left 60 years ago still remembered him.

It is little acts of kindness like this from our supporters that can really make a difference, and it brightens any day to read about such exploits.