Blues had gone into the match buoyed by victory over Oxford United in midweek, whilst the hosts had been hit by the news that proposals for a continuation of Step 2 football following the National League vote to curtail the season had been rejected by The Football Association.

Dorking had defeated Crawley Town, 3-0, in their previous friendly, and they made sure that their final fixture of the 2020/21 campaign ended in a victory thanks to a brace by Jimmy Muitt and an unfortunate own goal by Shrimpers defender Jimmy Wallace. Matt Rush’s excellent strike, originally an equaliser, proved to be a consolation for Craig Fagan’s team.

Fagan had predicted prior to the match that the non-league outfit would provide very different opposition for his squad, as well as being a good learning opportunity for his young players, and that proved to be the case on the 3G surface at Meadowbank Stadium.

In between, O’Shane Stewart’s pass for Chandler was intercepted in midfield by Niall McManus and he set up Muitt, who on this occasion smashed his shot wildly off-target. The first efforts on target for the hosts would arrive in the 14th minute when Mitchell-Nelson blocked Matt Briggs’ path towards goal and goalkeeper Collin Andeng Ndi saved the follow-up from Muitt.

The dangerous former Brighton & Hove Albion Academy player eventually gave Wanderers the lead in the 21st minute. This time Freddy Eastwood misplaced a pass in midfield and McShane pounced on the ball to set up Muitt, who rounded Andeng Ndi before slotting into the net from a tight angle.

The hosts looked to seize on the advantage, and Briggs continued to cause Ide Osimeh issues down the Dorking right. He advanced into the penalty area midway through the first half before second-year scholar Wallace stepped in impressively to break up the attack, and a few moments later Andeng Ndi also showed good anticipation to beat Muitt to a lofted through-ball and clear the ball out for a throw.

Another attack in the Blues left-back position saw Muitt’s cross almost pick out McShane in the 26th minute, with Chandler doing well to put the attacker off. The ball then dropped out to Wes Fogden, who won the ball in a tackle with Eastwood and cut across his shot to send it dipping against the crossbar. The rebound fell to Muitt, whose attempt was charged down by Osimeh and gathered by a grateful Andeng Ndi.

A nonchalant header by Rush from Andeng Ndi’s long goal-kick almost caught out Dorking goalkeeper James Howes, dropping just the wrong side of the post, before the prolific marksman equalised in the 34th minute. Osimeh’s throw found its way to Rush, who beat three men on the edge of the penalty area, taking two out of play with a delightful drag-back, and then slammed a precise finish into the bottom left-hand corner.

Blues now had a foothold in the match, but their endeavours were undone within the space of a couple of minutes just before the half-time whistle. First, on 39 minutes, Chandler was adjudged to have brought down Fogden and, despite his protests that his opponent was grabbing his shirt, the referee pointed to the penalty spot. Muitt did the rest, converting from twelve yards in spite of Andeng Ndi’s best attempts to distract him.

Barely sixty seconds had passed when Blues felt aggrieved again, this time as they believed Eren Kinali had been fouled in the Dorking half. The appeals fell on deaf ears and the hosts went on the attack, with Muitt’s shot blocked by Mitchell-Nelson. The ball was deflected away from goal, but then ricocheted off Wallace and into his own goal.

Dorking started the second half well, with Andeng Ndi patting down McShane’s attempt after he was picked out by substitute Jamie O’Hara’s pass in the 49th minute. Shortly afterwards another replacement, Jake Gallagher, slotted home a Briggs centre, but the assistant referee’s flag had been raised as the ball had drifted out of play.

Blues needed an early goal to get back into the contest, and Rush looked the most likely to deliver it. On 52 minutes he twisted inside and out before being robbed of possession by the indefatigable Briggs as he prepared to unfurl his shot, and three minutes later he was denied by Howes at his near post after seeing an initial attempt charged down by a defender.

At the back, Southend continued to work hard, with Wallace impressively winning the ball from Muitt as he tried to complete a hat-trick and Andeng Ndi making a smart stop at his near post to keep out an attempt from James Dickson. Daniel Gallagher also dragged an effort wide for the home side during this period.

Fagan introduced more youth teamers in the shape of Oli Coker and Cameron Brown, as well as third-year scholar Sam Brogan, and Brown saw a 20-yard attempt charged down after the ball was laid into his path by Rush in the 69th minute.

First-year scholar Kenny Coker and trialist Recko Martin were also brought on later in the second half with Andeng Ndi saving Muitt’s shot, delivered with the outside of his right foot, and then watching O’Hara pull a speculative 25-yard strike wide.

Wallace again did well to prevent a forward from dribbling past him in the penalty area late on, but Blues had the best chance to snatch a goal during the closing stages when the central defender brought the ball stylishly out of his own half and Rush saw his effort brilliantly tipped away by Howes at his near post. 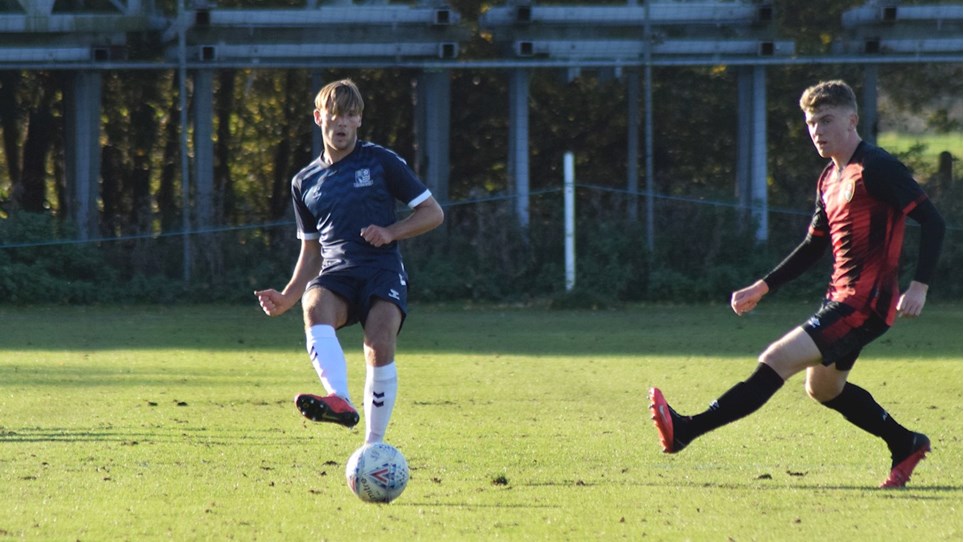 
Southend United U23s returned to competitive action on Tuesday with a 4-0 away defeat to AFC Bournemouth in EFL Central League Cup Group A. 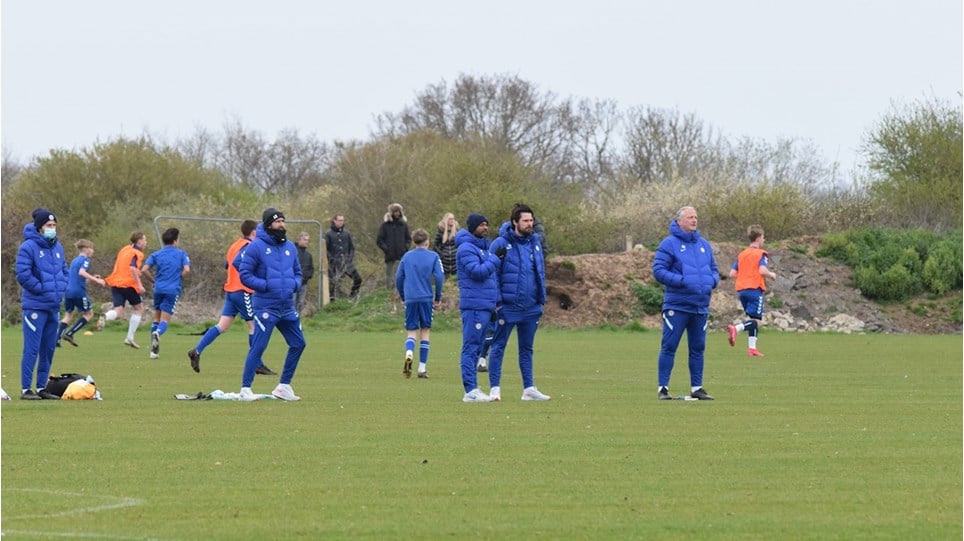 
Southend United U16's were given the opportunity to test themselves against Premier League outfit Chelsea on Saturday as the London club visited Boots & Laces. 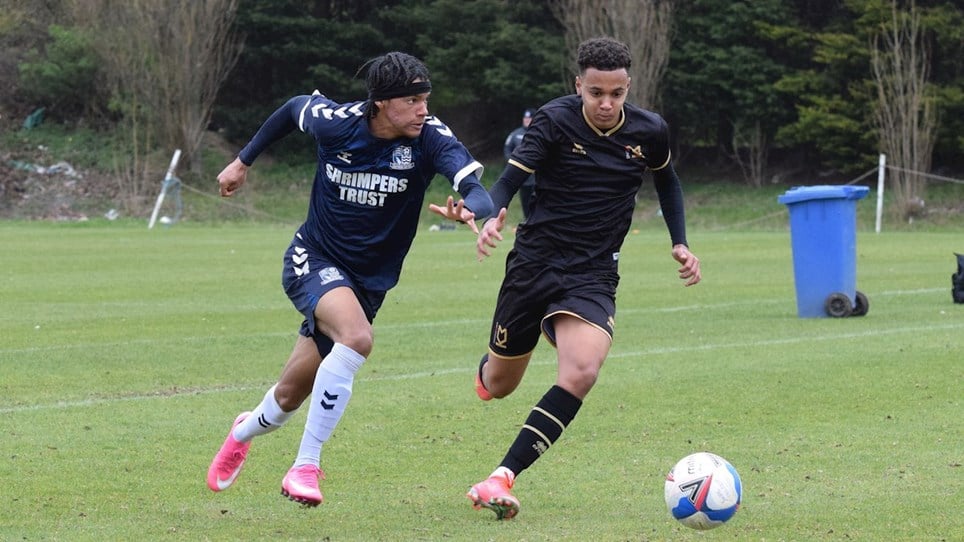 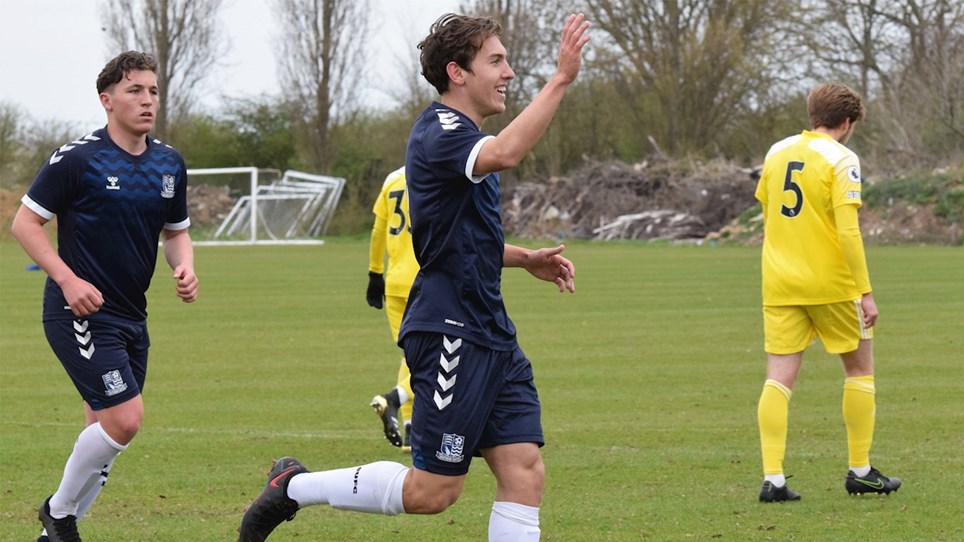 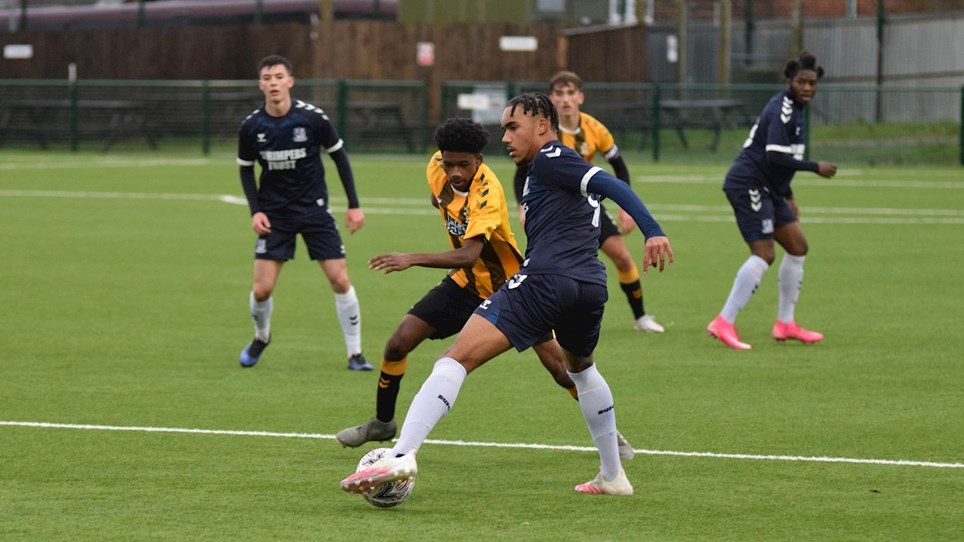