By the time Paul Napper attended his first ever game at Southend on the opening day of the 1982/83 season against Lincoln City, it’s fair to say that the tradition of being a Shrimper had long been established in his family.

As Paul, 45 from Kent, explained, “My Nana and Grandad were at the first ever game played at Roots Hall v Norwich City in 1955, and whilst Grandad didn’t really enjoy it and didn’t go again, Nana Irene loved it and followed the club for over 45 years, going to every home game with my Dad Rick, Uncle Dave and myself until she sadly passed away in 2001.

“Nana was a good friend of Frank Gill, the club matchday announcer (and chairman of the Supporters Club) and Ken, who used to provide commentary for blind fans back then too, both of whom older fans may remember.

“My Dad’s company CN Metals also had an advertising board at the ground in the 1980s and in addition to individual matches, they also sponsored Alan Moody during the Fourth Division Championship winning season too, and we still have the kit he wore, a signed menu from the celebration dance and the letter he wrote to Dad thanking him for his support too.  When my daughters Heidi and Abigail were younger, they would also occasionally come to games with me and there has always been a huge family involvement during my years as a Southend fan” he added.

“Many at Southend will also no doubt remember my wife Laura’s brother Steven Hurren. Steve was also a long-time fan of the club and season ticket holder in the South Upper. He was certainly a character (as anyone who knew him or sat near to him would testify) becoming almost legendary as “LDN Fatso” and the “King of the Red Rep” on Shrimperzone prior to his passing in 2014. His funeral passed by the ground to an ovation & we held his wake afterwards in the East Stand. Steve is still very much missed at Roots Hall to this very day.”

Paul himself has been involved in many ventures relating both directly and indirectly to the club over the years, including writing regularly for the match programme, articles for the Echo, a long-term stint as a member of the Shrimpers Trust Board, helping with the establishment of www.shrimperzone.com and as a regular contributor on SUFC matters on local radio.

With regard to the latter, it was on one such occasion and after what he described as “a late night out” he was on the way to the train station going to work when his phone rang and he found himself live on Essex FM being asked “his reaction to last night’s result” on air by the sports reporter…

“It was an away game and to be honest, after getting home late I’d not checked the result and actually even forgotten we were even playing. Talk about being put on the spot. I realised I could hardly say I didn’t have a clue about what had happened in the match and just gave really bland answers to the questions put to me. It wasn’t a great interview to say the least, but I think I just about got away with it,” he laughed.

Following a resurgence of interest in the club’s fortunes after Steve Tilson replaced Steve Wignall and the subsequent LDV run in 2004, that would eventually take the Shrimpers to the final of the competition, as part of his media duties at the club, Paul (along with Dave Scriven and Paul Yeomanson) was invited by Breeze Gold FM Radio (pictured above) prior to the quarter final game v Queens Park Rangers to discuss the game live on air. Good natured banter followed and when asked for a prediction of the score, Paul predicted a 5-0 win.

“As QPR were around the top of the division above at the time it was somewhat optimistic to say the least and the presenter said that if we won, we would be invited back to discuss the game with Colchester United fans as they had just got through. We won 4-0 and we did go back but the Colchester fans didn’t actually show up, so the show was basically us as Southend fans just sitting there talking amongst ourselves,” he recalled with a laugh.

Since the establishment of the Southend United Ex Players Association (SUEPA) in 2018, Paul has been very much involved in tracing former Shrimpers & responsible for many “signings” to date.

“I really enjoy it and there is a lot of satisfaction in tracking someone down and getting them to join SUEPA. So many are really happy to be remembered too, though sometimes in the past the phone has rung and I have had to pinch myself when I realise that I am actually speaking to one of my Southend heroes – as happened not that long ago with Steve Phillips and my all-time favourite player, Richard Cadette,” he said laughing.

When asked about his favourite memories and the games that stood out most for him over his time following Southend, Paul replied: “The Tilly and Brush years without a doubt. The double promotion was magical and gave the town and the area such a great boost also.

“With regard to games, whilst many would obviously go for Wembley in 2015 and the Manchester United win, as brilliant as they were, a lot of my best memories have been away matches with my friends over the years that stand out as being memorable and for various reasons, just great days out – a 2-1 win at Notts County with both goals being scored by Adam Barrett, a trip to Exeter City we went on and another game at Macclesfield Town in 2001, when so many of us made the trip up north (picture below). 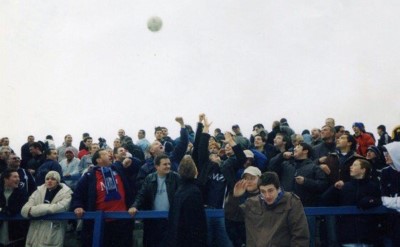 “The Fifth Round of the FA Cup at Hillsborough v Sheffield Wednesday in 1993 was another really great day. We found a brilliant little bar on the way back that we enjoyed being in so much that we visited it again on another away trip up north not long after, though I have to say I don’t remember where it was now unfortunately.”

When discussing players and who would ultimately make his “SUFC All Time Great XI” Paul said he had given the matter a lot of thought and “whilst it would be easy to just to pick all the usual names like Freddy, Stan, Chris Powell etc. I am going to take a totally different stance to others on this one and select players I consider always put in a real shift when they played for Southend and this is my team”…

Like so many of his family before him, Paul Napper is a Shrimper to the core. He has contributed greatly to Southend United over many years now and is without a doubt, a credit to the club in every way. #COYB

Taken from the Grimsby programme. Click here to buy a copy.

To order a copy of this weekend's Barrow programme, click here.