"I started to get interested in football during the 1982 World Cup, however my mum wasn’t keen on me going to games during that time with hooliganism so rife. But from the time I first walked into Roots Hall for my first game as a 15-year-old v Crystal Palace in the Rumbelows Cup on 9th October 1990, I was hooked.

"I loved the vibe of the place and it was wonderful to experience the special atmosphere of a night game under lights for the very first time. We were 8-0 down after the first leg and my memory of the game is that it was a spirited 2-1 defeat with Bretty Angell scoring a consolation goal with us 10-0 down on aggregate,” Simon laughed.

Simon, 45 from Westcliff, is a Credit Analyst in Corporate Banking in London and as well as being a club shareholder and life member of the Shrimpers Trust, is a regular in the West Stand with his son Ryan. "I started in the East Stand Paddock, then North Bank, then South Upper then East Greens before West Family Stand.”

It’s fair to say that Ryan has indeed now inherited his love of Southend from his dad - something that is obviously a source of great pride to Simon. "My all-time favourite game has to be Tuesday 26th December 2017 when I brought Ryan to see our Thames Estuary Galactico’s for the very first time; a 3-1 home win [against Charlton Athletic] and I absolutely loved sharing the moment with him. A great afternoon that started him on the road to being a football obsessed near 10-year-old, Junior Blue and soon to be season ticket holder too.”

With regard to his other favourite games over the years – "Bury away, when Benji put the ball in the Bury net – even though I wasn’t there. I was working in a butcher shop at the time and listening to the game on the radio. When Benji scored I went absolutely mental and it is fair to say that when the customers in the shop heard this, they were more than a bit perplexed,” he laughed. "The Manchester United game too for obvious reasons. I can still see Freddy lining up that free kick now…” 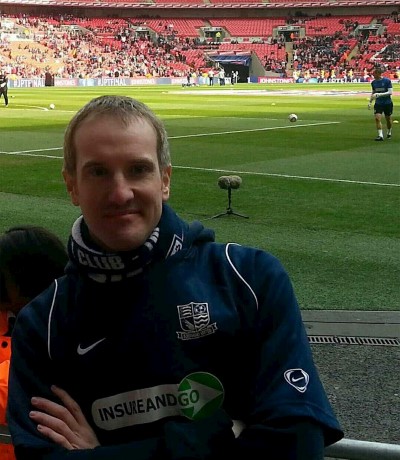 His worst memory of his time as a Shrimper? "The relegation season under Ronnie Whelan in 1997. The team promised so much but delivered so little,” he remembered.

"There are loads of stories over the years following Southend, but one that stands out in particular is an away trip to Sunderland in 1995, which obviously due to the distance involved is never a quick trip. It was Mike Marsh’s debut and although we lost 1-0, it really wasn’t a bad performance at all.

"On the way back it was pretty apparent that the coach was having problems and it started to struggle a bit down the A1. We got to the M11 and it got worse, limping on to the A127 before it finally gave up the ghost. I had to get my parents to come out and pick me up from Laindon and drive me and a couple of mates back to Roots Hall so I could pick up my car.  The journey seemed never ending but actually took over eight hours in all. I chatted to loads of people on the coach and am still friends with many to this day as a consequence. Sort of sums up being a Shrimper really…”

"In the book Fever Pitch by Nick Hornby, there is a bit where his mum tries to chat to the main protagonist about football and his favourite player, Charlie George, over dinner. My mum has done that many times over the years, starting with Brett Angell and more recently about Elvis Bwomono, being an international and all that,” he laughed.

"Bretty Angell is certainly my all-time favourite SUFC player. Never the quickest, never the most skilful but hey, could he score goals?! New Years Day, 1992 v Newcastle United and the 4-0 win at Roots Hall. Bretty didn’t do much in the game at all apart from score twice.

"The goal he scored v West Ham in April 1993 wasn’t bad either – a decent cross from Stanley too. Talking of Stanley, like so many others, I would have to say that he is the best player I have ever seen in a Southend shirt bar none. Absolute quality in every way”

When asked to name his “Best Ever Southend XI” Simon replied that “it was the hardest question ever, but I’ve given it a go & in a 4-3-3 formation…”

"With apologies to players such as Dean Austin, Paul Clark, Ricky Otto, Andy Ansah and Ryan Leonard (“it certainly upset my son Ryan a bit that I left out Lenny - his favourite player”) – amongst others.  I went with the front three and built backwards!!”

A true Shrimper in every way. Simon is a supporter of whom Southend United can be very proud indeed to call one of their own. #COYB

This Supporter Spotlight was featured in the Barrow matchday programme. Click here to buy a copy.

To order a copy of Roots Review for the visit of Walsall this weekend click here.

Want to be featured in 'Supporter Spotlight'? Email media@southend-united.co.uk and we'll point you in the right direction.