When 12 year old Dave Brabbing walked into Roots Hall with his cousin Graham for the very first time for the game v Torquay United in January 1962, he could never even have begun to imagine that this was just the beginning of his lifelong love of Southend United, a love that burns strong all these years later with Dave still a season ticket holder in the East Stand.

Dave (also known as “Nobbler”) is a very familiar and much beloved figure to Southend fans with an almost encyclopaedic knowledge of the game and host of stories from his time following the club.

A life member of the Shrimpers Trust and Supporters Club before that (where he served as Chairman) Dave was featured in the club programme v York City in 1970 in an article written by former Southend player Alf Smirk, then a reporter on the Southend Standard. 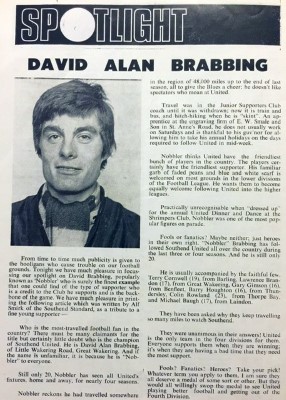 With over 50 years now having passed, this is now produced here once more and with that it gives us a great opportunity to look back retrospectively at Dave’s time as a Shrimper, a period that covers such a large part of club history.

The article, written when Dave was just 20 years old, bears testament to what a great supporter he has been but also to the unsung heroes (some are also still regulars at Roots Hall to this day) and friends he travelled with back then – Mick Thomas, Charlie Benson (whose son Paul played for Dagenham & Redbridge, Charlton Athletic, Portsmouth, Swindon Town & Luton Town amongst others) John McGill, John Elliott, Terry Day, Lawrence Brandon, Terry Cornwall, Melanie Thompson, Gary Gimson, Barry Houghton, Colin Rowland and Michael Baugh.

Dave also recalled a game v Workington Town, a Friday night game in 1970 when he was the only Southend fan in attendance. Having made his way to Borough Park “under his own steam” (not always regular coach travel run by the club in those days) upon arrival he saw Blues Mike Beesley, who asked him how he was getting back after the match. When he said that he had not made plans yet to travel back, Mike promised “he would try to sort something out for him” and disappeared.

He quickly returned and said he had told manager Ernie Shepherd about Dave and he had agreed to let him come home on the bus with the team afterwards. “We lost 5-0 that night and I think it was probably a good thing Mike asked Ernie before the game and not after it as he certainly wasn’t happy on the way back after that result, and actually had the players in for extra training just a few hours after we got back. He also made it very clear to me that if I was travelling with them to keep quiet and out of the way & that whatever I heard on the coach was to stay on the coach,” Dave remembers.

Another eventful hitchhiking journey for Dave was a trip to Scunthorpe United away in April 1969 with his friend Mick Thomas. Having waited quite a fair while and not managed to get a lift they spotted the team coach passing by on its way to the match. Ernie Shepherd saw them, told the coach to pull over and picked them up. It was only when they arrived in Scunthorpe that they were told the game had been postponed and the return trip back to Southend shortly followed. The story does not end there, however, as when the game was re-scheduled for May, Dave and Mick hitchhiked once more and as Dave recalled “we were in exactly the same spot as before when we saw the team bus in the distance again and knew they would stop if they saw us but we didn’t want them to think we were taking the pee, so we hid in the bushes until they passed” – so many memories and always remembered with a smile.

Dave is still in contact with many of the players of that era and several have become close friends, most especially his all-time SUFC hero Billy Best, Gary Moore, Mike Beesley (who first took Dave under his wing as a teenager with complimentary tickets and lifts to games in his car) Derek Spence and Ronnie Pountney. He is also a very good friend of Liverpool, Newcastle United & England legend Kevin Keegan, who not only gave him his NUFC match worn shirt directly after his ever last match in London (v Charlton at The Valley in 1984) but also sent him a bottle of champagne on his retirement from the Post Office in 2009 and a most beautiful cake as a surprise gift for his 70th birthday last year.

Married to his wife Linda for over 30 years and living in Southend, Dave is also a long time Rolling Stones fan and has followed the band with the same loyalty and dedication he has always shown SUFC. 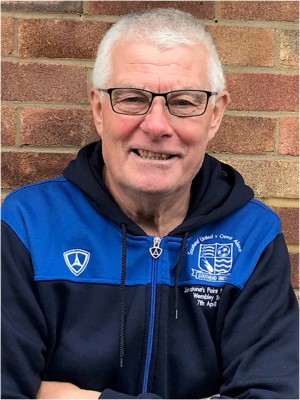 Of the many players and teams that Dave has seen at Roots Hall over almost 59 years as Shrimper, when asked to name his all-time favourite team he stays loyal to “his era” of 1968-1969 and whilst stating “they are not the best team we have ever had, nor in many of the positions the best players, but they are my personal favourites – Trevor Roberts, Tony Bentley, Graham Birks, Sammy McMillan, Mike Beesley, John Kurila, Eddie Clayton, Billy Best, Gary Moore, Phil Chisnall & Chico Hamilton.  Manager – Ernie Shepherd. Other players I have liked for various reasons are John McKinvern, Eddie Firmani, Terry Johnson, Bill Garner, Ron Pountney, Derek Spence, Keith Mercer, Garry Nelson, Steve Phillips, David Crown, Peter Butler, Ian Benjamin, Kevin Maher & Barry Corr”.

Some undoubted “Southend all-time greats“ in there but if you are looking for fans who have also gone on to leave their mark on the club & become legends at Roots Hall too, look no further than Mr David Alan Brabbing & you won’t be going far wrong.

Taken from the Exeter City programme. Click here for information on how to order a copy.

To order a copy of this weekend's Cheltenham Town programme, click here. 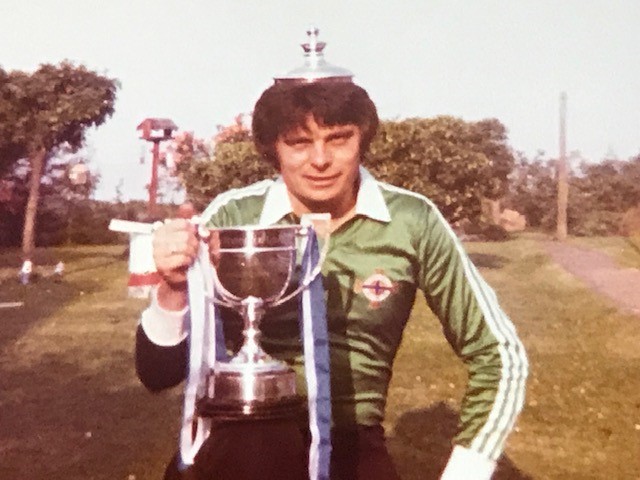 Dave wearing Northern Ireland shirt, match worn and given to him as a gift by Derek Spence, with the 1990/81 Fourth Division Championship Trophy, onto which Dave personally engraved Southend's name whilst working at Bill Garner's engraving buisness.