It is fair to say that Southend United have been fortunate to be blessed with many remarkable and loyal fans over the years, all of whom have their own unique story to tell of their time following the Shrimpers, their love for the club and the huge part that being a supporter here at Roots Hall plays, and has played, in their lives.

In the years that have passed since his first Southend game (at home to Gillingham in 1988/89), Darren Posnack has undoubtedly experienced many highs and lows supporting the club and not only has a host of stories to tell about his time following the Shrimpers, but also his years spent working as club accountant (whilst also doubling as Sammy the Shrimp and writing for the programme) at Roots Hall between 1995 and 1999, including several anecdotes relating to former chairman Vic Jobson & vice chairman John Adams, none of which unfortunately can be repeated here!

Darren, 47 from Eastwood, is a very popular and familiar figure to fans and has been a virtual ever present on the Shrimpers Trust coaches to away games for many seasons now, in fact only last season he celebrated his 500th Southend away match when travelling to Accrington Stanley – something that Stanley’s chairman, Andy Holt, got to hear of and marked the landmark by putting vegan pies on the menu specifically for Darren (a vegetarian) on the day.

The four years that Darren worked at Southend are recalled with much fondness, despite it being a pretty bleak period in the club’s history  – “As it was my job to do the wages, the players were always trying to get me drunk on nights out to try to find out what all their team-mates were earning. I always accepted the drinks but never actually ever told them what they wanted to hear,” he remembered with a smile. “There were regularly players hiding in my office trying to skive off training and away from Alvin Martin, the manager back then. Alvin was a nice guy and I got on with him very well, in fact one of the reasons I left was the abuse & criticism he received from the fans, which I really didn’t like,” he says. 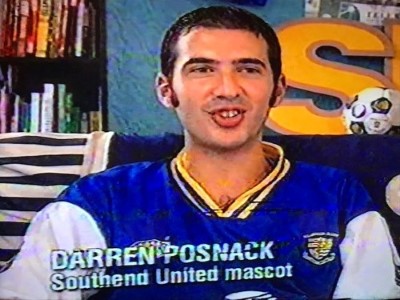 Working for the club did have its perks however, including representing SUFC on the ITV shows “Metroland” (in 1999 – pictured) and quiz “Do I Not Know That” in which he captained the team in four episodes of the programme, a memorable trip on the team coach to Hull City (following Vic Jobson’s personal invitation to him to travel with the players and directors) and the opportunity to acquire many rare pieces of Southend memorabilia for his collection.

"The people behind the scenes knew I loved to collect items relating to the club and were always giving me bits and pieces, most of which are still displayed in my house to this day.” Indeed it has to be said that Darren’s home is a veritable treasure trove of most impressively displayed items that bear testament to his love not only of Southend United, but also rock band Oasis, the history of Southend as an area and British sporting achievement in general.

The centrepiece in his collection is the match ball (pictured) with which Wayne Gray scored v Bristol City in the final game of the 2005/06 season to clinch the League One title and with it, promotion to the Championship. 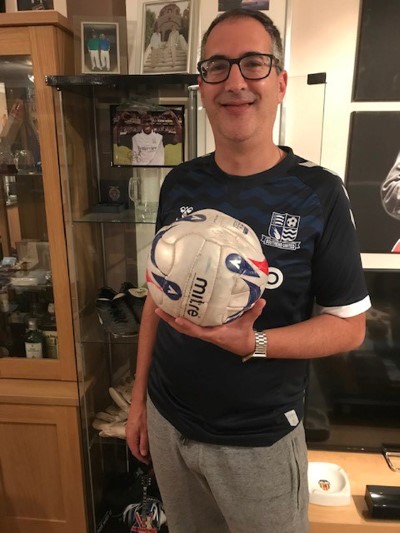 Darren is a season ticket holder in the East Greens for more than 20 years now. “When I first left the club, I chose to sit there as I used to chat to the players in the dugout during the game,” he added. He was also Treasurer for the Shrimpers Trust for 14 years before taking a break and stepping down at the end of last season.

Darren’s travels up and down the country over the years have taken him to 86 of the 92 league grounds. 83 of those grounds visited have been with Southend with Middlesbrough, Newcastle United, Forest Green Rovers, Harrogate Town, Barrow and Salford City being the only clubs he has yet to “tick off” his list.

This is even more impressive when you take into account (via his meticulously kept records) that since his very first away game, a 4-3 win at Colchester United in the League Cup in 1989/90, he has been in attendance at 107 league grounds (including clubs that no longer exist or are not in the FL anymore) and 124 grounds in all, including cup matches & ground moves etc - once again, the majority of which he visited whilst watching his beloved Southend in action.

Remembering some of his away travelling experiences over the years, Darren fondly recalled the ovation Swansea City fans gave the Shrimpers supporters departing the Liberty Stadium in their coaches on the day Southend confirmed promotion to the Championship in 2005/06.

"The roads were lined with their fans and they stood clapping us on our way after the game. It was a great end to a wonderful day, and I have had a soft spot for the Swans ever since,” he added.  He also recalled a midweek trip to Exeter City in the Auto Windscreens Trophy in 1998/99, when after arriving at St James Park he met Rob Newman (who he knew well from his time working at the club) who offered him the players complimentary tickets “as no guests had travelled.”

"I stood at the turnstiles handing out the tickets to all the Southend fans entering the ground. There were 30 comps in all, and I had three left at the end. I know for a fact that only two of our travelling support paid to get in that night,” he remembered with a laugh.

Of all the players and teams he has watched whilst following Southend, Darren classes the 2005/06 team as the best he has seen during his time as a Shrimper and after some thought, he named his “SUFC All Time Great XI” as follows –

"A pretty decent team, I think. You could certainly make a good case for Webby as manager, but Tilly just nicks it for me. Some may be surprised at my selection of Mark McNally but not only do I have good memories of him as a player but the £80,000 we received from Stoke City for his transfer made my job as club accountant a lot easier at a time when the club desperately needed funds,” he recalled with a smile.

A larger than life character, Darren Posnack is without a doubt an absolute credit to this club and a true Shrimper in every way.

Taken from the Oldham Athletic programme. Click here for information on how to order a copy.