Following Tuesday night’s disappointing exit from the Checkatrade Trophy, Blues can now fully concentrate on the league, starting with the visit of Plymouth Argyle tomorrow afternoon.

Blues will be looking to build on their last league game which saw them beat Gillingham 2-0 on New Year’s Day with a view of cementing their place in the top half of the League One standings.

Argyle, on the other hand, will travel from the South West desperate for points to help aid their relegation fears with Derek Adams’ side second from bottom in the table, three points from safety.

They though will be coming in well rested having not played since January 1st and they’ll be looking for a second successive victory after convincingly beating Oxford United 3-0 last time out.

Defender Taylor Moore has been rated as 50/50 by Southend boss Chris Powell after picking up a hamstring injury in the Checkatrade defeat to Portsmouth in midweek.

Moore’s potential absence means Michael Turner and John White will likely be paired at centre-half with fellow defenders Jason Demetriou and Harry Lennon working their way back to fitness.

Theo Robinson is suspended after his red card against Gillingham with goalkeeper Mark Oxley still out with a back injury which has seen him miss the last five matches.

Argyle too have goalkeeper issues with on-loan Arsenal stopper Matt Macey facing a race to be fit following a dead lead, with Kyle Letheren ready to deputise for Macey for a third successive game.

New loan signing Oscar Threlkeld is likely to make the squad while top scorer Freddie Ladapo is in line to make his first appearance at Roots Hall since departing Southend in the summer. 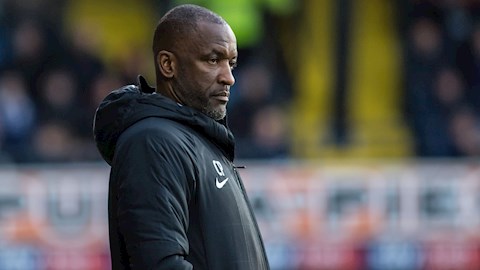 “We’re tenth and this time last year we were 17th. I look at it and see have we progressed and actually we feel we should and could have done better this season.

“We know even with what we’ve put out we’ve done better. We’ve scored more and conceded a lot less, and they’re always pointers for me. But do I think we should’ve had more points, yes I do.

“That’s the driven aspect of me and the group that actually we want more from them. We actually think we could improve more.”

“We have got 20 games to go, we are now into the run-in. We have a lot of good games to come. We have got a game against Southend away from home this week, which we are looking forward to.

“We have come off a very good victory at home to Oxford and got a good point away to Burton Albion as well, so we are looking to obviously propel ourselves up the league.

“They [the players] have enjoyed the time off because we had a busy schedule at the Christmas period, it has allowed them to spend time with their families away from Plymouth. We have come back and worked hard, we had double sessions Monday and Tuesday and are ready to go.”