An injection of new blood in the squad proved the catalyst for a superb win on the road against the Bantams and Powell wants to keep that feel-good factor going as he marks a year in charge of Blues.

But if Southend are to notch their first back-to-back wins in months, they’ll need to end Luton’s 15-game unbeaten league run with the Hatters too coming in off the back of a 4-0 win last time out.

The departure of manager Nathan Jones hasn’t appeared to have derailed the visitors push at the top of the table, with Luton currently second as they chase successive promotions.

New signings Stephen Humphrys and Sam Hart are in line to make their first appearance at Roots Hall following a successful debut for both last weekend against Bradford City.

But Chris Powell did report a couple of injury concerns, without stating who they were, from the win against the Bantams. Jason Demetriou and Harry Lennon are closing in on returns to full fitness, although neither are expected to be available until February.

Mark Oxley continues to be out with a back problem, alongside midfielder Harry Bunn and long-term absentees Tom Hopper, Ben Coker, Harry Kyprianou and Sam Barratt.

Luton striker Danny Hylton will be absent on Saturday as he continues to serve a four-game ban following his sending off against Sunderland.

Loanee George Thorne and permanent signing George Moncur will be looking to make their full debuts after coming off the bench last weekend, while Marek Stech and Harry Cornick are out. 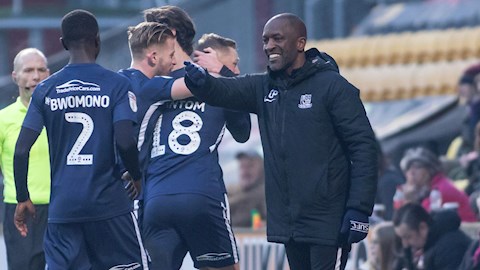 “It is and in many ways the game kind of takes care of itself. We’re playing against a side that have been unbeaten for a long time now and we know we’re going to be up against it regardless of what has gone on regards to losing Nathan Jones.

“Nathan is a coach I know really well from my Charlton days and he did a terrific job with them with regards to where that club was when he went in, to the momentum they’ve got from going up last year and carrying that on.

“I don’t see them changing much and why should they but when those teams come to town we have to turn up.”

"[When I took over] I thought I may as well enjoy it, it's a great challenge. The reception the fans have given me, it's something to really, really cherish and enjoy. It's very, very humbling in terms of when I walk across that pitch. But it's the players who put in the performances, they've been brilliant.

"Am I enjoying it? Some days. It's a challenge and I'm going to embrace it and do the best I can.

"The players are the ones that go out there and get the results. We can just point them in the right direction, we can give them a bit of guidance. But at the end of the day, they're the ones who have to go out and put in performances like that. I thought they deserved every accolade that was thrown at them by me and by the supporters."