Southend United Football Club are delighted to announce its decision to freeze season card prices for the 2019/20 season.

Blues fans can pledge their support for next season starting from now until 5pm on Tuesday 9th April to guarantee the fixed price for what will be the fourth consecutive year.

Buying in the early bird window will not only ensure three FREE guest tickets once again, but also entry into a special prize draw.

There will be two prizes up for grabs in the first week (25th February – 3rd March) and then a prize launched per week for the remainder of the early bird window.

Supporters who renew in the early bird window will have the chance to win the prize on offer during the week they purchase, as well as being automatically entered into the draw for the following weeks, therefore the earlier you renew your season card, the more prize draws you will be entered into.

The prizes on offer are:

- Win your money back - Carl Abernethy

The first prize winner will be announced on Monday 4th March, and every Monday thereafter.

Blues boss Chris Powell said: “With a number of long-term absentees returning to the fold in the 2019/20 season we are optimistic that we can look ahead with real hope. I’m convinced we’ve taken steps in the right direction this season which we will build on next.

“Thanks for your support and long may that continue.” 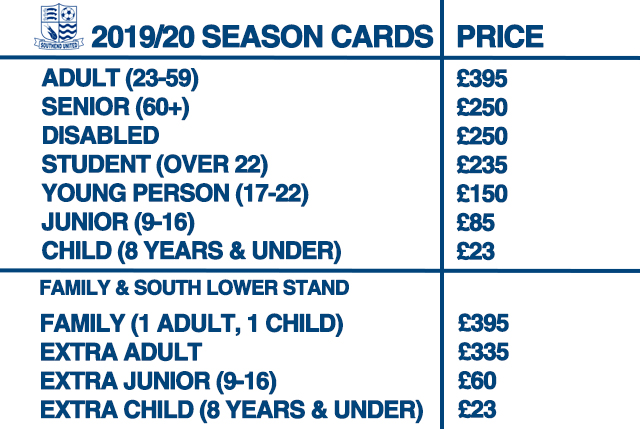 If you wish to pay by 10 monthly instalments, you’ll need to complete the application process via the Zebra Finance link. Please note that, forms will be available in the Ticket Office in due course but we urge fans to apply online.