Blues return to League One action tomorrow afternoon as they welcome Bradford City to Roots Hall looking for their first maximum of the season.

An opening day defeat to Doncaster was followed up by a well-earned draw away at Plymouth and Southend boss Chris Powell will be hoping that it’s third time lucky come Saturday.

Bradford, like Southend, head south off the back of a Round One exit in the cup on Tuesday night and they’ve made an up-and-down start to the league with one win and one defeat.

Captained by former Blue, Josh Wright, the Bantams will be looking for a repeat of their last visit to Roots Hall back in December and notch their second win of the campaign.

Blues midfielder Sam Barratt is out with a knee injury picked up in training last week. Although the prognosis isn’t known on the youngster, he’s expected to be out for a long period of time.

Fellow midfielder Luke Hyam is touch-and-go as he continues to recover from a hamstring injury while centre-back Harry Lennon is still recovering from a broken toe.

Shawn McCoulsky however, on loan from Bristol City, is in line to make his first league appearance for Blues having scored on his debut in Southend’s Carabao Cup defeat to Brentford in midweek.

Chris Powell did also add that there was an illness in the camp that had affected three players, but hopefully they will be able to overcome that in time for the game.

Bradford will be captained by former Blues midfielder Josh Wright as he makes his first return to Roots Hall after his release from the club in the summer.

Tyrell Robinson will be absent for the visitors after he was suspended during the week, although the club has failed to comment on the reasons why the 20-year-old has been expelled. 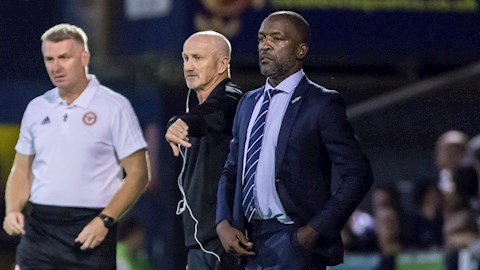 “The majority of our fans that have seen all three games, or especially the first two, will see we are better when we’re a front foot team. I’m upset because we haven’t had a clean sheet yet, and that’s the defensive managerial head on me, but I’m sure our fans want to see us scoring goals.

“We have to score to win games and we’ve got players who can finish but at this present time I would just prefer us to get a result.

“It is very early and we’ve got 44 massive games left, but you always want to get up and running and get in the groove.

“If it starts on Saturday then great, if it doesn’t we won’t panic. We’ll just carry on doing the right things because inevitably it will turn in your favour.”

“It’s interesting because last season they were a big physical challenge,” he said. “This season they are more of a footballing side who look to play.

“They carry threats but like any team in this division, they’ve got areas you can capitalise on.

“We were bitterly disappointed by the result on Tuesday. It was a game we had earmarked to win. We wanted to win it.

“But there were certain elements that I saw progress in and we can build on.”