Southend United face a huge test on Saturday afternoon as they travel to Ewood Park to take on the League One leaders Blackburn Rovers.

Blues’ opening day win against the former Premier League champions seems a long time ago now but Southend will travel to Lancashire in good spirits after Monday’s 4-0 win against Gillingham.

In their way will be a Rovers side who are in a rich vein of form, winning seven of their last eight, and they’ll be looking to take another giant step towards a return to the Championship.

Tony Mowbray’s side is currently one point ahead of Shrewsbury and two ahead of Wigan, but the Latics have a game in hand, so every point is going to be crucial in the race for the title.

Blues go into this weekend’s trip to Ewood Park with no fresh injury concerns following the 4-0 hammering of Gillingham on Easter Monday.

Boss Chris Powell has a number of selection headaches to consider, including whether to continue with Theo Robinson up front after Monday saw him score on his first league start since October.

Marc-Antoine Fortune – who was rested for the game against Gills – will be available again on Saturday with long-term absentees Rob Kiernan and Ted Smith still out.

Danny Graham is fit and raring to go having returned from a back injury to set up both goals in Blackburn’s 2-1 win against MK Dons on Easter Monday.

Rovers will assess defender Darragh Lenihan following a recent knock but Ryan Nyambe and loanee Harry Chapman will both miss out. 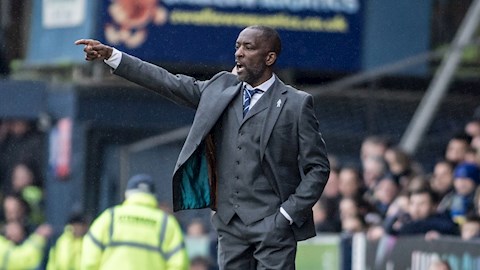 Preview: "We need to learn from Plymouth defeat", says Powell

“The onus will be on them and we can’t be too open. We’ve got to make sure that we have a disciplined performance from the team, from units, from individuals and we’ve got to be quite patient.

“They’ve settled into the league really well and are now justifying their pre-season favourites tag. They’ve got players who are a good standard, are of good quality - Championship quality - but so have we.

“They’re up there for a reason; because they score goals, they create goals, have picked up points in games where maybe they shouldn’t, that’s always a sign of a good side.”

“It doesn’t matter about the shirt, it’s about competing against the next 11 players. Whether it’s the third game in the week or not, we have to get the job done, so let’s continue that.
“Each game at home is very difficult. It’s very rare to run away with games, as the last home game showed. It was tough before we scored against Bradford. Teams raise their game when they come to Ewood to take on Blackburn Rovers.
“Every game requires total focus, so if we can continue that then there’s a strong chance we’ll come out on top.”

We have sold over 500 tickets out of our initial allocation.

Want to join the hundreds of supporters making the trip on Saturday? Pay in advance to save!