Dru Yearwood was delighted to make a first league start for Blues on Tuesday night.

The 17-year-old Academy graduate started the Carabao Cup First Round tie against Newport County, before making his league debut against Rochdale.

But after his first start for the club, the young midfielder is hoping to kick on and make many more appearances this season. 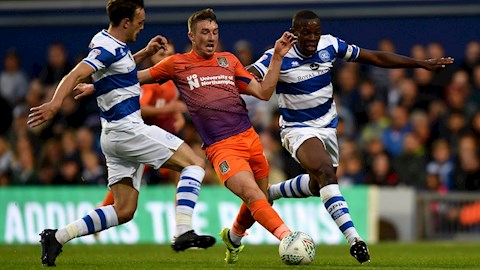 Yearwood said: “I really enjoyed it. It was a good game to be involved in but we were unlucky with the result. Our luck is going to change soon.

“It came as a little bit of a surprise [to get a start].

“We found out on Monday but I just took it in my stride and tried to go out there and show what I can do.

“You take it as confidence. When the gaffer gives you a start, it gives you the confidence because he has it in me to start games.

“I don’t want to let him down, or let the fans down, obviously your family will be watching sometimes, although Tuesday was a bit too far for them!

“You just want to go out there and make the fans happy.

“I’ve been involved in the squad this year and played a bit before already so I don’t really struggle with the physicality anymore. Training every day with the squad as well makes it easy.”

Yearwood has broken into the first team this season after appearing in the U18 side last season.

He signed a long-term contract in the summer, and added the squad have been integral in his integration into the first team.

“To be honest, I still feel like an under-18 playing with the first team, but I get on with everyone and that’s the main thing.”

Asked how helpful Ryan Leonard and Michael Timlin were on Tuesday, Yearwood said: “They were both unbelievable. Lenny will cover you and Tim’s will talk you through the game regardless, so it’s easy to play with both of them.

“I’m looking to get a start on Saturday, playing more and getting more of a better relationship with them on the pitch. That’s what I’m looking for mainly.”