Southend United will be looking to bounce back from a miserable afternoon against Doncaster Rovers last weekend but they face an arduous task as they travel to second-placed Wigan Athletic.

Prior to last Saturday, Blues were on a run of five games undefeated following four successive wins and they’ll need to be at their best if they’re to take anything from their visit to the DW Stadium.

Wigan sit just two points behind table-topping Shrewsbury going into this weekend and are unbeaten at home so far this season with five wins and one draw from their six league games.

The Latics are also the joint second highest scorers in the division with 22 goals which will make worrying reading for Brown as he travels to the DW with his defensive options depleted.

Anton Ferdinand will miss the trip to Lancashire as he serves the first of a two-game ban following his red card against Doncaster with Harry Kyprianou also out after he hobbled off with a thigh injury last weekend at the Keepmoat.

Blues will be able to call upon Jason Demetriou as he returns from international duty whilst John White is likely to be paired at the back with Michael Turner who is set to make a surprise return having missed the entire season so far with a hamstring problem.

Rob Kiernan continues to be missing and will travel to Sweden to see a specialist about his knee injury whilst fellow defender Ben Coker and midfielder Michael Kightly also remained sidelined. 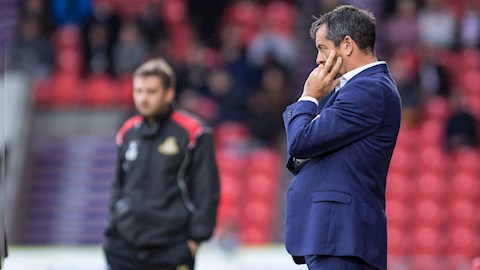 Phil Brown on the teams response and Wigan

“We’ve got back to back games against two sides who are really in form, none more so than the one we face on Saturday.

“It’s a big challenge for us and one where we can put a marker down where this season is concerned and certainly put the Doncaster game behind us. It’s a good opportunity for people.

“Cooky has gone back home as it were from Portsmouth and his teams like to play the right kind of football.

“He’s got Peter Reid alongside him with vast experience. There’s lots of things to admire about them but we’ve got to go there and execute the gameplan and hopefully come away with the spoils."