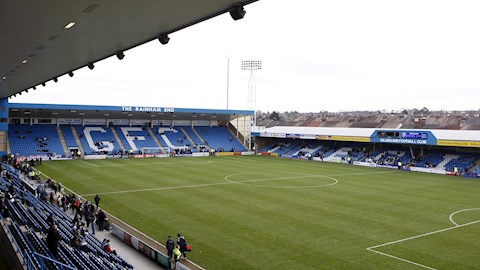 Zakuani started his career with Leyton Orient in 2002 and was there for four years before signing for Premiership side at the time Fulham for around £1,000,000.

He only made two appearances for the side as he was mostly on loan during his stay at Craven Cottage, firstly with Stoke City.

His other loan spell was at Peterborough where he put pen to paper permanently on 2nd January 2009 and he went onto make over 200 appearances over the three stints which included a move back to the Posh after a few months at Greek side Kalloni.

Liam Nash signed for Gillingham after impressing on trial this summer.

He was previously at non-league side Maldon & Tiptree where he fired an impressive 37 goals for the Isthmian Division One North side.

The 21-year old started his career with Maldon & Tiptree last season, featuring in 41 of the non-league side’s games in his first season.

He went on trial with the Gills at the beginning of this season and continued to impress manager Adrian Pennock.

The fans instantly took to the young talent during his pre-season games before he eventually earned himself a contract on 21st July 2017.

Josh Wright has become an integral part of Gillingham’s starting XI since signing for his second spell at the Kent side back in August 2015.

Last season he scored 14 goals for the Gills, two of which came in the 2-1 win over Blues at MEMS Priestfield Stadium.

He was integral in their survival in League One for this season, which also memorably included a hat-trick against Scunthorpe United in a 3-2 win, all coming from the penalty spot.

Although he is yet to get off the mark this season, he is certainly a threat from midfield.