Southend United head to Altrincham in the Vanarama National League on Saturday hoping to get their first away win of the season since beating King’s Lynn on the opening day.

We've taken a look at the Altrincham squad Blues will be going up against this weekend and picked out three players to look out for.

One man Southend will have to be wary of is Ryan Colclough. The former Wigan and Scunthorpe man joined the Robins in 2020 and is currently Altrincham’s top goal scorer in the league, with four. Colclough has come up against Southend four times before in his career and has never scored. The winger has also never been on a winning side against Southend, drawing once and losing three times.

Ben Pringle is another player who will hope to stop all three points returning to Essex. The 33-year-old said in the summer that he turned down EFL offers to join Altrincham and has missed just three games since joining. The midfielder can be a bit of a hothead, with three yellow cards and a red to his name this season.

The winger has been in fine form recently, helping the Robins to a 4-1 win v Weymouth and a 2-2 draw away at Chesterfield in the last two. In that time, Kosylo has scored three goals and will be hoping to continue his form against Kevin Maher’s Southend.

Blues picked up a huge three points on the road against Altrincham as first-half goals from Rhys Murphy and Sam Dalby secured a hard-fought 2-1 win at the J Davidson Stadium.

Southend got off to a flyer, scoring inside the first minute as Murphy bundled the ball in following a shot by Louis Walsh. And Blues would double their lead before the interval when a well-worked free-kick routine allowed Dalby to get in on goal and score Southend’s second.

A double change at the break from Altrincham allowed them a foothold in the game and after Ryan Colclough’s penalty was saved by Steve Arnold, they reduced the arrears through substitute Dan Mooney, but Kevin Maher’s side stayed firm to see the game out and pick up a vital three points.

After an unexpected, extended break following the postponement of Tuesday night’s clash with Maidenhead, Kevin Maher’s side travelled to Altrincham for a first-ever meeting with the Robins looking to pick up their first away win under his stewardship.

Maher made two changes from the side that lost narrowly to Grimsby last time out with Nathan Ralph coming in for John White and Sam Dalby partnering Rhys Murphy upfront, in place of James Dunne.

And in freezing conditions, Blues got off to a hot start as they opened the scoring inside 40 seconds with Murphy bundling Southend in front. Ralph’s cross from the left found its way through to Louis Walsh whose cross-shot was diverted in by Murphy to give the visitors the ideal start.

Altrincham responded to the early setback well, commanding the bulk of the possession without really troubling Steve Arnold in the Blues goal, with headed efforts from Toby Mullarkey and Tom Peers the best the home side could muster.

Despite not having as much of the ball, Southend were creating the clearer of the chances and after Murphy had missed a great opportunity to double Blues’ lead, Dalby put the finishing touches on a superb free-kick routine to put Southend 2-0 ahead.

After Ralph had been brought down on the left, Zak Brunt played a low ball into the path of Dalby who took one touch to set himself and create enough space to fire across the face of Tony Thompson and double the visitors’ advantage.

Altrincham’s first-half performance prompted boss Phil Parkinson to make a double change at the interval and the Robins piled the pressure on the Blues backline before going close when Connor Hampson’s shot flew across the face of goal and just wide.

The home side though were gifted a lifeline when referee Adam Herczeg pointed to the penalty spot just after the hour mark for a handball by Nathan Ferguson. Ryan Colclough stepped up to take it but Arnold made a superb save to his right to tip it round the post.

But Blues’ two-goal lead wouldn’t last much longer as Altrincham got one back just five minutes after missing from the spot as substitute Dan Mooney carried the ball forward, riding several challenges, before firing into the bottom corner to bring the home side back in it.

Having come from 2-0 down to grab a point away at Chesterfield in midweek, Altrincham were growing in confidence of repeating the trick again as they continued to flow forward and put pressure on Maher’s side.

Five minutes of added on time at the end of the game gave the home side hope of snatching a late point. The Robins had several set-piece opportunities to nick an equaliser but Southend stood strong and secured Maher’s first away win as Blues boss.

Tickets for Southend United’s fixture against Altrincham at Moss Lane are currently off sale to both home and away fans.

Altrincham are in discussions with their local council at present regarding their stadium capacity and are hopeful to provide Southend United with an update on Thursday.

Currently, over 250 Blues fans have purchased tickets for the 450-mile round trip - those who have already bought are not affected and can be assured they will be able to get in on Saturday.

Fans will be updated accordingly following discussions with Altrincham in relation to additional tickets which we hope will be available to purchase.

Southend United thank you for your patience on this matter and will provide an update when able to do so. 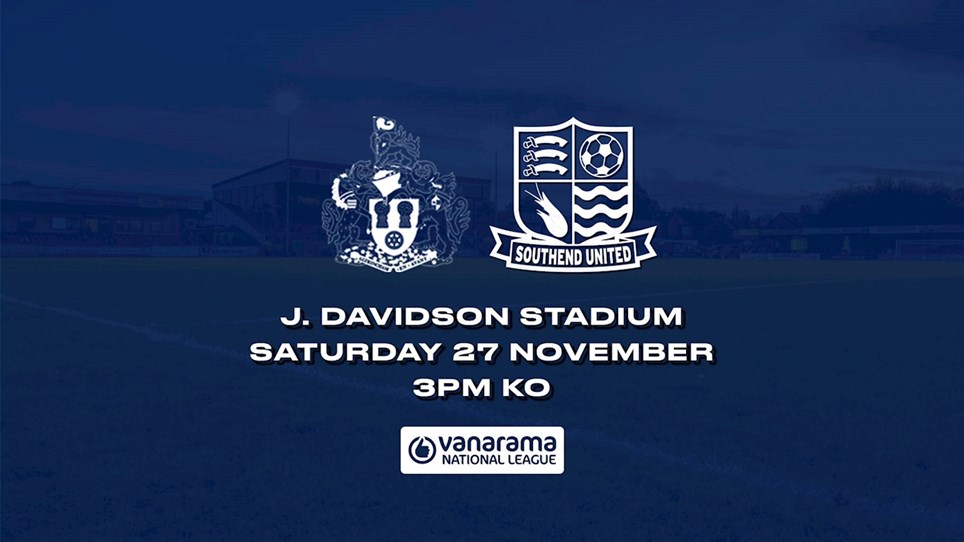