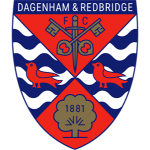 Southend United’s first ever FA Trophy campaign continues on Saturday, as Kevin Maher’s side make the short trip to face Dagenham & Redbridge in the fourth round.

Blues surpassed National League South outfit Dorking Wanderers with a 2-1 victory to reach this stage, while the Daggers narrowly edged past Southern League South Division side Truro City, their tie was taken all the way to a penalty shootout after a 1-1 draw.

And now Maher will lead his side out at the Chigwell Construction Stadium for the second time since his appointment as Blues’ Head Coach, aiming for a better result than the 3-0 league defeat in his dugout debut.

It’ll be the first time the sides have clashed since John Still’s appointment as Head of Football at Roots Hall, he is very well acquainted with many at Dagenham and was involved with the club as recently as this season.

The Daggers’ former boss achieved two promotions during his time at the club.

Blues last paid visit to Dagenham three months ago, and since, the Daggers have endured a mixed bag of results.

After their 3-0 victory against Maher’s side, Daryl McMahon’s outfit only tasted victory once in their following seven matches in all competitions, including five defeats.

But a strong show of character has turned their fortunes, seeing them produce a fine run of form, launching them back into the play-off picture, in sixth place and just four points from second.

The Daggers are the National League’s top scoring side, their attacking options ooze quality with the likes of Paul McCallum, Junior Morias, Angelo Balanta and Josh Walker all within their ranks.

And a familiar face for visiting Blues fans will be Myles Weston, who featured when the two sides clashed three months ago, contributing with an assist.

Blues have enjoyed an upturn in form and massively improved consistent performances.

In their last seven outings, Maher’s side have run out victors four times, drawing twice and losing just once.

Rectifying earlier struggles in front of goal, Blues have scored in each of their last seven matches.

But Saturday’s trophy tie will be a tough test for Southend, the Daggers winning five of their last six matches.

Two of their triumphs came against National League bottom side Dover Athletic, the two sides met twice within a week.

In their last six outings, McMahon’s side have bagged 13 goals.

"We’ve had a good start but there’s a long way to go with some big games coming up.

"Tuesday was good but it’s gone, we’re focusing on the next one now.

"The players have worked ever so hard in training and hopefully that’s what is starting to come out in games.

"It’s good to get points but you need consistency and we want to keep winning football matches.

"It’s a tough one for us and Darryl has a really good team there, it will be a good test for us and we will be better than the last time we went.

"We always look to win games and this is a cup competition with a Wembley final so we want to do well in it, it’s the next game so all our focus is on it.

"We don’t look too far ahead, and we want the same level of intensity."

Harrison Neal and Leon Davies will be unavailable for selection, having both already competed in the FA Trophy with their previous clubs.

Maher will make late calls on the fitness of Rhys Murphy and Will Atkinson, who were forced off the field with injury on Tuesday.

Jacob Miles will be the one calling the shots as Southend make the short trip to Dagenham.

He was the man in the middle when Blues travelled to Grimsby Town in November, as they suffered a narrow 1-0 defeat.

Elsewhere in the FA Trophy:

Blues fans unable to attend the Chigwell Construction Stadium will still be able to follow all the live action by subscribing to Blues TV where you’ll get live match commentary from the BBC Essex team from all first-team matches this season.

Southend United exit the Buildbase FA Trophy after a 2-0 defeat against Dagenham and Redbridge at the Chigwell Construction Stadium.

Second-half goals from Mo Sagaf and Junior Morais put pay to Blues’ hopes of a Wembley trip this season as the Daggers advanced to the round of 16 at Southend’s expense.

With local bragging rights at stake as well as a place in the final 16 of the competition, it was Blues that started the brighter of the two sides early on in East London, twice going close from set-pieces in the opening few minutes.

Both chances came from the combination of Jason Demetriou and Josh Coulson, first with the Southend skipper seeing his corner headed over the bar by Coulson. Two minutes later and Coulson’s header from a Demetriou free-kick had to be cleared off the line by Joey Jones.

The home side took their time to get a foothold in the contest, with a wild effort from Angelo Balanta and a tame header from Mauro Vilhete the best the Daggers could muster in the opening half an hour.

Meanwhile, Blues continued to look the more threatening with Matt Rush seeing a header blocked from close range before fizzing a low ball across the face of goal that was begging to be tapped in, in front of the 820 Southend fans behind the goal.

Daryl McMahon’s side though ended the half strongly and created a string of chances before the interval. Vilhete and Balanta both had efforts go off target, while Balanta again along with Junior Morais saw efforts well blocked by a dogged Southend defence.

Daggers goalkeeper Elliot Justham had to be at his best to keep Blues out early after the restart with the visitors forcing two smart saves out the Dagenham stopper. Matthew Dennis saw his effort tipped over the bar, with Coulson testing Justham with a near-post shot from the resulting corner.

In the previous league meeting between the sides in October, Daggers put Southend to the sword with three quick-fire goals after a goalless first-half, and it was a case of history almost repeating itself three months on with the home side this time scoring two quick goals to take control of the tie.

Former Blues midfielder Myles Weston teed up Mo Sagaf for the game’s opening goal, crossing from the right for Sagaf to head home from close range. Eight minutes later and Daggers’ advantage was strengthened as Junior Morias tapped in from close range at the second time of asking.

The two quick goals had knocked the stuffing out of Kevin Maher’s side who could have fallen further behind had Steve Arnold not kept out Vilhete’s near-post strike with 20 minutes remaining as Southend were unable to muster a riposte.

Dennis, Sam Dalby and Terrell Egbri all had efforts go off target as the visitors tried to engineer a barnstorming finish to the tie, but it was to no avail as Southend exited the FA Trophy at the fourth round stage leaving Dagenham to advance to the last 16.

Blues will visit Dagenham & Redbridge in the Fourth Round of the FA Trophy.

Blues fans will be situated in the SD Samuels Stand at the Chigwell Construction Stadium.

Tickets are due to go on sale from the Blues Box Office at the following prices:

*With valid student card
*When bought with a full-paying adult

Wheelchair tickets can be purchased by contacting the Dagenham & Redbridge Ticket Office on 020 8592 1549 ext 2.

Tickets will be on sale from midday on Tuesday 28th December.