Southend United are back in League Two action this weekend looking for their first points of the campaign as they entertain Derek Adams’ Morecambe tomorrow afternoon.

The travelling Shrimps have an impressive record against Blues so they’ll come to Roots Hall full of confidence despite a couple of recent heavy defeats in league and cup.

Mark Molesley’s side have picked up just one win in 11 previous meetings with Morecambe – a 3-0 FA Cup victory in 2013 – and he’ll be desperate to see his side get off the mark on Saturday.

Blues go into this weekend off the back of a 2-0 defeat to Carlisle United last Saturday, Southend’s fourth successive defeat in all competitions.

Prior to the reversal in Cumbria, Blues were on the wrong end of defeats to Harrogate in the league, West Ham’s u21s in the EFL Trophy and Gillingham in the Carabao Cup.

Morecambe make the journey south after two chastising defeats. The Shrimps lost 5-0 at home to Cambridge last weekend and in midweek were beaten 7-0 by Newcastle in the Carabao Cup.

It was heartbreak for Blues last time these two sides met as Morecambe beat Southend 3-1 to prevent Phil Brown's side from gaining automatic promotion to League One on the final day of the 14/15 season.

Jack Payne cancelled out Jack Redshaw’s early strike before goals from Aaron Wildig and Jamie Devitt condemned Southend to the play-offs, and we all remember how that turned out!

"We’ve had a good week’s training and we’re always looking to improve. We’re a work in progress and we’ve got to keep progressing, keep improving and that’s what we work hard every day to do.

"[Morecambe] had a good win on the opening day of the season but obviously lost the last couple. Sometimes a wounded animal is a dangerous animal so we will give them the respect they deserve.

Mark Molesley kept his cards close to his chest yesterday when discussing availability, saying “possibly” to the prospect of some returning faces this weekend.

Timothee Dieng (calf) and John White (hamstring) have both been absent as of late and will hope that they can prove their fitness in time to face Morecambe on Saturday.

New signing Simeon Akinola is unlikely to feature as he continues to build his fitness, while it’ll be the first return to Roots Hall for Alan McCormack who re-joined Blues last week.

Youngster Adam Phillips is certainly one to look out for tomorrow afternoon having already scored twice this season for Morecambe.

The 22-year-old midfielder is currently on loan from Burnley and is into his second loan spell with The Shrimps after scoring four times in just 11 appearances for them last season.

Phillips is comfortable either in a sitting role or an attacking role in central midfield, where he was deployed last season, and he will be a key threat for Morecambe tomorrow.

Following a late change, Charles Breakspear will come in to officiate tomorrow afternoon, being assisted by Matthew Lee and Geoffrey Russell, with Stephen Brown his fourth official.

Breakspear is partial to dishing out a few cards and last season he averaged just under five cards a game after issuing 140 yellow cards and 12 reds in just 32 matches.

This season has been no different with the Surrey-born ref showing 11 yellows and two reds in his four matches so far, his most recent of which was Stevenage’s 3-0 win over Oldham.

With fans still unable to attend matches in person, Blues fans can watch tomorrow’s clash with Morecambe by picking up a Match Pass for iFollow Blues for £10.

Southend fell to a 2-1 defeat against Morecambe at Roots Hall after Emile Acquah’s early opener was cancelled out by goals from Aaron Wildig and Adam Phillips.

Blues got off to the perfect start when Acquah nodded in from close range after Brandon Goodship had smacked the underside of the crossbar, leaving his strike partner to nod home the rebound from six yards out.

Mark Molesley’s side defended doggedly as Morecambe pressed for an equaliser but the visitors eventually made the breakthrough after a wicked ball into the box from Phillips was prodded home from close range by Wildig.

And the visitors would complete the turnaround with a little over 15 minutes remaining when Phillips was on the end of a Morecambe counter-attack, firing the ball in off the inside of the post to give the visitors the victory.

Despite it condemning Southend to a third successive defeat at the start of the League Two season, Molesley can take some comfort from the improved performance week-on-week, even though they have yet to garner the former Weymouth boss the points he and his side desire.

Looking to claim their first points of the season, Molesley made three changes from the side that lost last time out to Carlisle. Jason Demetriou came in to captain the side along with Emile Acquah and Bournemouth loanee Kyle Taylor.

Blues had a terrible record against this afternoon’s visitors, only winning one in 11 previous meetings against Morecambe, but they made the ideal start at a blustery Roots Hall as Emile Acquah nodded Southend in front after just five minutes.

Acquah was in the right place at the right time to head in from close range after Brandon Goodship had rattled the crossbar with a thunderous strike. The young striker though was on hand to nod in, under pressure from Liam Gibson, to put Molesley’s side in front.

Morecambe came into the game after conceding 12 goals in their last two matches and would have feared the worst after going behind so early, but they rallied and had a handful of good opportunities to level matters in Essex.

Carlos Mendes-Gomes headed one wide before Blues survived a couple of goalmouth scrambles to keep their lead intact. A couple of free-kicks then threatened with Adam Phillips hitting the wall with his before Mark Oxley needed to be alert to stop Aaron Wildig’s crossed effort creeping in.

Morecambe continued to apply the pressure after the break as Southend battled hard to preserve their lead but the visitors broke through 10 minutes into the second-half as Wildig put Morecambe back on level terms.

Phillips picked up the ball on the right and whipped a dangerous low ball in, across the face of the Southend back-line, finding the run of Wildig who had snuck in at the far post to place the ball into the bottom corner of Oxley’s net.

Southend would have been disappointed to lose their lead so soon after the restart and they were indebted to goalkeeper Oxley for ensuring Morecambe didn’t go in front shortly after as Blues’ number one got down well to save John O’Sullivan’s shot.

Blues quelled the Morecambe pressure as the half went on but they were caught out on the counter-attack after the visitors picked off a loose pass in midfield and ran through to score with Phillips scoring past Oxley.

O’Sullivan was set clear after Southend lost possession inside the centre circle. With Tom Clifford bearing down on him, O’Sullivan crossed towards Phillps and, despite the best efforts of Shaun Hobson and Oxley, the midfielder found the back of the net via the inside of the post.

Molesley sent Matt Rush into the fray late on as Southend pushed forward for an equaliser, and when six minutes of added on time were shown, Blues threw everything they could forward to pick up a first point of the season seeing a flurry of late efforts blocked.

But despite their best efforts, Southend were unable to get the breakthrough as they fell to a third defeat of the season. Morecambe meanwhile picked up their second win of the campaign to climb into the early play-off places. 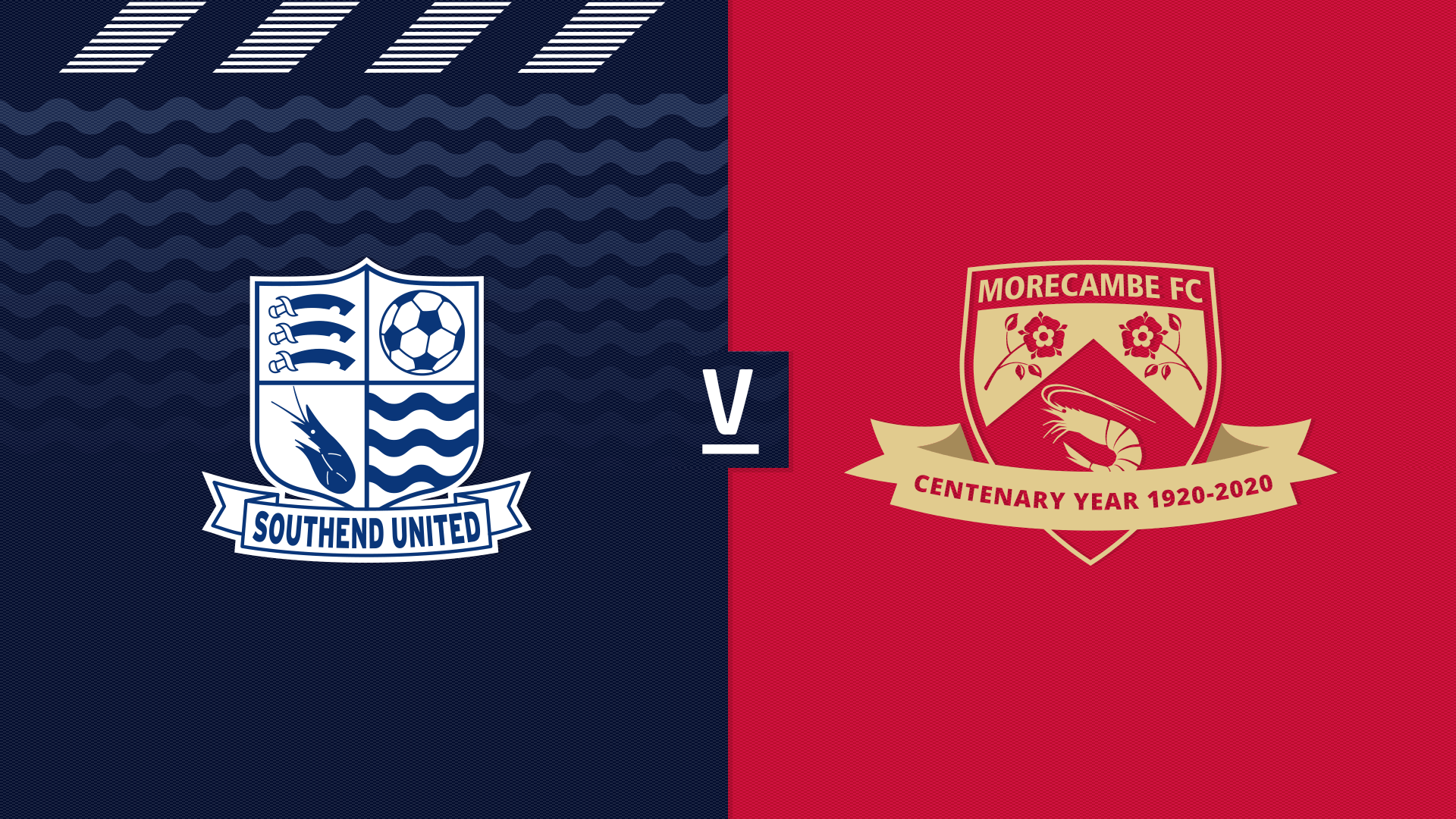 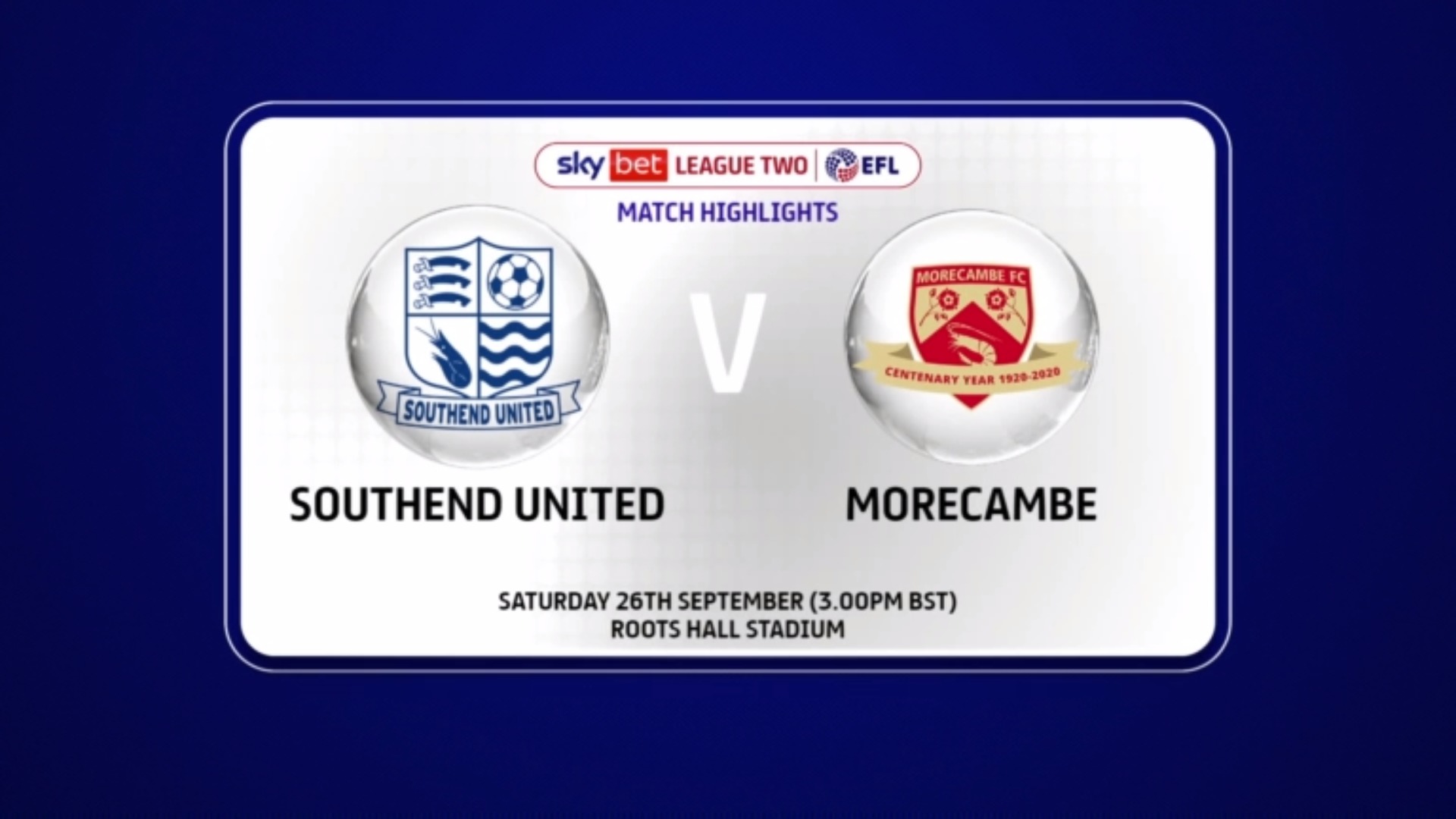 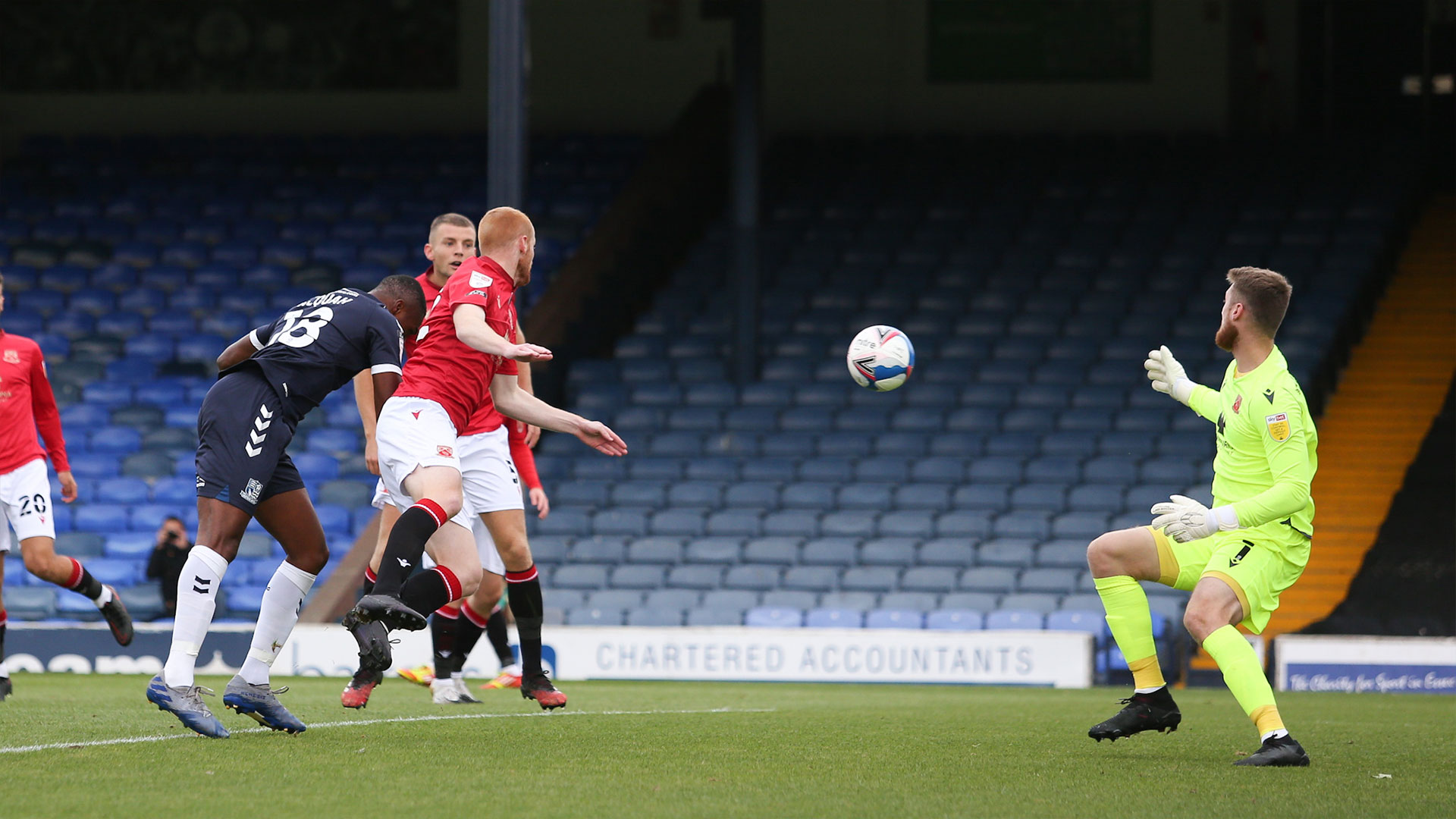