Southend United are on the road once again as they make the trip to the West Midlands tomorrow afternoon to take on Walsall at the Banks’s Stadium.

Mark Molesley’s side are in desperate need of a first league win and they’ll be going to what has been a pretty happy hunting ground in recent times for Blues.

Southend have lost just one of their last five visits to The Saddlers, a record which Blues fans will hope bodes well for a positive result on Saturday.

Safe to say that Southend’s recent form hasn’t been ideal with Blues yet to pick up a win in the league or any competition so far this campaign.

The midweek defeat to Colchester and last weekend’s penalty defeat to Boreham Wood only compounded a poor run of form for Southend who had lost their last six league games.

A much-changed side, equalling the average for the youngest starting 11 ever fielded by a Southend manager, was put out on Tuesday night so Molelsey will look to a positive second half response and extra time performance in the Emirates FA Cup last weekend, albeit not the right end result on penalties, as something to try and build on going into this weekend.

Walsall too lost their two cup games this week, but they’ve proven to be tough to beat in the league with just one defeat in 11 games, although of those 11, seven have been draws.

This was certainly a controversial last meeting between these two sides as Aramide Oteh’s hotly disputed penalty in stoppage-time cost Blues victory at the Banks’s Stadium.

Simon Cox appeared to have secured Blues their first win in months to alleviate relegation fears only for referee Ross Joyce to give the softest of penalties to the hosts, ensuring the points were shared.

“We always remain positive. It’s been a mixed week and our training numbers have been a little bit split and a little bit limited," said Molesley.

“Some were on extended recovery after extra time on Saturday and only took part in lighter training while another group was preparing for a game and vice versa from Tuesday.

“On the training field is where you hone everything and where teams are built, and in pre-season we were missing a lot of the key players who are starting to come back and be around the team now.

“Those building blocks are a little bit disrupted due to injuries and the lack of time, and since then we’ve been trying to catch our breath a little bit and the games have been coming thick and fast, Saturday, Tuesday.

“Coupled with the injuries it has made it challenging, but we need to roll with the punches and keep striving to improve.

“You control what you can control. We’re fully committed to getting this right.

“We’ve prepared the best we can and it never changes; try and be the best you can every day.”

Blues will be without Elvis Bwomono for the trip to Walsall as the right-back is away on international duty with Uganda, having won his first senior cap in yesterday’s 1-0 win over South Sudan.

John White, though, is in line for his first league start of the season after the centre-back came through 45 minutes against Colchester United in midweek.

Mark Molesley remains without Kyle Taylor as he continues to recover from a hamstring problem, while Alan McCormack also remains out but is expected to return to training next week.

Saddlers striker Caolan Lavery has found some good form in recent weeks having scored three in his last six appearances for Walsall.

The Northern Irishman bagged a brace against Barrow to earn Darrell Clarke’s side a draw on the road before scoring in a losing effort to Clarke’s former side, Bristol Rovers last Saturday.

Lavery had a brief spell at Southend early in his career, making four appearances while on loan from Sheffield Wednesday, and he’ll be looking to score against his former side tomorrow.

Craig Hicks will be the man in charge tomorrow afternoon, being assisted by Chris Isherwood and Ollie Williams, with Christopher Husband sitting in as the fourth official.

This will be Hicks’ first Southend game this campaign after taking charge of three Blues games last term in matches against Coventry, AFC Wimbledon and Burton Albion.

Hicks so far this season has refereed 12 matches, issuing 35 yellows and one red, with his last appearance being Dagenham & Redbridge’s Emirates FA Cup shock win over Grimsby last Saturday.

With fans still unable to attend matches in person, Blues fans can watch Saturday’s clash with Walsall by picking up a Match Pass for iFollow Blues for £10.

For more information on how you can get your Match Pass and ensure you miss none of the action at the Banks’s Stadium on iFollow Blues, click here.

Emile Acquah’s late winner earned Southend their first win of the season as they survived a missed Walsall penalty to beat the Saddlers 1-0 at the Banks’s Stadium.

The young striker scored with two minutes of normal time remaining to earn Blues a vital three points and a first win in all competitions for Mark Molesley after Elijah Adebayo had earlier missed from the penalty spot for the home side.

Walsall’s Alfie Bates was then sent off in added on time as Southend held on to spark jubilant scenes from the Blues players, as well as from Molesley and his backroom staff as they finally got the taste of victory.

The win was vindication for Molesley who’d apologised to the fans after a youthful Blues side lose 6-1 on Tuesday to Colchester in the Papa John’s Trophy, but, as promised, the Blues boss brought in all of those he rested for the trip to the West Midlands.

Jason Demetriou came in to make his 150th Southend appearance while John White started a league game for the first time and wore the captain’s armband. In their way were a Walsall side that had proven tough to crack having lost one of their 11 league games.

In a frantic opening 10 minutes of the game in blustery conditions, both sides had early chances to take the lead with Brandon Goodship getting on the end of a Mark Oxley goal kick to be through on goal, only for goalkeeper Liam Roberts to smother the opportunity.

The home side then broke forward and had a chance as Caolan Lavery got the wrong side of the Southend backline only for the combination of Oxley and Timothee Dieng to block the Northern Irishman’s shot.

Chances kept coming as Zak Jules glanced a Walsall corner wide before a poor touch from Oxley almost allowed Elijah Adebayo in to the score, but the Southend ‘keeper was able to get the ball away just in the nick of time.

Oxley then almost got on the scoresheet himself when the bounce on his long clearance almost deceived Roberts up the other end, but shortly after Oxley was needed in more conventional fashion to save Wes McDonald’s effort before producing an excellent save to stop Alfie Bates.

Things eventually quietened down, but Blues looked most likely to score before the interval with Dieng being defined by Roberts three times – first forcing a sharp double-save from the ‘keeper before seeing his header from a Demetriou free-kick pawed wide.

As the heavens opened in the second-half, Walsall had a couple of good chances as Bates fired just wide before McDonald too had a shot from distance go marginally off target as Southend dug deep to keep their hosts at bay.

Up the other end and Goodship forced another decent save out of Roberts when he cut inside and shot from the edge of the box, with Roberts needing to tip the strike away, while his opposite number Oxley needed to be at his very best to deny a Dan Scarr header from a set-piece.

Walsall though would get a huge chance to break the deadlock when they won a penalty after Tom Clifford brought down Cameron Norman. Adebayo stepped up to take the chance, but his penalty struck the crossbar and went over to spare Blues.

And Southend would make the most of their second chance by grabbing a late winner just two minutes from time as substitute Emile Acquah scored his second goal of the season to put Blues on the cusp of a first league win.

The striker received the ball on the edge of the area with his back to goal and fired a low shot, on the turn, which took the tiniest of deflections on its way through to the bottom corner of Roberts’ net as the youngster was mobbed by his teammates in sky blue.

Southend had four minutes of added-on time to negotiate and they were helped by a second yellow card for Bates after a foul on Kazaiah Sterling. Craig Hicks’ final whistle was music to the ears of Southend as the long wait for a win was over and richly deserved. 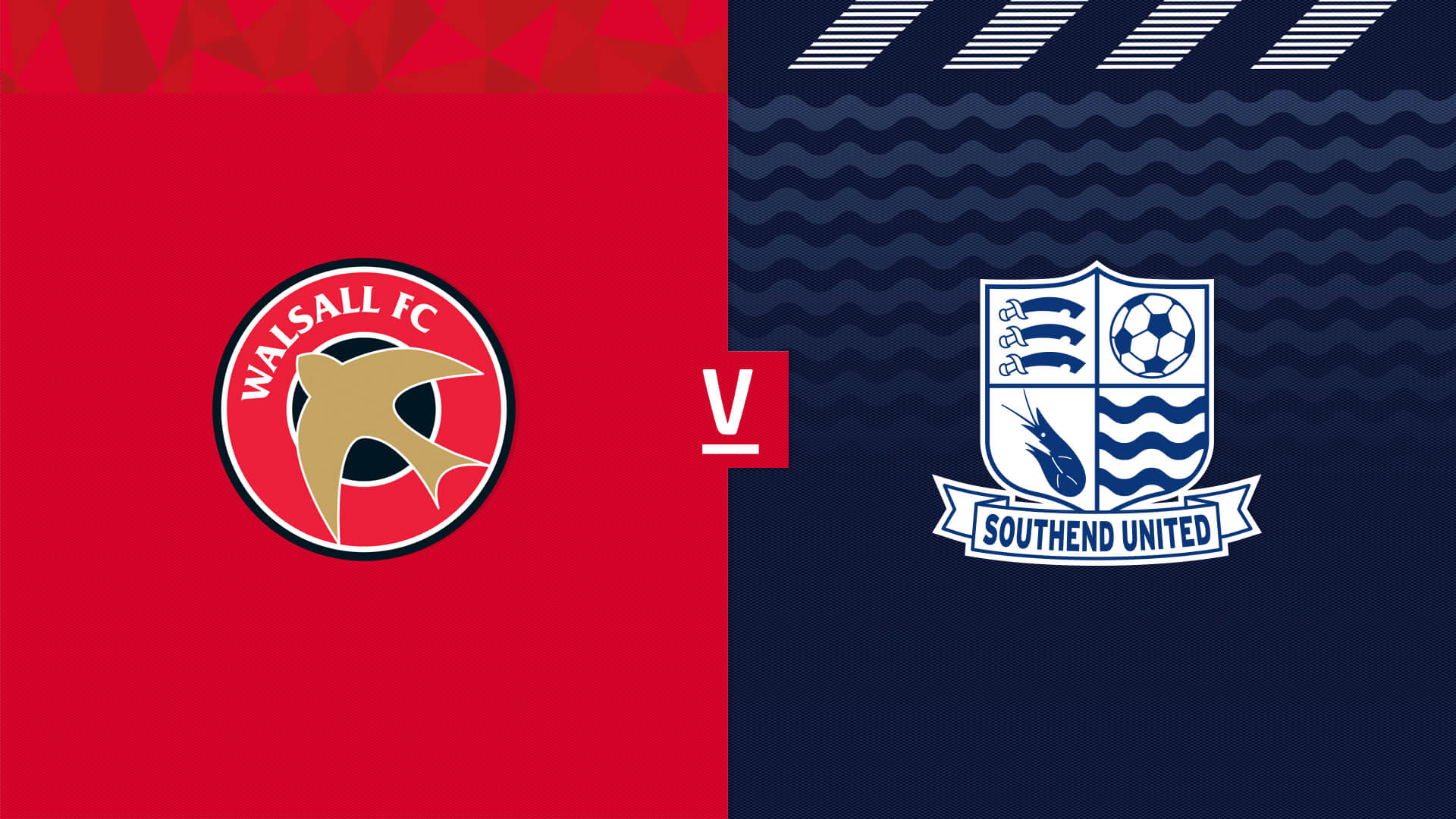 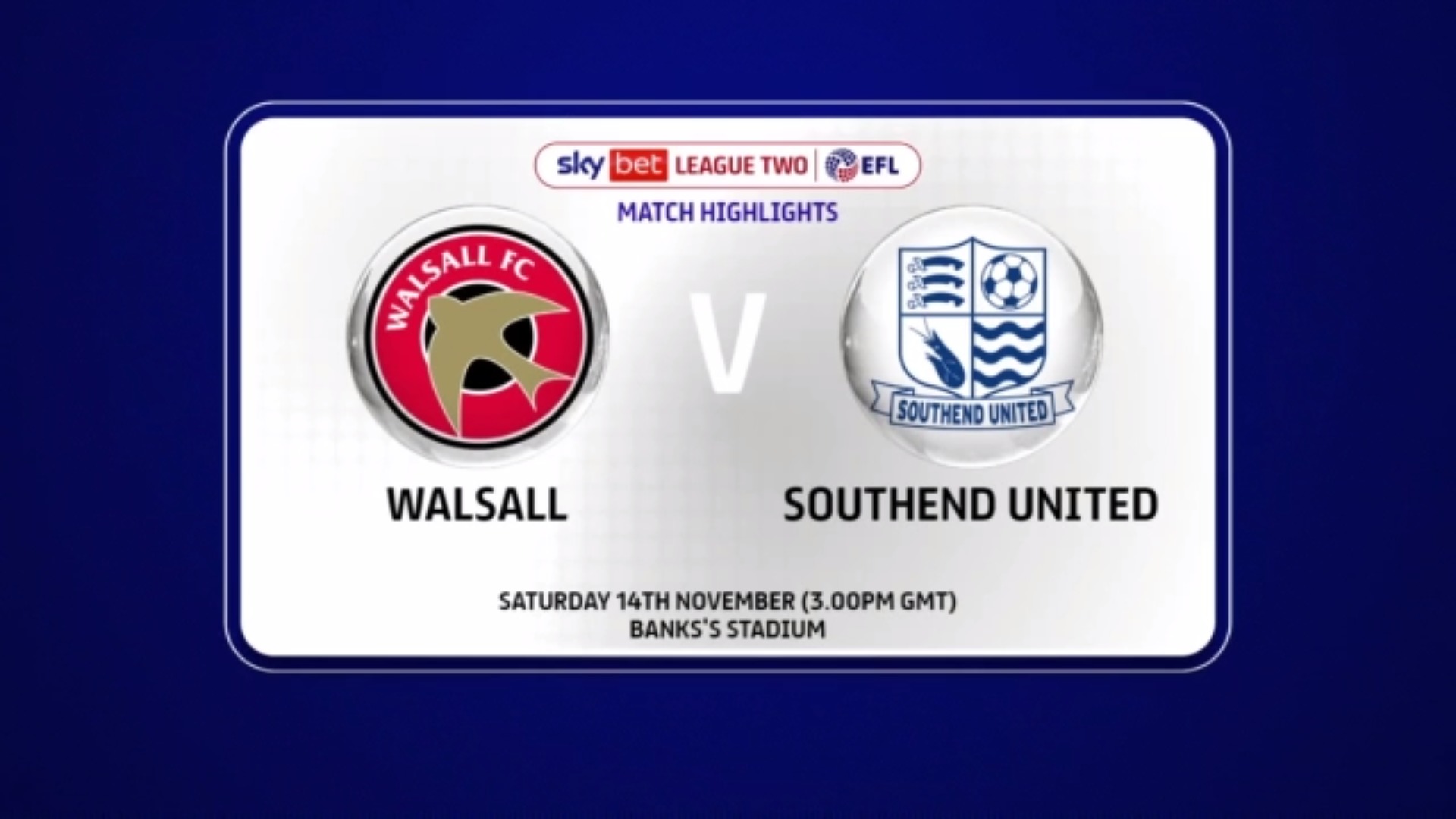 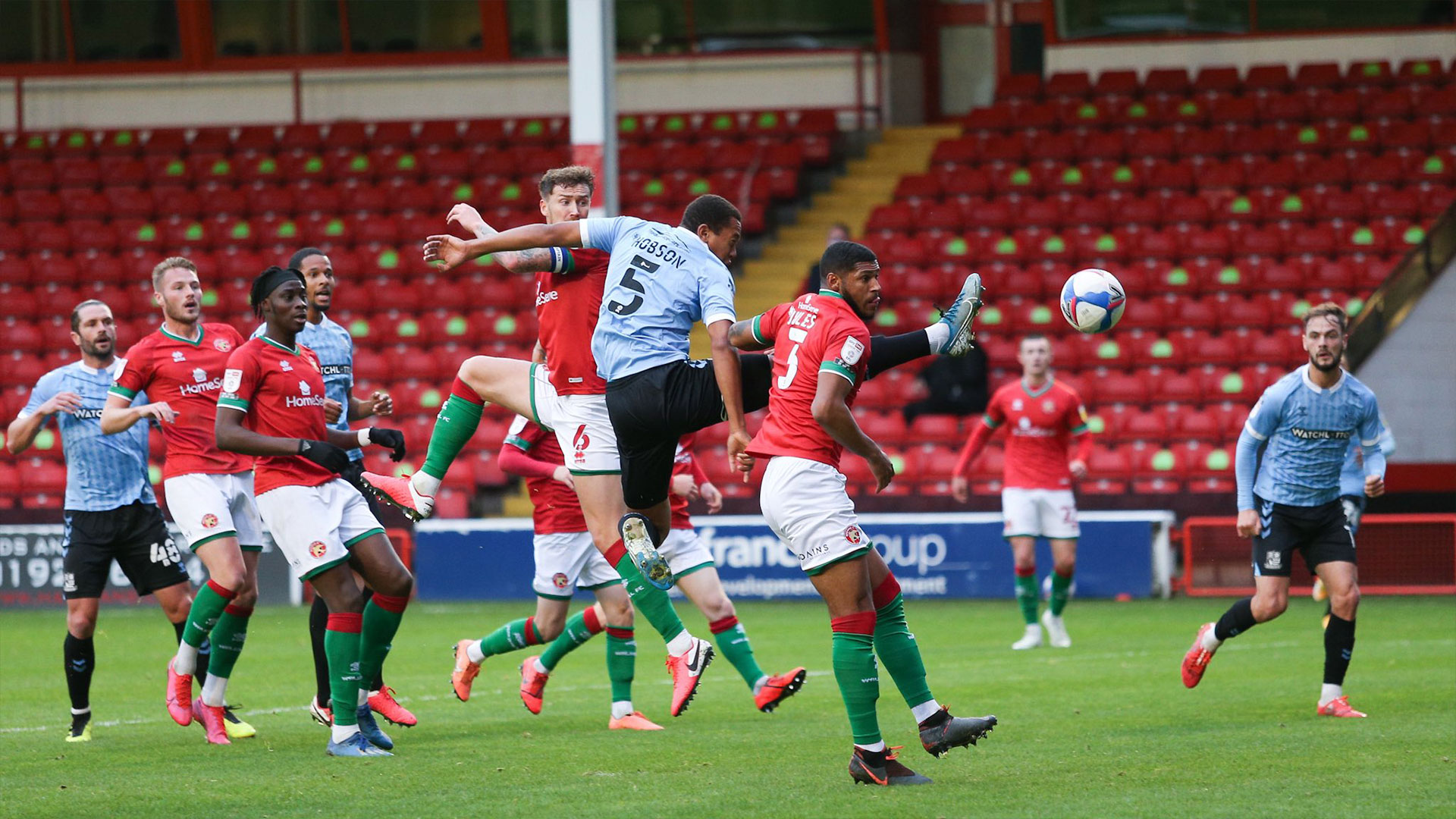