Southend United make their belated return to Roots Hall this evening as they entertain Mark Cooper’s Forest Green Rovers in a first-ever meeting between the two sides.

Rovers will become the third team this season to face Blues for the first time and Southend will hope it’ll be third time lucky after defeats to Salford and Harrogate in previous first-time meetings.

And after an impromptu weekend off due to a combination of COVID-19 and injuries, Mark Molesley’s side will be keen to get back to work in search of another first of the season, a home win.

Blues’ last outing against the Saddlers was Southend’s first maximum of the season and was just reward after a battling display up in the West Midlands in difficult conditions.

Victory at the Bank’s Stadium also ended Blues’ losing run which had seen them lose their previous six league games as well as suffer defeats in two cup competitions.

Forest Green are currently on a sticky run of form with no wins in their last four in all competitions, having won six of their eight games prior to this most recent run.

"It’s going to be a tough challenge. I’ve got the utmost respect for Forest Green.

"They play a lovely brand of football. A very good side in possession so we’ve got to be at our very best, as we have to every week.

"There’s some big challenges but we should be in a confident mood after we showed a good performance and got a win and clean sheet in our last game. There’s something to build on for ourselves."

Mark Molesley will have some juggling to do to his matchday squad this evening with a number of players still missing.

Harry Lennon is set to be out for several months as he undergoes surgery on a knee injury as well as a known calf injury which the battling centre-back had been playing through the pain barrier with.

His absence opens the door for Elvis Bwomono to slot back into the side after Shaun Hobson expertly deputised at right-back while Bwomono was on international duty with Uganda.

Blues continue to be without three players due to positive Covid-19 tests and having to self-isolate, however Kenny Coker will be available again having recovered from the the virus which he went down with two weeks ago.

James Olayinka faces a late fitness test, while Harry Kyprianou will come back in after his loan at Bromley ended at the weekend.

Nicky Cadden looks like the player to watch this evening with the Scotsman coming into the game off the back of scoring his first goal in English football at the weekend.

The 24-year-old is one of the newer faces at Forest Green after joining in the summer from Scottish Championship side Greenock Morton where he scored 10 goals in 30 appearances last season.

Cadden plies his trade on the wing where his pace and power are troublesome for defenders, and he’s also a dab hand at free-kicks, as proven by his superb late strike against Barrow on Saturday.

Keith Stroud will be taking charge of proceedings this evening in Essex, being assisted by Sam Lewis and Mark Jones, with Garreth Rhodes filling in as the fourth official.

Stroud reached double figures for appearances this season at the weekend, and during his 10 games so far this campaign, he’s issued a total of 21 yellow cards and just the one red.

It’ll be the first appearance for Stroud at Roots Hall since New Years Day 2019 when he oversaw Blues’ 2-0 win against Gillingham, which was sealed by a late Taylor Moore tap-in.

With fans still unable to attend matches in person, Blues fans can watch tonight’s clash with Forest Green Rovers by picking up a Match Pass for iFollow Blues for £10.

For more information on how to purchase your Match Pass if you are a non-season ticket holder, as well as other useful information such as technical support for iFollow, click here.

Blues fell to a narrow 1-0 defeat against Forest Green Rovers with substitute Jake Young’s goal the difference between the two sides despite a valiant performance from Southend at Roots Hall.

After an even first-half, highlighted by a glorious chance for Blues striker Matt Rush, two Rovers substitutes combined to break the deadlock in the 63rd minute when Young was picked out by Aaron Collins to fire home from 10-yards out.

The visitors had further chances to extend their lead with Jamille Matt hitting the post before Nicky Cadden’s rebound was cleared off the line, as a depleted Southend more than matched their opponents but were unable to find an equaliser that their endeavour had deserved.

After Southend were unable to field a side on Saturday due to a COVID outbreak in the squad on top of Blues’ lengthy injury-list, Mark Molesley was able to muster a patched-up side for the visit of Forest Green Rovers in a first-ever meeting between the two sides.

But even before a ball had been kicked, Southend were dealt another injury blow as Tom Clifford pulled up in the warm-up, meaning Harry Kyprianou had to be drafted into the starting 11 having originally been named on the bench.

Forest Green travelled to Essex off the back of a mammoth trip to Barrow, earning a late point in a 2-2 draw, and they had a good chance early on when Ebou Adams was slid through only for Mark Oxley to get a strong arm to the ball at the feet of the midfielder.

Southend had a couple of half-chances of their own when Matt Rush stole the ball in a dangerous area and didn’t quite see the run of James Olayinka before being shepherd out. Olayinka then won Blues a free-kick 20-yards from goal which Brandon Goodship struck against the wall.

And in a first-half short of chances for either side, Blues arguably should have taken the lead before the break as Elvis Bwomono carried the ball forward and teed it up for Rush who was unmarked 12 yards from goal, but the youngster fired wide.

The miss was a huge let-off for the visitors who went close to punishing Southend with a chance of their own after Nicky Cadden burst down the left. His cross found the head of the imposing Jamille Matt who glanced his header over.

Southend had an early opportunity in the second-half when Olayinka broke free down the left and managed to get a low cross into the box. Goodship was charging in to tap the ball home but Jordan Moore-Taylor beat the striker to it to get it clear.

Kyprianou then found space on the left and whipped a vicious cross which Luke McGee got down to before Rovers hacked it clear, and with Kyprianou out of position Odin Bailey broke and only a last-ditch deflection from John White diverted his shot over the bar.

Some more dogged defending from Southend prevented Dan Sweeney from scoring just before the hour mark as Timothee Dieng put his body on the line to block Sweeney’s shot. From the subsequent corner, Carl Winchester hit a half volley into the turf which bounced just over the crossbar.

Forest Green made two changes by bringing on Aaron Collins and Jake Young and they had an immediate impact as the two combined to open the scoring. Collins deceived Jason Demetriou on the byline before picking out Young who slotted it home.

Southend now had to come from behind but they almost fell further behind when Matt headed a cross from the right against the post before Cadden smacked the rebound towards goal only for White to make a vital block.

As time run down though the pressure on the Forest Green goal began to grow and in the seventh minute of stoppage time Dieng had a great chance to earn a point as he was found unmarked at the far post but his shot was deflected clear as Rovers held on. 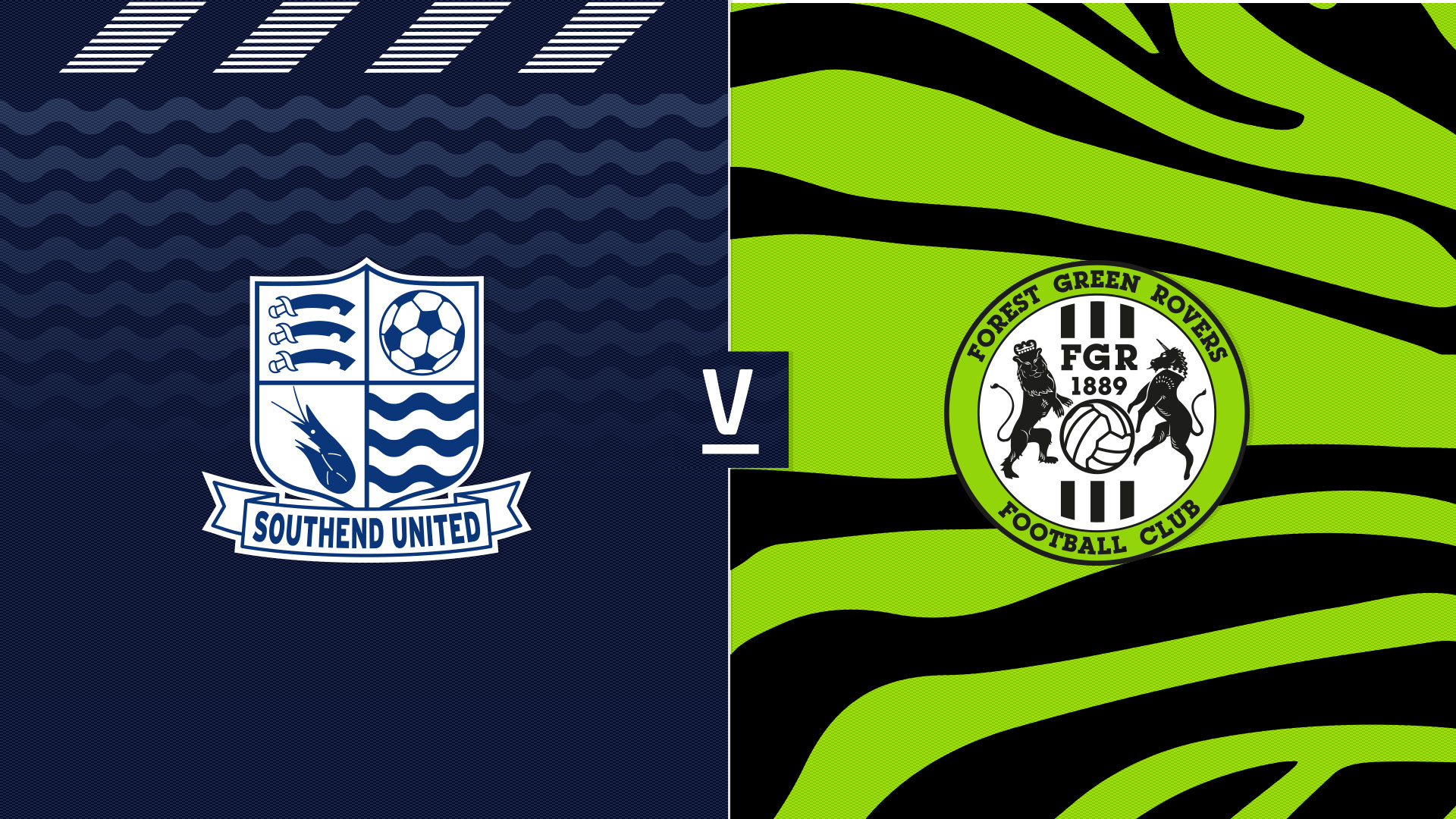 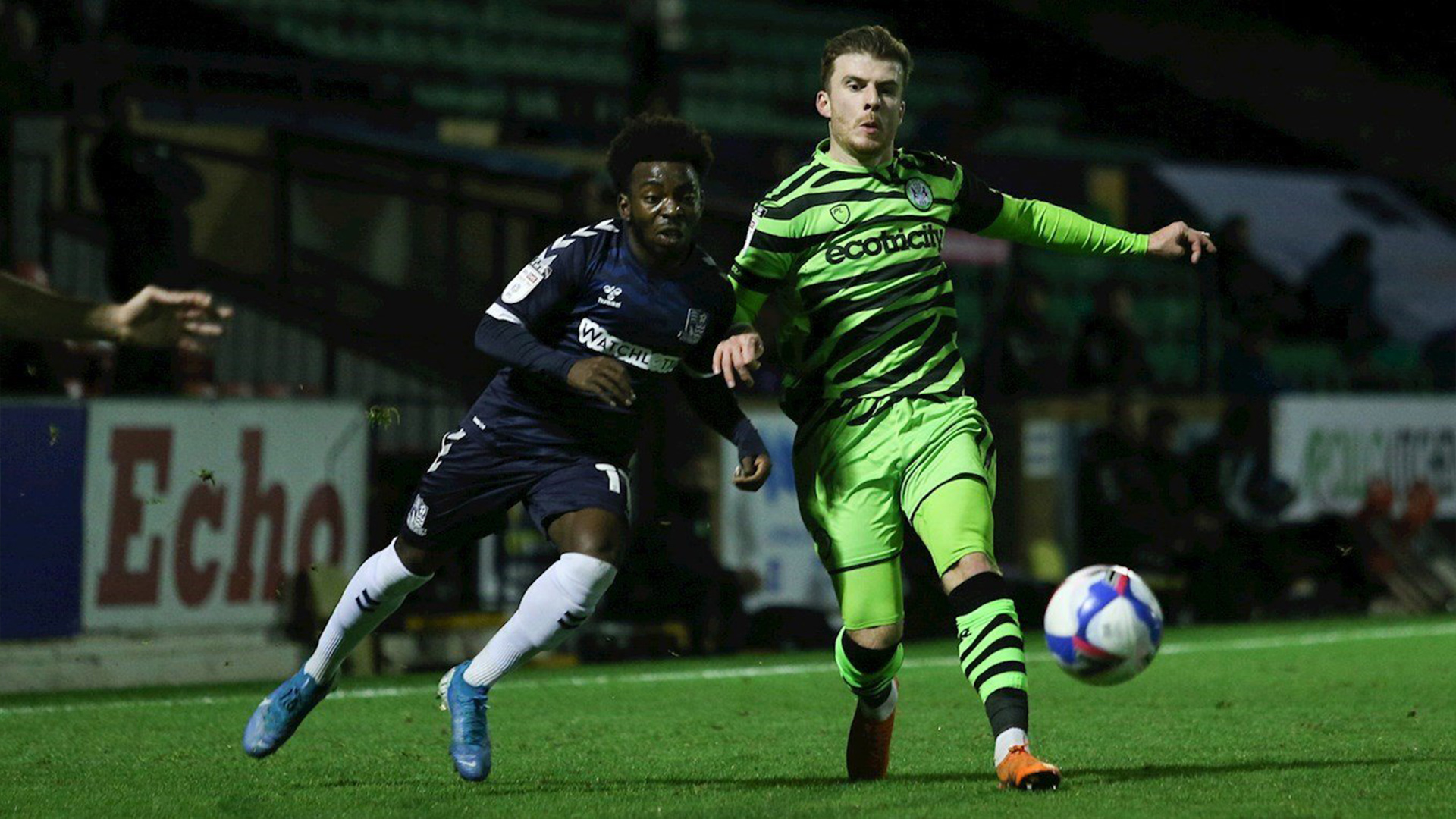 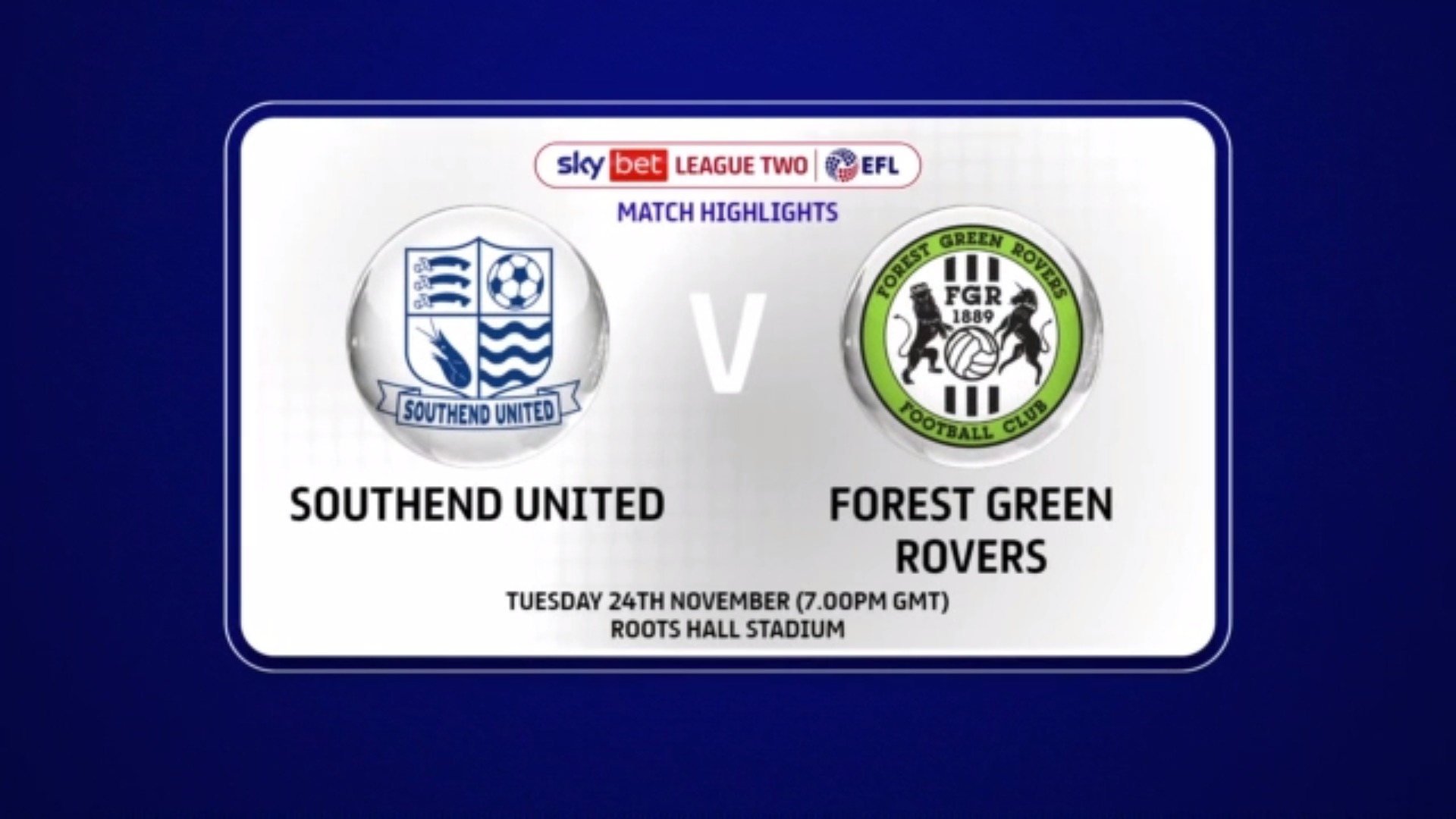