Southend United entertain high-flying Cambridge United this evening at Roots Hall in the first of three successive home games for Mark Molesley’s side in the next eight days.

Tonight’s fixture is a rearranged game from mid-November after Blues were unable to field a side due to positive COVID cases compounding Southend’s long injury list.

Since then, Molesley’s Blues have found some form but they’ll face a tough examination under the lights in Essex against a U’s side who sit just one point from the top of the League Two table.

Blues come into tonight off the back of a 0-0 draw away at Grimsby Town on Saturday, Southend’s third clean sheet in their last four matches.

Mark Molesley’s side have picked up three wins and two draws from their last six matches, with a 2-0 defeat to Leyton Orient the only blot on their recent record.

Cambridge too have picked up three wins from their last six and are unbeaten in their last three thanks to wins against Grimsby and Harrogate before drawing against Colchester on Saturday.

Blues started their Checkatrade Trophy group campaign off with a resounding 3-1 win against Cambridge United the last time these two sides met back in 2018.

Reggie Lambe headed the visitors in front just after the interval before two goals in nine minutes from Shawn McCoulsky and a memorable debut goal for Isaac Hutchinson gave Blues the win.

“It’s a really tough game coming up, and Cambridge started off really well this season, they’ve got some great players and find themselves competing for that top spot at the moment.

“We’ve got our work cut out but at the same time our groups on an upward spiral, and we’re growing all the time.

“We just had a challenging away trip against Grimsby on Saturday with tough conditions, but Cambridge had very similar if not identical conditions against Colchester with the pitch so they will be feeling the effects from that, but games like tonight are always going to come down to who can physically prepare the best and prove that on the pitch.”

The gaffer also touched on James Olayinka's injury from Grimsby:

“We’ve unfortunatley lost James to injury again, we’re currently waiting for a scan result to come back to see the full extent of that tackle from Saturday, but until then we don't know.

“Other than that we just have a few bumps and bruises that have appeared after a tough battle but the games are coming thick and fast and it’s all part of being a League Two player.

“Long away journeys, difficult playing surfaces it’s all part of the experience in this division but we can’t use those as excuses, instead we have to embrace those challenges.”

Mark Molesley was cautious with his substitutions on Saturday, only bringing on one sub in the 0-0 draw against Grimsby meaning he should have plenty of fit options to choose from tonight.

Kyle Taylor and Tom Clifford both returned from illness and injury respectively to be unnamed subs at the weekend and they’ll both be pushing for a start this evening.

Greg Halford, fresh off signing a new deal until the end of the season, is back and available again for selection having served his one-match ban for his sending off against Barrow.

Striker Paul Mullin is undoubtedly going to be Cambridge’s biggest threat in front of goal with the 26-year-old currently leading the League Two scoring charts.

Mullin has 18 goals in 23 league games and 20 overall in all competitions, including hat-tricks against Morecambe and Port Vale, and braces against Newport, Scunthorpe and Colchester.

It took just 10 games this term for Mullin to surpass his career-best goal tally for a season and he’s showing no signs of slowing down, so Blues will need to be at the top of their game tonight.

Robert Madley will take charge of proceedings at Roots Hall, being assisted by Daniel Cook and Stephen Brown, while Ryan Whitaker will fill in as the fourth official.

This season is Madley’s first back in football after a two-year hiatus and so far this season he’s officiated 14 matches, showing 43 yellow cards and just the one red.

The West Yorkshire official was last at Roots Hall in February 2017 when goals from Marc-Antoine Fortune, Simon Cox and Ryan Leonard earnt Southend a 3-1 win against Scunthorpe.

With fans not able to attend Roots Hall in person, Blues supporters can watch tonight’s clash with Cambridge by picking up a Match Pass on iFollow Blues for £10.

Southend’s winning run at home came to an end as Cambridge United came from behind to beat Blues 2-1 at Roots Hall.

The home side had much the better of the first-half and deservedly took the lead when Simeon Akinola headed in from a Sam Hart corner midway through the half.

But Jack Iredale levelled things up straight after the restart with a well-taken effort off the underside of the crossbar, before Joe Ironside tapped in from close range to secure the win for the visitors.

Defeat for Blues leaves them bottom of the League Two table ahead of two more home games against Mansfield and Bradford, while Mark Bonner’s Cambridge climbed to the top of the table.

Blues went into tonight knowing that a win would’ve seen them climb out of the relegation zone and with that prize in the mind, Mark Molesley made three changes to the side that drew 0-0 at Grimsby with Alan McCormack, Emile Acquah and Greg Halford coming in.

The visitors Cambridge though knew that a win for them could see them climb to the top of the League Two table, but it was Southend who were by far the most threatening side in the opening 45 minutes at Roots Hall.

Simeon Akinola chanced his arm in the opening minute but fired high and wide before having an unexpected chance 10 minutes later when he looked to be miles offside. The linesman’s flag stayed down only for Dimitar Mitov to pull off a smart save one-on-one.

The windy conditions were making life difficult for Mitov who was almost caught out by a Sam Hart corner kick which caught in the wind and came crashing off the post before Mitov made a brilliant reaction save minutes later to prevent Timothee Dieng from heading in from close range.

Southend would break through the Cambridge defences in the 27th minute as Akinola scored his second goal for Blues by nodding in Hart’s corner. Mitov came off his line but couldn’t get to the ball before the Blues striker who nodded into the empty net.

The home side were well worth their lead but Cambridge did have a great chance to level things before the interval when Paul Mullin’s free-kick was fumbled by Mark Oxley, only for Paul Digby to fail to convert on the rebound as Southend went into the break one goal to the good.

That lead though wouldn’t last long after the restart as Cambridge equalised inside the first minute of the second-half through Jack Iredale. The U’s defender chested down Harrison Dunk’s cross-field pass before rattling it in on the half-volley, kissing the underside of the crossbar on the way through.

Conceding so quickly after the restart would have been a hammer blow to Blues but they had a chance to immediately restore their lead when the ball ricocheted through to Acquah but the recovering Dunk done well to get back and block the striker’s shot.

It would be a chance that Southend would rue missing as Cambridge completed the turnaround midway through the second-half when Mullin got down the Blues left, smashing the ball across the face of goal for the grateful Joe Ironside to tap home from close range.

Southend needed a big response, and they were the width of the post away from parity when Akinola saw his effort from the edge of the area hit the outside of the post as goalkeeper Mitov stood motionless.

The home side were buoyed by the sign of seven added minutes at the end of the half to try and snatch an equaliser but they were unable to find a way through with two more huge home clashes to come this week against Mansfield and Bradford. 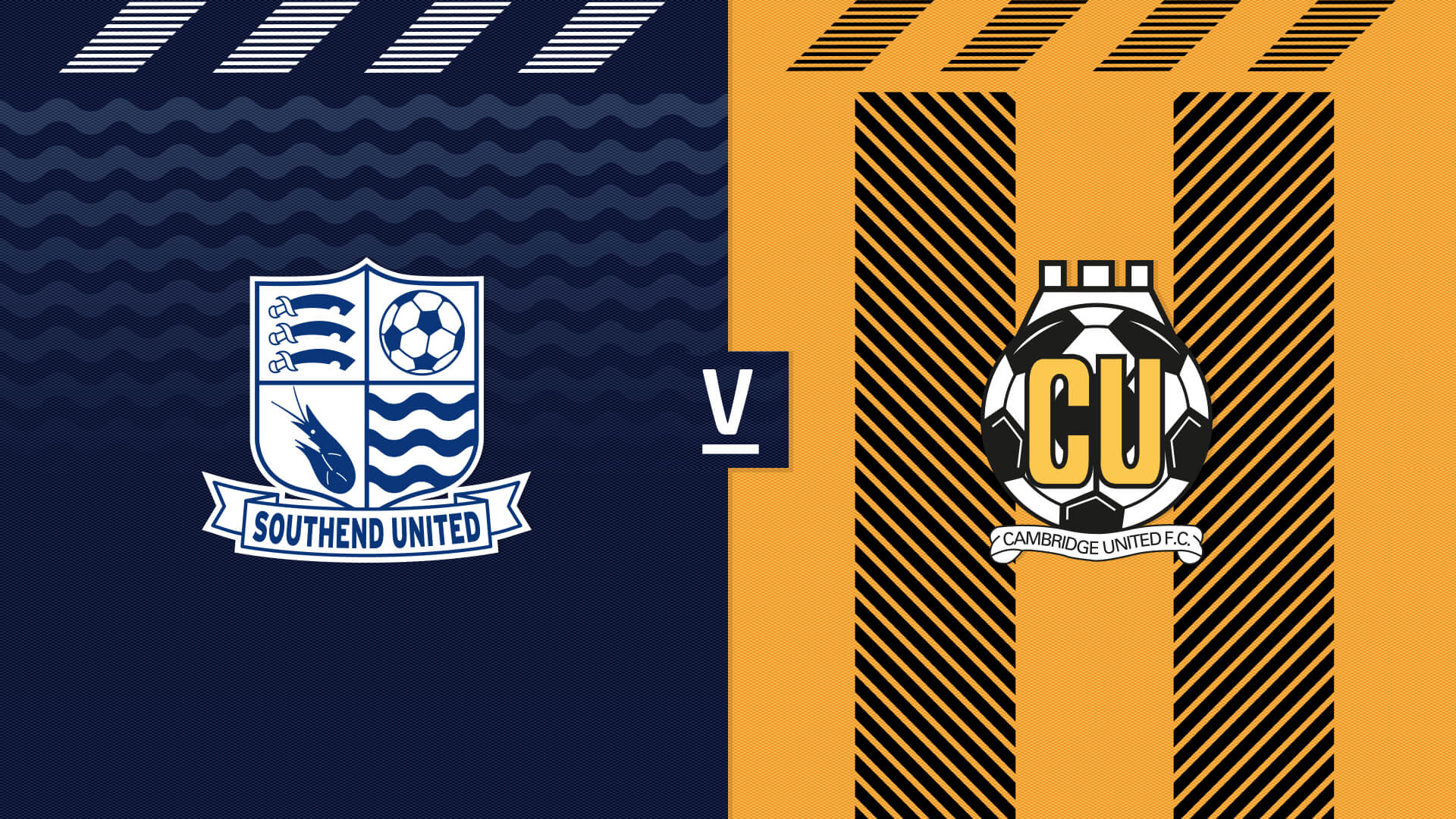 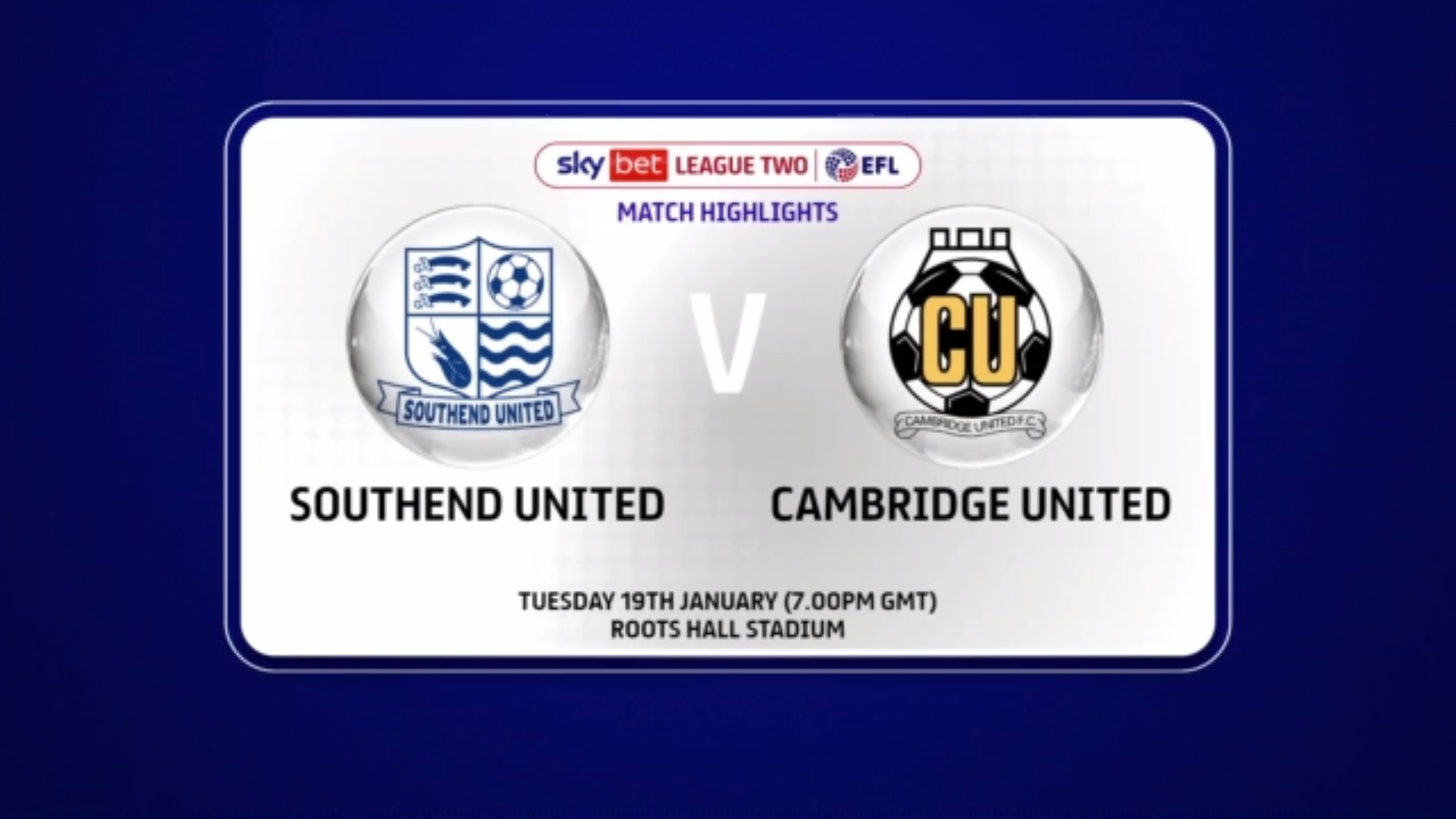 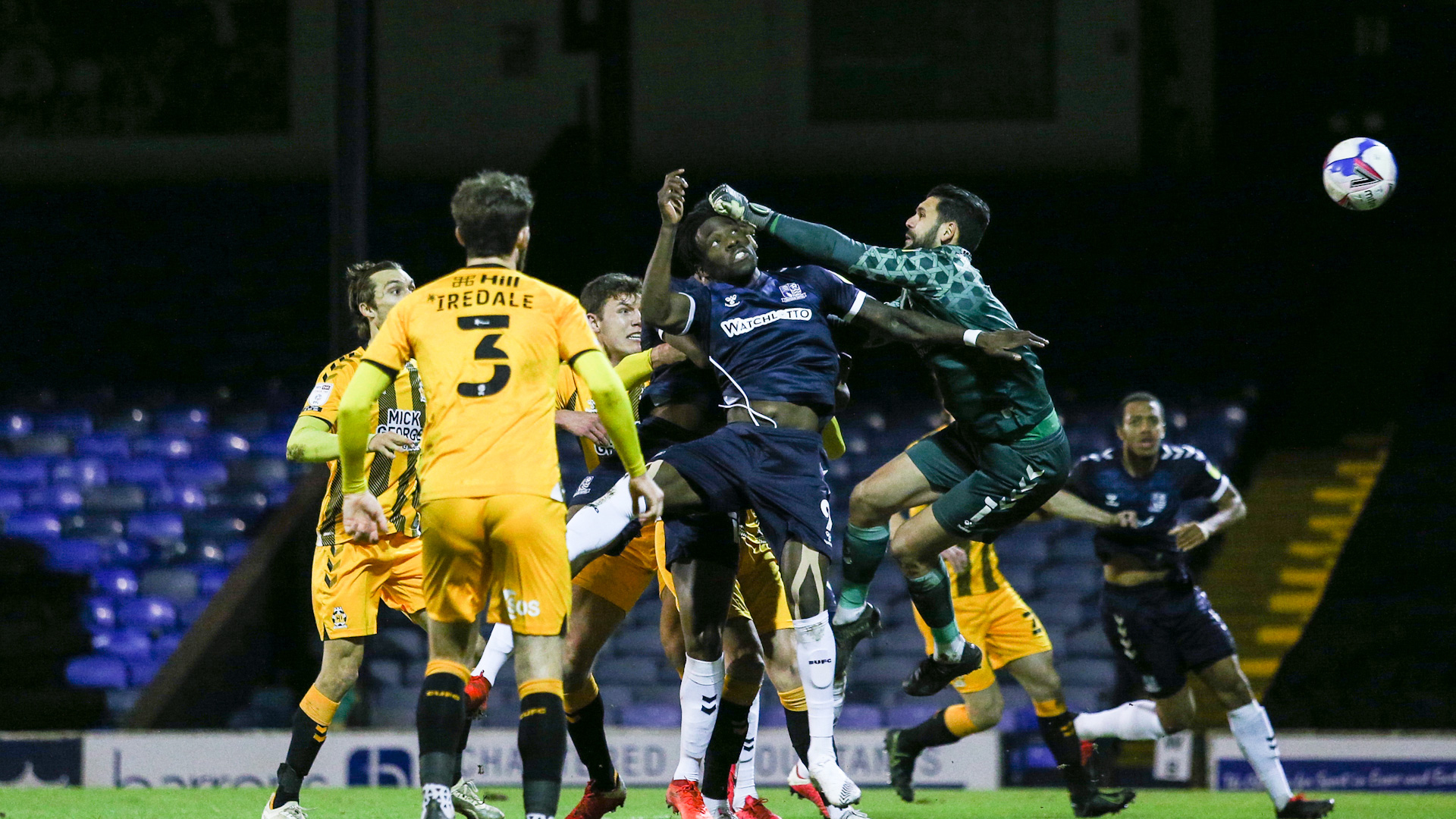