Southend United are back in action once again as they welcome Bradford City to Roots Hall this evening looking to end their recent run of home matches with a victory.

The Bantams though will provide another stern test for Mark Molesley’s side with the visitors boasting an impressive defensive record of late, conceding just twice in their last six games.

And with tonight being yet another opportunity for Blues to climb out of the relegation zone with a win, Molesley and his Blues will be hoping it’ll be third time lucky under the lights in Essex.

Saturday’s narrow 1-0 defeat to Mansfield was Blues’ second in succession and came off the back of a 2-1 defeat against table-topping Cambridge United last Tuesday.

Those two results combined with a 0-0 draw at Grimsby means Southend are without a win in their last three, with Blues picking up two wins and a draw from their last six outings.

Tonight’s visitors, however, are unbeaten in their last six thanks to three wins and three draws, though their last two fixtures have ended in 0-0 stalemates against Port Vale and Cambridge.

A first-half blitz from the Bantams secured a comfortable 3-0 win against Southend the last time these two sides met back in November at the Utilita Energy Stadium.

Callum Cooke fired Bradford in front in the fifth minute before Elliot Watt drilled in a second. Harry Pritchard then nodded in the Bantams third to wrap up the victory in Yorkshire.

"They are in a great run of form just as Mansfield were so it’s another big challenge but one we’ve got to make sure we dust ourselves off from Saturday and get back up on the horse as quickly as possible.

"The game can’t come quick enough from that point of view. Fine lines in football, we’ve been the other side of that slightly in the last two games and we’ve got to make sure we push on, react quickly and get that win.

"We’ve got to patch ourselves up. Very rarely are you at your strongest in football and it certainly hasn’t happened so far for us, but it’s what you do when you’re missing a few players which shows your character and resolve."

Tyler Cordner’s signing on loan from Bournemouth boosts Blues’ defensive options with the 22-year-old available if deemed ready and called upon by Mark Molesley.

Late decisions will need to be made on both Elvis Bwomono and Greg Halford after both limped off on Saturday against Mansfield with back and shoulder problems, respectively.

Alan McCormack was another that had to be withdrawn against the Stags at the weekend with a calf problem which is expected to keep the experienced midfielder out for a few weeks.

Brandon Goodship and Terrell Egbri are closer to returning but not in time to be in the squad against the Bantams.

Jason Demetriou missed Saturday's game against Mansfield but is expected to return after a small injection in his knee.

Timothee Dieng serves a one-match suspension for his sending off on Saturday.

Bradford’s most recent recruit, Danny Rowe is certainly one that Blues players and fans alike need to keep a close eye on this evening after the striker signed from Oldham last week.

The Bantams beat off several other clubs to secure the frontman’s signature and Rowe joins with quite a reputation for his goalscoring exploits, especially during his time at AFC Fylde.

The 30-year-old scored 189 times in 290 appearances for the National League side and has some spectacular goals to his name, so he’s one Blues can’t afford to give any time and space to tonight.

Trevor Kettle will be the man in the middle this evening, being assisted by Damith Bandara and Conor Farrell while Gareth Viccars fills in as the fourth official.

Kettle took charge of Blues three times last season, with his last Southend game being a 1-0 defeat at home to Gillingham last February.

This season, Kettle has officiated 18 games in which he has shown 50 yellow cards and no reds, with the Rutland referee last seen in Portsmouth’s 4-0 win against AFC Wimbledon at Fratton Park.

With fans not able to attend Roots Hall in person, Blues supporters can watch tonight’s game with Bradford by picking up a Match Pass on iFollow Blues for £10.

Blues fell to a third straight defeat in League Two as a brace from Gareth Evans and a first Bradford goal for striker Danny Rowe condemned Southend to a 3-1 defeat at Roots Hall.

After a period of pressure from the away side, Evans fired the visitors in front midway through the first-half after Callum Cooke had forced a smart save out of Mark Oxley giving Evans the opportunity to fire in the rebound into an empty net.

Elvis Bwomono’s first goal since scoring the winner against Lincoln close to a year ago brought Southend level but Rowe would slide Bradford back in front just shy of the hour mark before Evans’ second of the evening wrapped up the points for the Bantams.

Defeat for Southend leaves them rooted to the bottom of the League Two table, while Bradford remain unbeaten under the interim management pairing of Mark Trueman and Conor Sellars as the visitors climb to 18th.

Tonight was Blues’ third home game in the space of a week, but having not picked up a point from their previous two matches, this evening’s visit of Bradford was of huge significance for Mark Molesley’s side in their battle against the drop.

The Southend boss made three changes from the side that lost 1-0 to Mansfield at the weekend with Ashley Nathaniel-George and Jason Demetriou coming into the line-up as well as new-signing Tyler Cordner who’d come in on loan for the rest of the season from Bournemouth.

Blues had an early shout for a penalty waved off in just the ninth minute by referee Trevor Kettle when Simeon Akinola broke into the box before going down under pressure from Anthony O’Connor, but the ref was unmoved by the appeals.

Bradford came into the game unbeaten in their six games so far under interim managers Mark Trueman and Conor Sellars and they had a flurry of chances midway through the first 45 minutes which eventually lead to the Bantams taking the lead.

After Mark Oxley saved efforts from Levi Sutton and Danny Rowe, and Finn Cousin-Dawson’s header was deflected over, Callum Cooke broke through and forced another save out of Oxley only for Evans to be on hand to fire the rebound to put the Yorkshire side in front.

Blues though weren’t behind for long as Southend equalised through an unlikely source. After Reeco Hackett-Fairchild won a 50-50, Elvis Bwomono beat Connor Wood to the bouncing ball before firing across Sam Hornby and in off the inside of the post.

You’d have got good odds on the Southend right-back scoring and he should have scored again before the break when Hackett-Fairchild’s fizzed ball in was tipped out by Hornby. Bwomono picked up the loose ball but after setting himself he failed to find the target.

After the interval, Bradford’s newest recruit Rowe was making it his own personal mission to put the Bantams back in front, firstly seeing an effort from outside the box tipped onto the crossbar by Oxley before firing a first-time effort from 35-yards that needed tipping wide.

Rowe would eventually grab his first goal for his new club when Blues were caught out on the counter-attack. A two-on-one situation occurred when Cooke broke through before calmly playing in Rowe who slid it under the advancing Oxley to put the visitors back in front.

Southend needed to respond again and had a great chance go begging when Sam Hart’s cross found its way to Hackett-Fairchild in the box. The midfielder chested the ball down and fired in a vicious half-volley but was unable to keep his shot down.

And Blues would be made to pay for missing that opportunity as Bradford extended their lead with a quarter of an hour remaining. Cooke received the ball on the right-hand side before finding the run of Evans with a measured pass leaving Evans to seal the win for the Bantams. 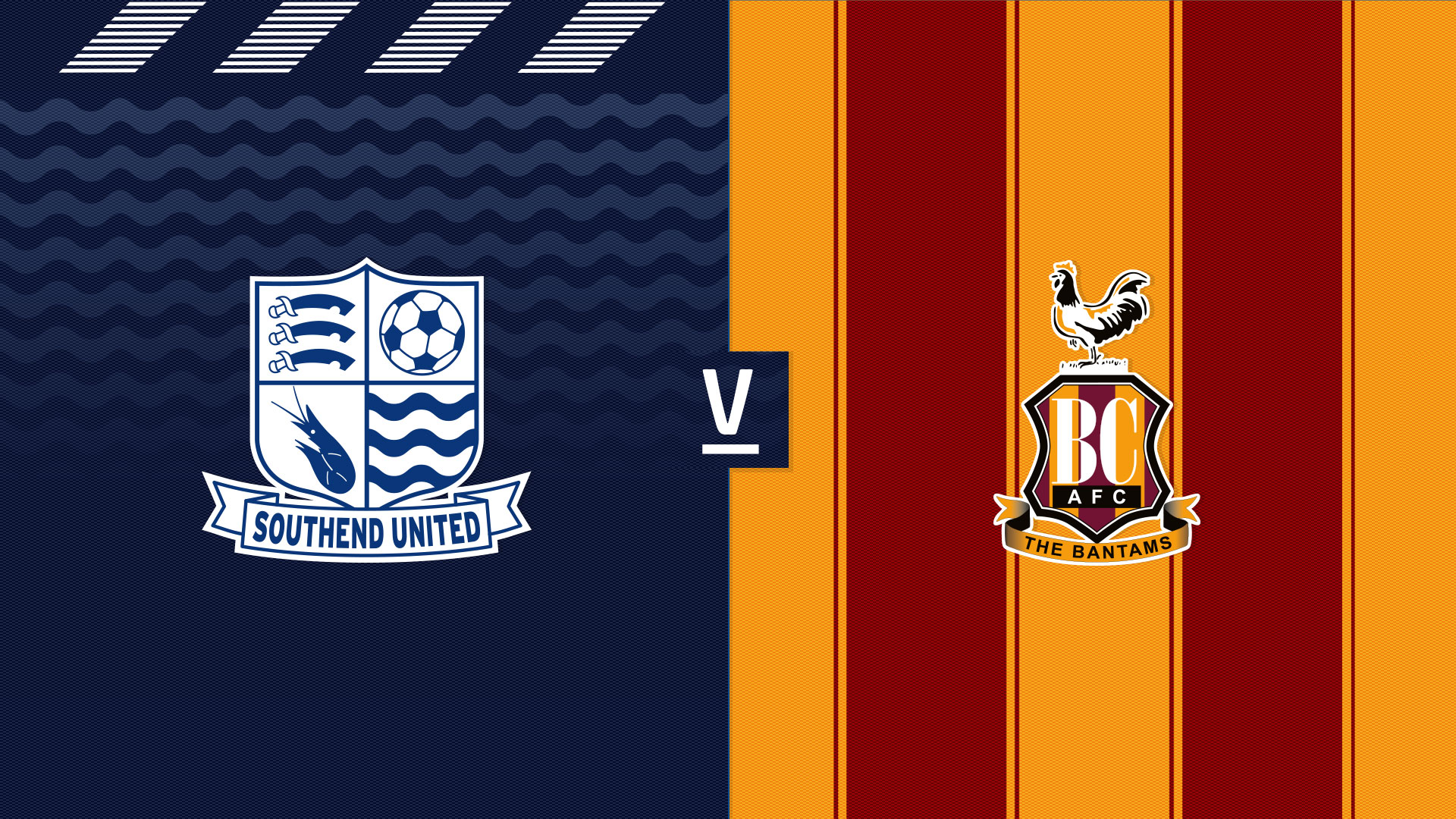 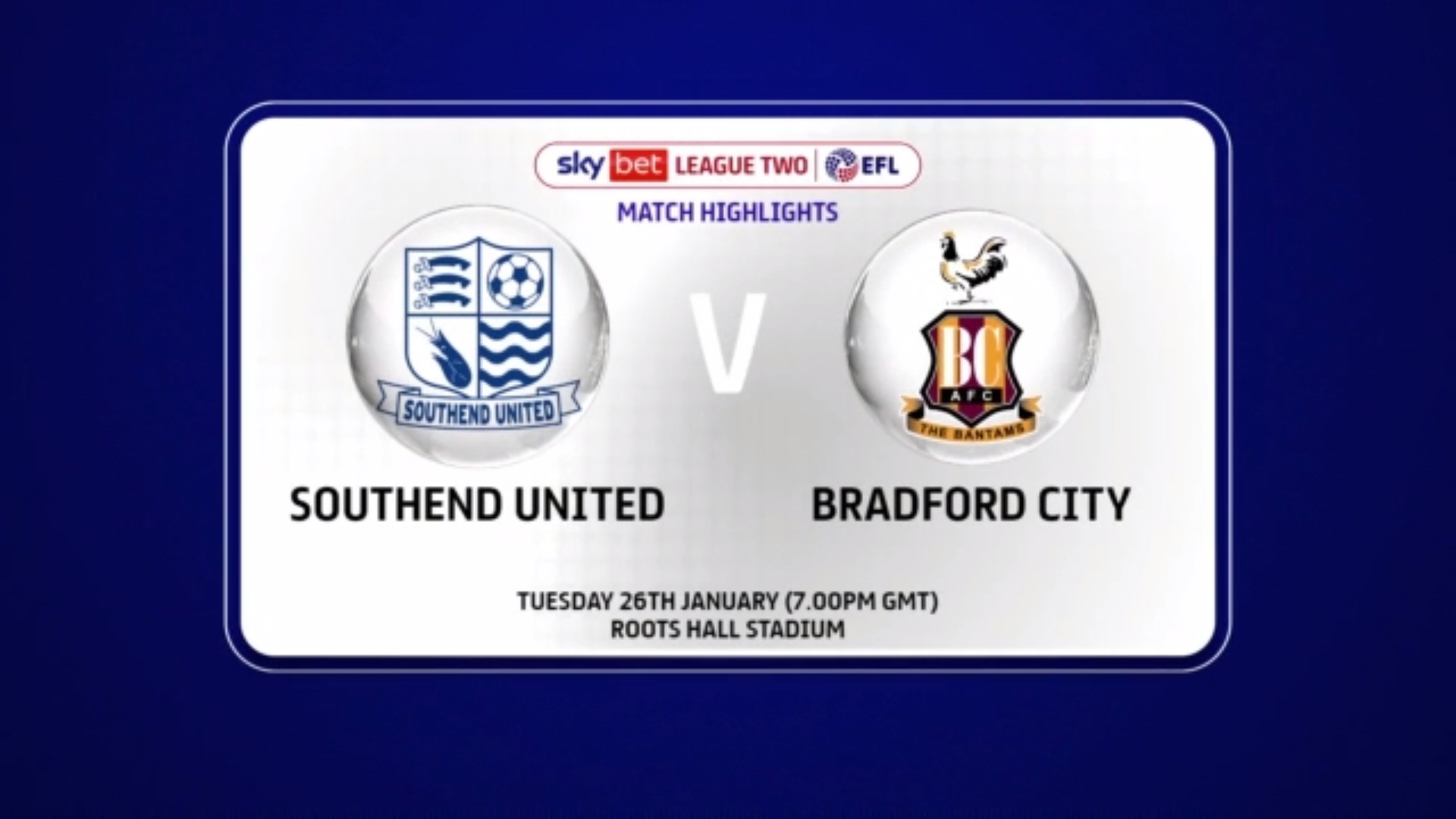 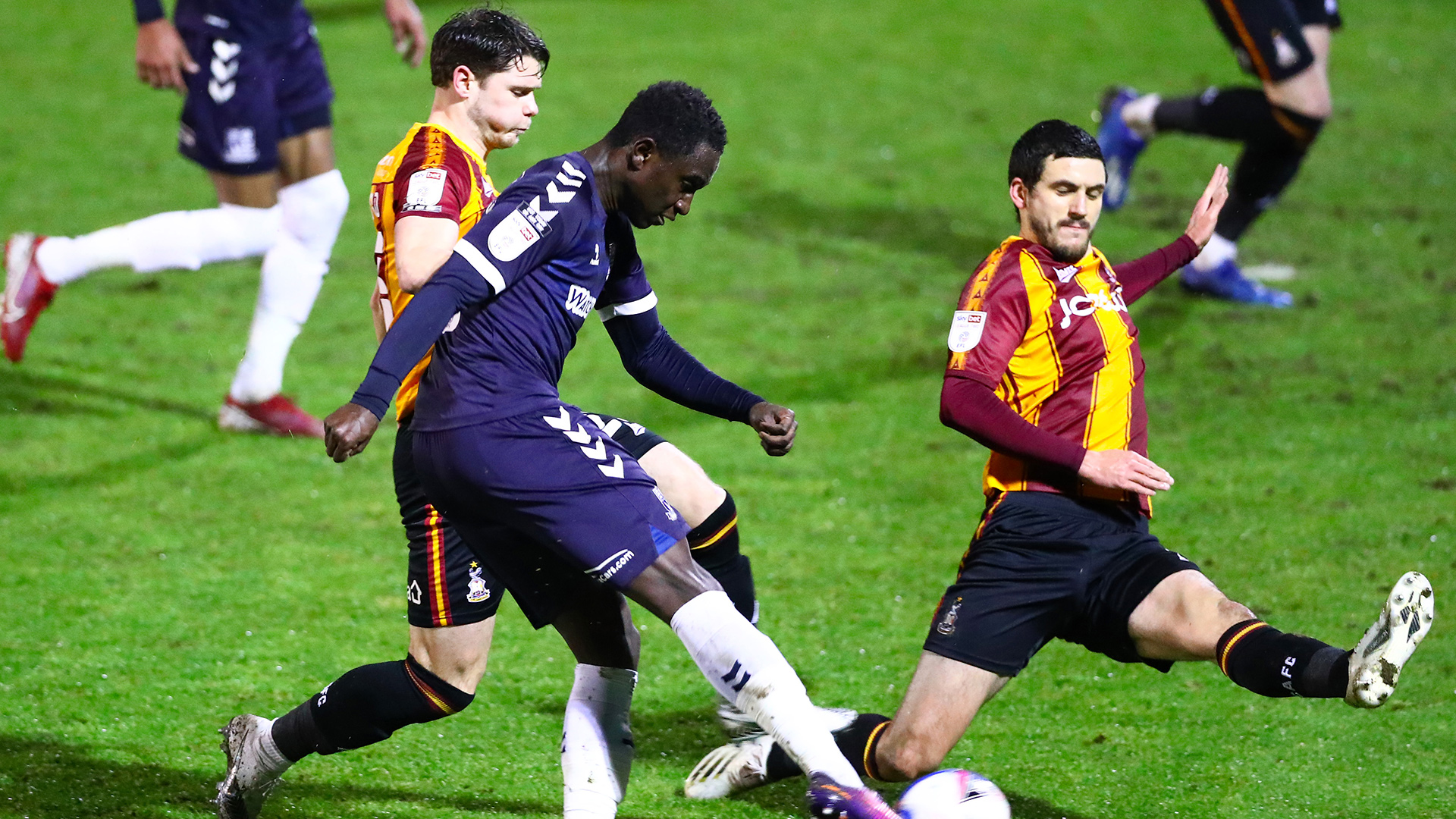