Mark Molesley’s Blues side belatedly get their 2021 underway as they welcome league new-boys Barrow to Roots Hall tomorrow afternoon.

Both sides made a false-start to the new year with Southend’s game at Newport being called off while Barrow’s home game against Exeter also fell foul of the weather.

And with both teams scrapping towards the bottom of the League Two table, it means making a winning start to the new year becomes that little bit more important.

Blues’ last game of 2020 saw them fall to a 2-0 defeat at Leyton Orient which put an end to their unbeaten run which had stood at five matches.

During that time, Southend had picked up two draws on the road at Stevenage and Mansfield, and three home wins against Scunthorpe, Grimsby and Colchester United.

Barrow have seen a recent upturn in their results which has them coming into Saturday unbeaten in three thanks to wins against Cheltenham and Port Vale, and a draw against Tranmere.

The Bluebirds took the spoils the last time these two sides met back in 1972 with a 2-1 win at Holker Street which avenged Southend’s 1-0 victory at Roots Hall earlier that season.

Blues would finish the 71/72 campaign by gaining promotion to the old Third Division while Barrow were voted out of the League in favour of Hereford after finishing in the bottom four.

"Michael Jolley's only been there for a short time and he’s a very astute coach, a very good football man.

"Barrow would’ve been very selective with who they brought in and I think he’d be along the same philosophy and the same lines.

"I’ve been nothing but impressed with Barrow every time I’ve seen them. They play a lovely brand of football, they’ve been in every game they’ve played in, they’re a very good side and probably just fall victim, a bit like us, this season of maybe not being as ruthless as they would’ve liked. They certainly have the players to do that.

"Like I say, I’ve been nothing but impressed with them so another really tough challenge awaits us and another big game.

"But if we get our game plan right we’ve got every chance of beating anyone in this league.”

New signing Reeco Hackett-Fairchild is likely to go straight into the Blues squad on his birthday for this Saturday’s clash with Barrow after the 22-year-old joined on loan from Portsmouth until the end of the season.

A late decision will be made on fellow loanee Kyle Taylor as well as Michael Klass who’ve both been absent in recent weeks after testing positive for COVID-19.

Brandon Goodship is continuing to nurse a rib injury and is expected back in 10-14 days while Tom Clifford is closing in on a return having not played since injuring his ankle at Mansfield.

Alan McCormack did travel with the side to Newport last week, so will be available again, with the experienced midfielder now having the benefit of an extra week of training under his belt.

No doubting who Barrow’s in-form player is coming into Saturday and that would be striker Scott Quigley who’s bagged for the Bluebirds in each of his last four matches.

Quigley was instrumental in earning Barrow promotion from the National League last season, finishing as the division’s leading marksman with 20-goals.

As well as knowing where the net is, the former Blackpool striker offers a physical and aerial presence standing in at 6ft4, making him the obvious dangerman on Saturday.

Christopher Pollard will be the referee for this weekend’s clash, being assisted by Andrew Aylott and Nicholas Cooper, while Stephen Finch will be the fourth official.

Pollard took charge of Blues’ first competitive game of the season which saw Southend fall to a narrow 1-0 defeat away at Gillingham in the Carabao Cup.

Saturday will be Pollard’s 14th game of the campaign with his most recent outing being Stevenage’s 3-1 win over Scunthorpe. In his previous 13 matches, Pollard has shown 54 yellows and five reds.

With fans again not able to attend Roots Hall in person, Blues supporters can watch Saturday’s clash with Barrow by picking up a Match Pass on iFollow Blues for £10.

A Match Pass will allow you to watch the game on your laptop, computer, tablet or mobile device with Season Ticket holders already having access to their pass via their iFollow account. Please note, if you haven't informed the Ticket Office of your email address to link up with home game access, then you will be emailed with a code.

The Portsmouth loanee scored in just the third minute to give the home side an early lead, coming in from the right to curl a beautiful goal into the bottom corner from 20-yards out – the perfect gift for his 23rd birthday.

Blues though had to play most of the second period with 10 men after Greg Halford received a second bookable offence but Southend dug deep and limited Barrow to only a handful of chances while arguably having the better of the second-half chances up the other end.

The final whistle came nine minutes into stoppage time as Southend secured a vital three points - the first time since April 2015 that Blues have won four successive home games - putting them within a point of safety while Barrow remain in 20th a point above the drop-zone.

Thanks to last weekend’s game at Newport being postponed, it meant that this afternoon’s clash with Barrow was Blues’ opening fixture of 2021 and it was the first time that these two sides had met in almost 50 years since Barrow beat Southend 2-1 back in 1972.

Southend won promotion that season while Barrow were voted out of the Football League altogether and today’s meeting was arguably just as significant to both sides who were battling it out towards the bottom of the League Two table.

Mark Molesley made two changes to the side that lost to Leyton Orient. In came Greg Halford in at the back while new signing Reeco Hackett-Fairchild made his debut on his 23rd birthday and the birthday boy made an immediate impact by giving Blues an early lead.

Less than three minutes had passed when the forward picked the ball up on the right-wing, cutting onto his left foot before curling a delightful effort beyond the dive of Joel Dixon from 20-yards out to give the home side the perfect start.

Visitors Barrow came into today unbeaten in their last three games and they responded well with Mark Oxley pulling off a wonderful fingertip save to prevent Luke James levelling matters, tipping the Barrow man’s effort over the crossbar.

Blues would head into the break a goal to the good, although there was a flurry of chances for both sides before the interval. The best of which fell to Elvis Bwomono who got played into the box by Timothee Dieng only for Dixon to get down well to smother his effort.

Early into the second-half though and Southend were reduced to 10 men as Halford saw red for a second bookable offence. Having been already been booked for a late challenge on Josh Kay, Halford was late again on Scott Quigley resulting in him receiving his marching orders.

Molesley’s side were now up against it but they had a glorious chance to double their lead and give themselves some daylight as James Olyainka broke clean through, but under pressure from Tom Beadling, Olayinka couldn’t get his shot away before Simeon Akinola fired over.

Despite the man disadvantage, Blues again had a great chance to score when Olayinka was picked out by a measured ball over the top by Deing only for the Arsenal-loanee’s touch to let him down at the vital moment as Barrow cleared their lines.

With 20 minutes remaining, the Bluebirds replaced a full-back for a striker as Dior Angus came on to try and force their way through to an equaliser and the substitute had a decent chance to level when he was found with a cross from the left but could only head over.

Southend remained resilient and had yet another chance to kill the game off as sub Ashley Nathaniel-George went on a mazy run which landed at fellow sub Alan McCormack’s feet, but the experienced midfielder could only stab his effort off target.

Barrow were always going to get chances late on and they saw a free-kick from Kay hit the wall before James appealed vehemently for a penalty for a foul by Sam Hart that wasn’t given. James then received the ball with space to pull off a shot that was deflected clear.

Blues had seven minutes added on at the end to survive and try as they might, Barrow couldn’t get through as Southend continued to defend brilliantly with the final whistle finally going in the ninth minute of stoppage time to earn Southend as massive three points. 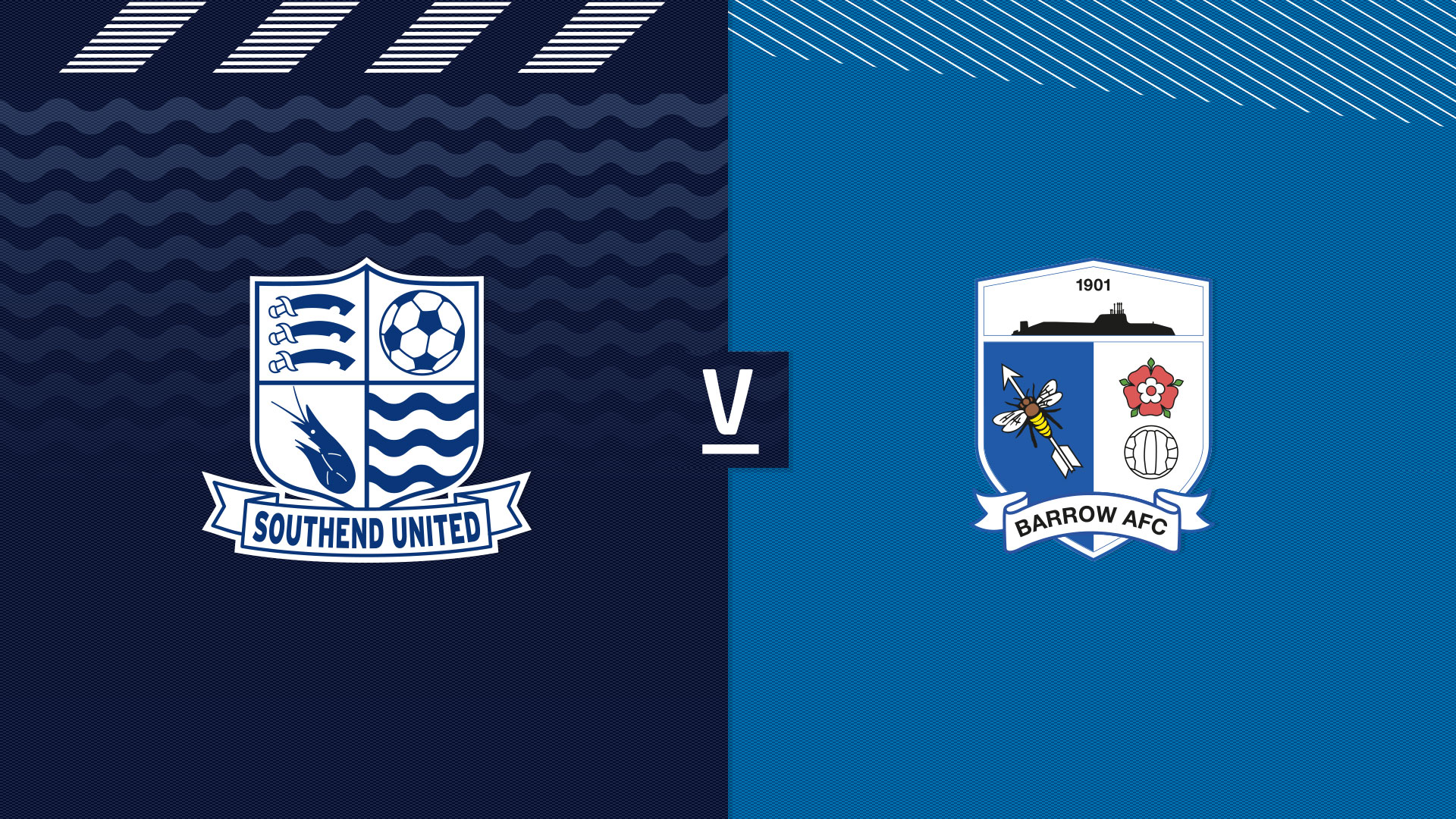 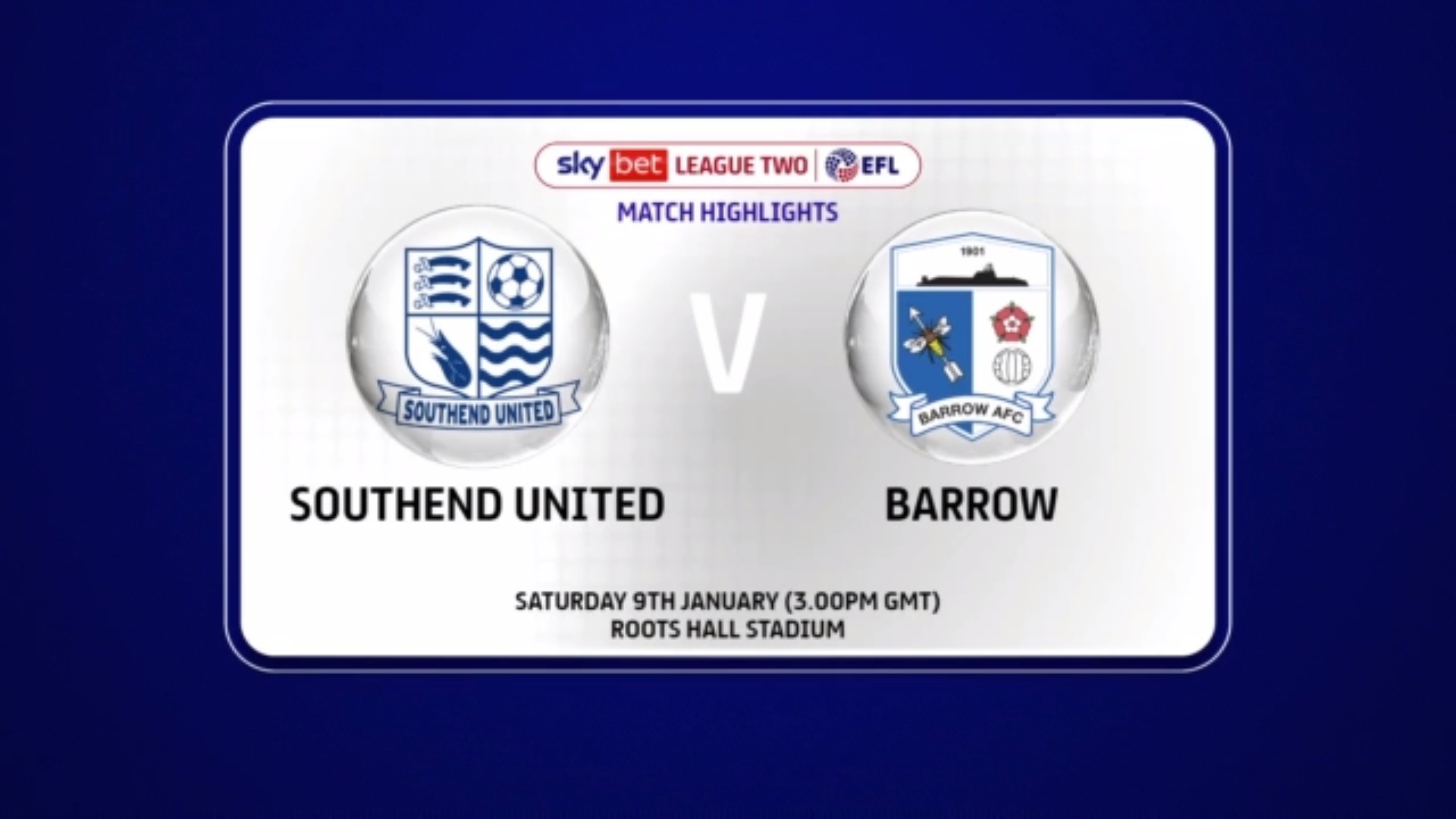 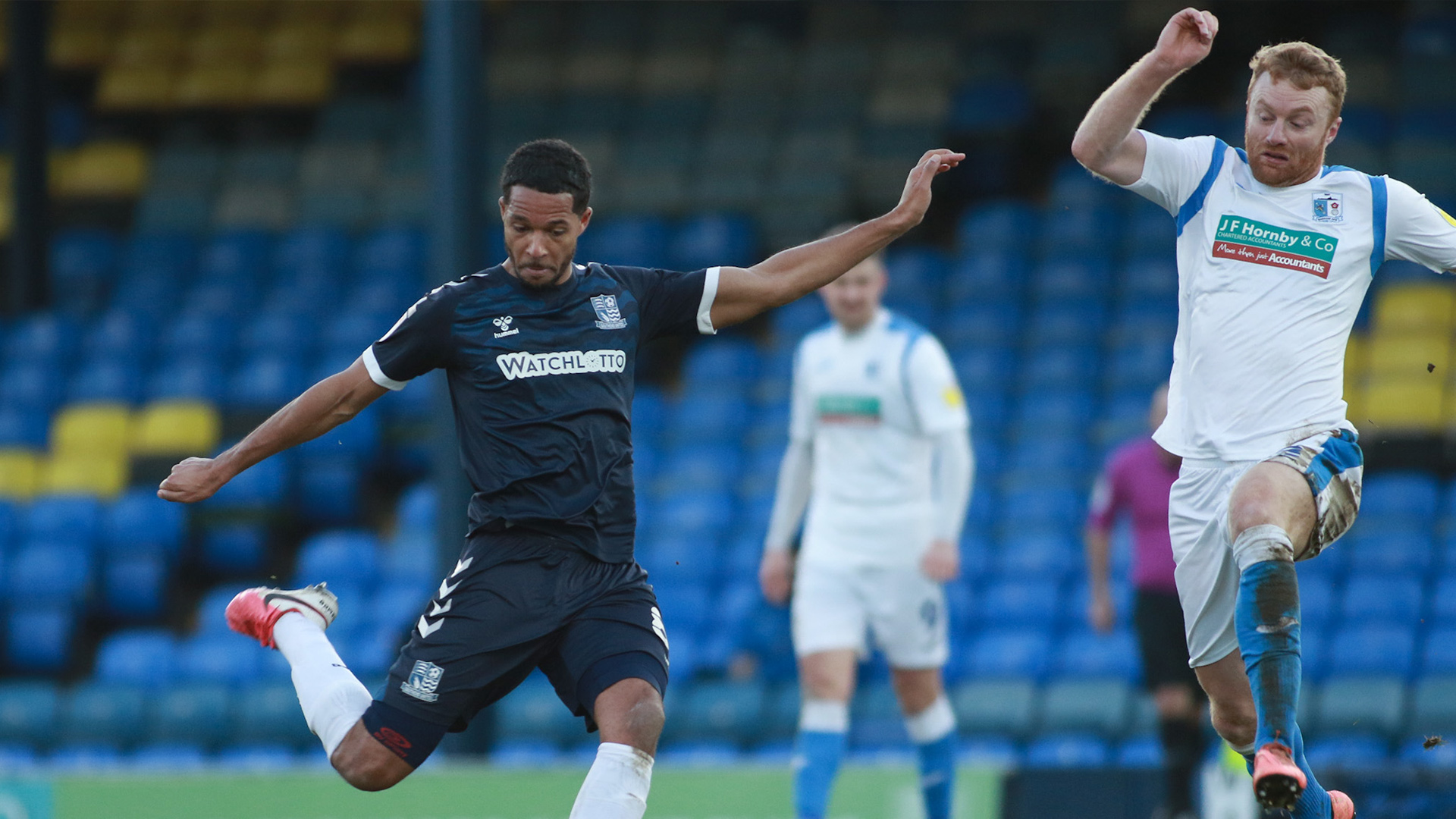