It’s a quick turnaround for Blues as they welcome Salford City to Essex tomorrow afternoon in what will be a first visit to Roots Hall for Richie Wellens’ Ammies.

After Wednesday night’s superb win for Mark Molesley’s side, confidence will be high in the Southend camp as they look to replicate their recent good away form at home.

Salford though travel with their sights firmly set on promotion to the third tier and sit just outside the play-off places going into this weekend with another vital three points on offer to both clubs.

Southend’s excellent 3-1 win away at Forest Green Rovers in midweek more than made up for the disappointment of last Saturday where Blues were unfortunate to lose 1-0 to Bolton at home.

Molesley’s side have picked up two wins and a draw from their last six outings, with the win at Rovers adding to a win at Newport and a draw against league leaders Cambridge.

Salford fell to a last-gasp defeat to Morecambe last time out, conceding twice in stoppage time to lose 2-1. The Ammies have recorded two wins, two draws and two defeats from their last six.

Caretaker boss Paul Scholes guided Salford to a comfortable 3-0 win against Southend in the two side’s first-ever meeting back in October.

Harry Lennon’s own goal set the ball rolling before James Wilson added a second. Ian Henderson’s header then deflected in off Jason Demetriou to wrap up a big win for the home side.

Mark Molesley: "Whatever has happened previously has gone and counts for nothing now, it's about the next game and we've got to make sure we keep to those standards.

"We need consistency and to not go long periods without a win. We've worked hard, put in some good performances and the lads' belief and attitude has never wavered.

"We've got to continue to build on that.

"We have to show the same attitude as we did on Wednesday; that high energy, that real belief that you could see from the first whistle in how hard the boys worked for each other."

On coming up against Salford: "They're a fantastic football team, got some good players and they're well backed. They play an attractive style of football and have got an experienced manager who has done great things in the game.

Sam Hart was a noticeable absentee from the travelling part on Wednesday night with the defender having aggravated his groin in an in-house game earlier in the week. He will again be sidelined.

Nile Ranger is available for selection after returning to training earlier this week, while Molesley also said on Friday that Jacob Mellis is getting a lot closer to full fitness now.

There appeared to be no other fresh injury concerns from the trip to Nailsworth which saw the return of Alan McCormack to action from the bench in his first appearance in a month.

However there was good news with Egbri and Olayinka, who both returned to training on Friday.

Ian Henderson continues to roll back the years and be one of Salford’s biggest threats in front of goal with the 36-year-old banging in four in his last five, making him tomorrow’s dangerman.

The wily veteran brought up double figures in the league this season thanks to his winner against Barrow a little under a fortnight ago and he has 11 goals in total to his name this campaign.

Henderson is no stranger to scoring against Southend either with the striker notching in meetings in both of the last two seasons, and he’ll be looking to make it a hat-trick, of sorts, tomorrow.

Whitestone has predominantly officiated in the Championship this season, clocking up 44 yellow cards and three reds from his 23 games so far.

The Northamptonshire referee’s last visit to Roots Hall was on Easter Monday 2019 when Blues won a 3-2 thriller against Burton Albion.

With fans not able to attend Roots Hall in person, Blues supporters can watch tomorrow’s game with Salford by picking up a Match Pass on iFollow Blues for £10.

Southend United picked up another potentially vital point as they drew 0-0 with Salford City at Roots Hall.

After a tight opening half an hour, Blues created some great chances to score with Emile Acquah twice testing Vaclav Hladky before Hladky again was needed to save a deflected Nathan Ferguson effort in the second-half.

Emergency loan signing Alex Bass was only able to last 45 minutes before being replaced by Harry Seaden and the young stopper made a couple of vital saves, the best of which come from point-blank range to prevent Ian Henderson.

The point for Blues, combined with defeats for Barrow and Grimsby, leaves them two points above the relegation zone going into Tuesday night’s trip to Cheltenham Town. Salford on the other hand drop to ninth and are a point outside of the play-off places.

Following Wednesday’s superb win at Forest Green Rovers, Mark Molesley chose to go with the same 10 outfielders that began the game in midweek, with his only change being in goal as Mark Oxley was ruled out through injury, being replaced by emergency loanee Alex Bass.

It took a while for the game to get going at Roots Hall with nothing of note until almost the half-hour mark, but when it did start to pick up, Southend were the ones that were looking the most likely to trouble the scoreboard with Emile Acquah having a couple of golden chances to score.

The young striker’s first opportunity came thanks to a superb defence-splitting pass from Timothee Dieng which allowed Acquah to get goal side. His shot had the necessary power but was straight at goalkeeper Vaclav Hladky who got his body in the way to save the shot.

From the resulting corner, Shaun Hobson saw an effort flash across the face of goal before Acquah then had another opportunity late in the half when John White headed Nathan Ferguson’s cross back across goal only for Acquah to head the ball straight at Hladky from six-yards out.

Having appeared to be struggling with a knock as the first-half went on, goalkeeper Bass failed to emerge for the second-half and was replaced by Harry Seaden for just his second league appearance for Blues and his first since February 2020 against Gillingham.

It took 10 minutes for Seaden to be called into action for the first time as Robbie Gotts played a ball back across goal that needed tipping over. Jordan Turnbull was first to the resulting corner, but his flicked header failed to trouble Seaden as it floated over the crossbar.

That had been the best Salford had mustered so far, while Southend continued to have the better of the chances on goal and Wednesday night’s viral-sensation Ferguson went close to putting Blues in front when his low, deflected strike had to be tipped around the post by Hladky.

Salford would respond by creating their clearest chance of the afternoon by far when Ash Hunter headed down a long fall forward into Ian Henderson, whose first-time effort was superbly saved from close range by Seaden as Southend scrambled clear.

The visitors were starting to press forward more often now and Di’Shon Bernard tested Seaden with a driven effort that was comfortably held by the ‘keeper as five minutes of added on time were shown for either side to nick a winner.

Salford had a chance fall to Hunter in stoppage-time, but he dragged his shot wide, before the visitors had a shout for a penalty after a coming together between Ashely Nathaniel-George and Richie Towell which referee Dean Whitestone waved off as both sides settled for a point. 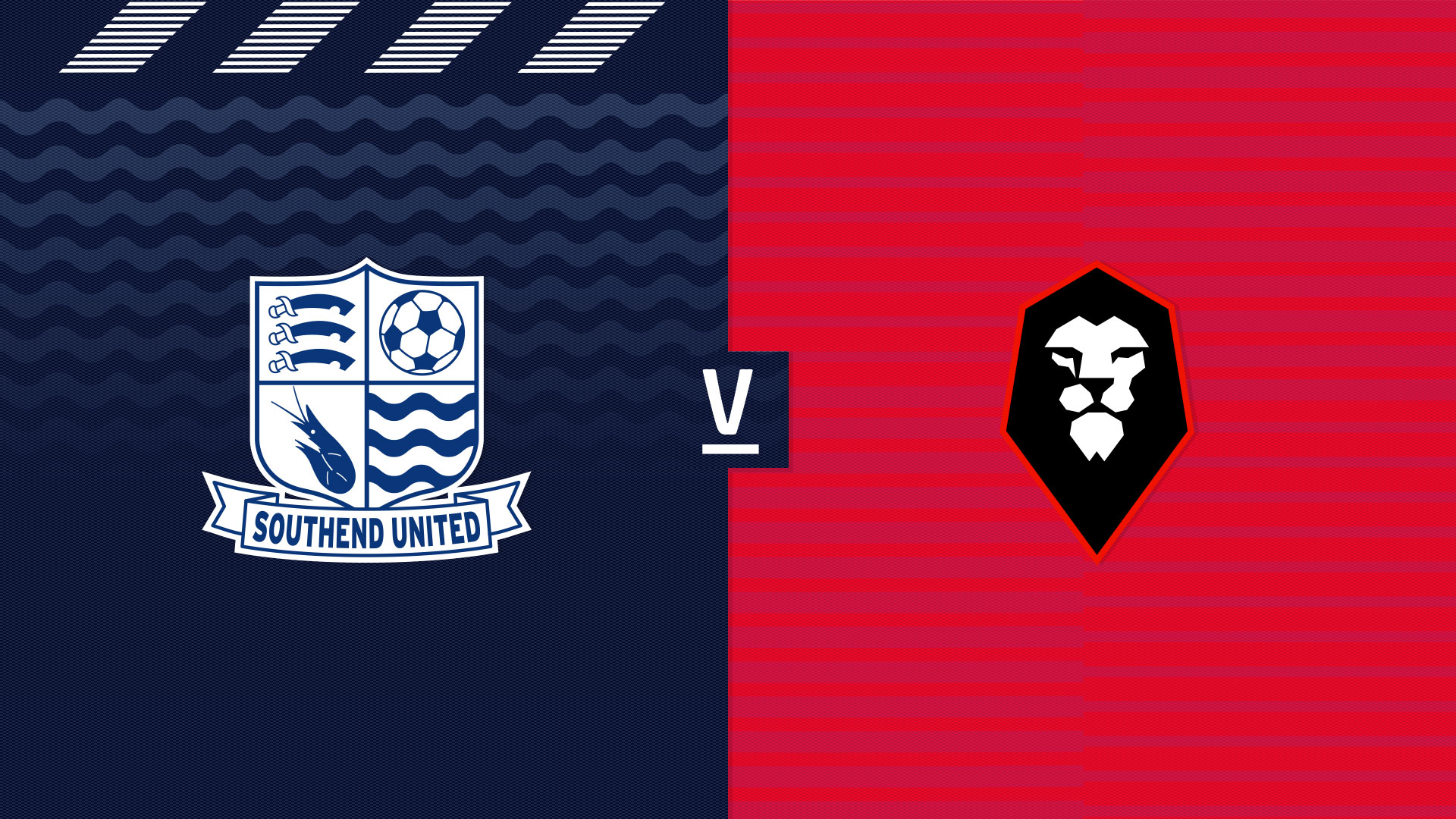 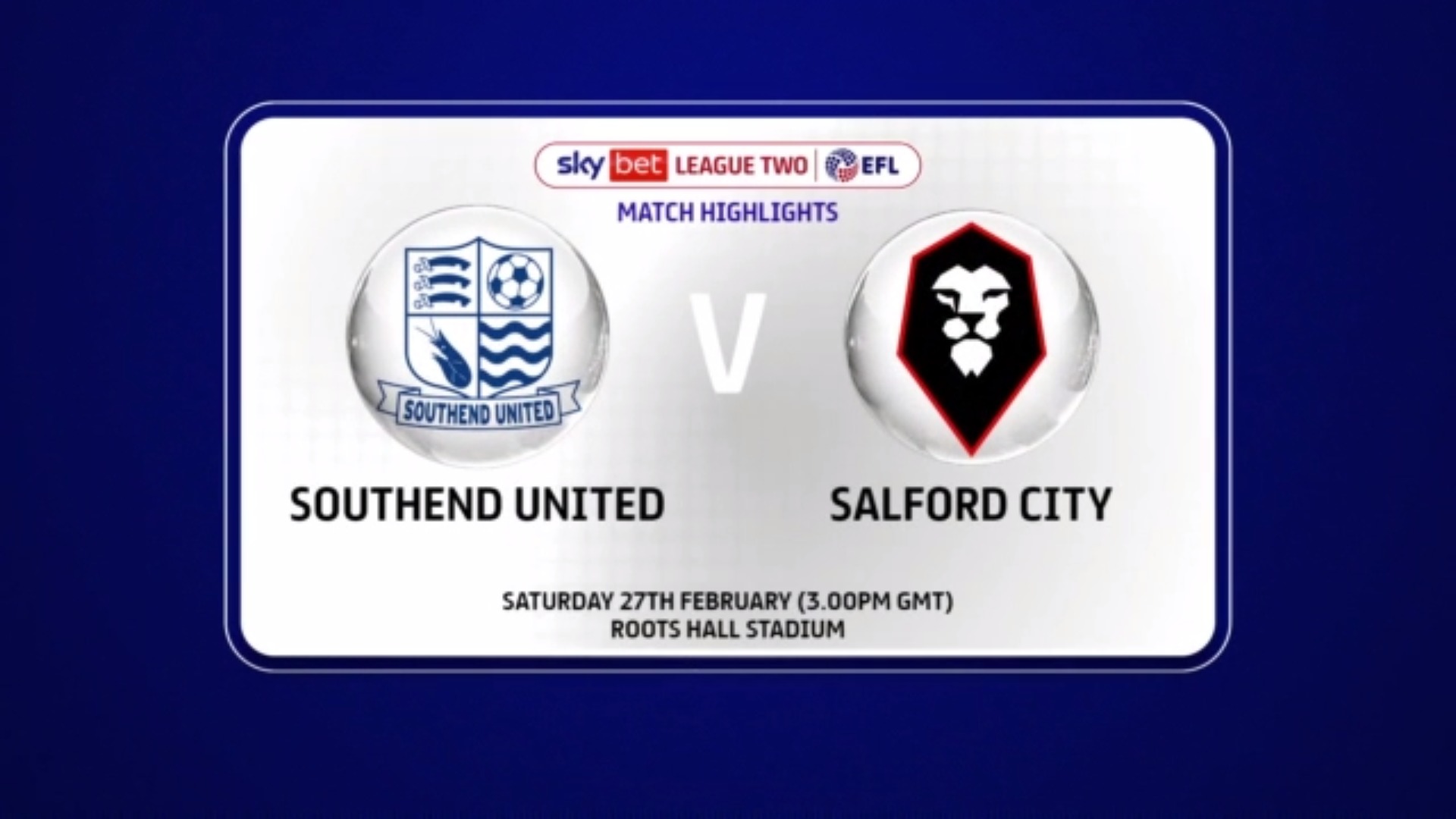 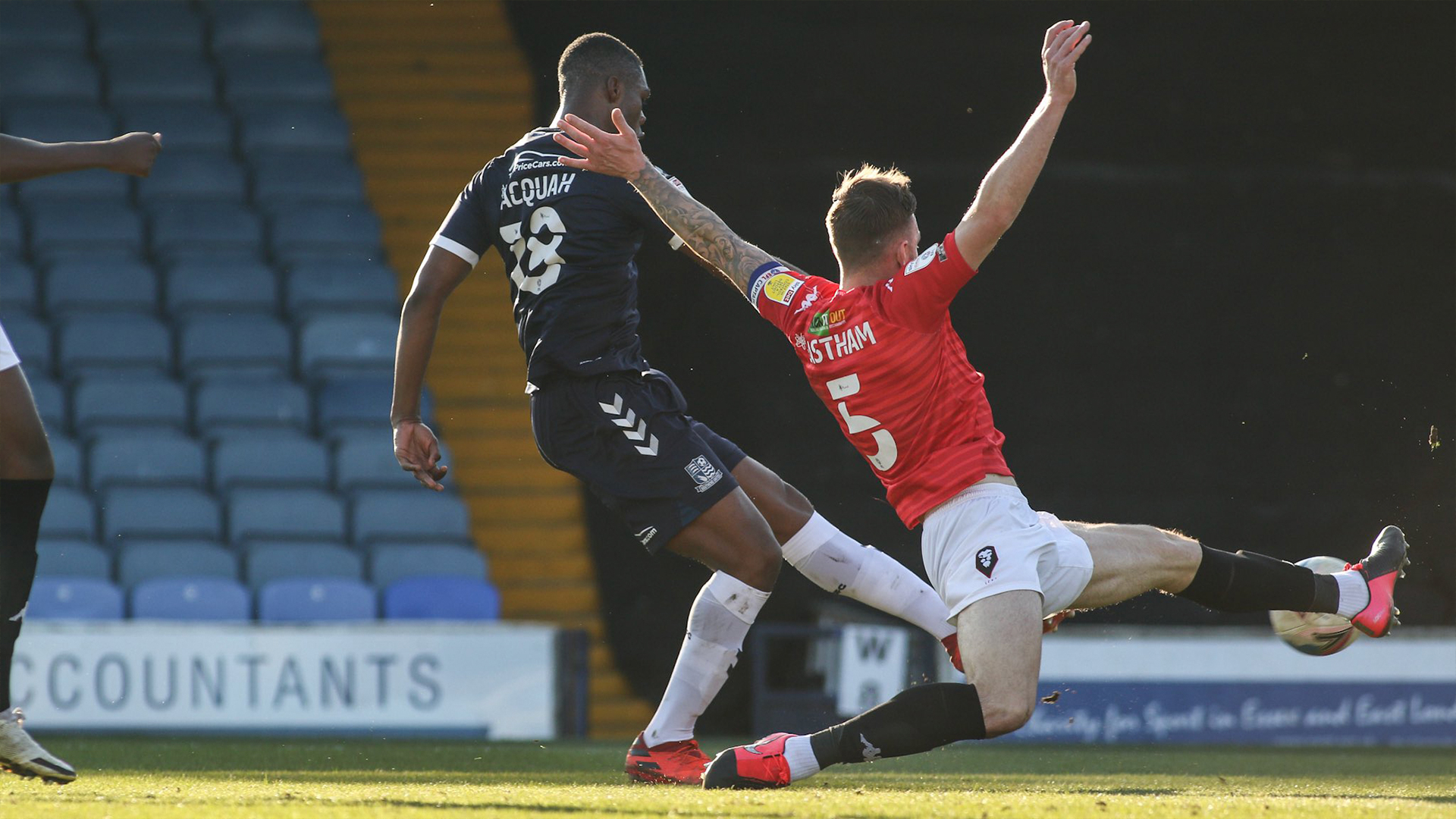