Blues will be hoping Campbell’s appointment can spark an upturn in their fortunes in what is likely to be a raucous atmosphere in Essex with Ipswich expected to bring 2,500 fans down from Suffolk.

And with tomorrow being the last home league game Campbell’s side will have for four weeks, they’ll be keen to go on their travels with a first home win of the season under their belts.

Southend go into tomorrow’s clash off the back of a humbling 7-1 defeat at the hands of Doncaster Rovers on Tuesday with Blues ending the game with nine men.

Ipswich have stuttered in the last week. The Tractor Boys lost 2-0 to Accrington last Sunday and 2-0 to Rotherham on Wednesday, having won seven of their last eight games prior to last weekend.

A freak goal from Mark Gower and a Peter Clarke strike gave Blues a vital 2-0 win over Ipswich Town at Portman Road as Southend continued their fight for survival in the Championship.

Gower’s goal came as his left-wing cross floated all the way in to give the visitors the lead before Clarke volleyed in Kevin Maher’s free-kick seven minutes later to secure the win.

Southend will be without the suspended Ethan Hamilton, Stephen McLaughlin and Harry Lennon following Tuesday's defeat to Doncaster. Hamilton and McLaughlin were both shown straight reds while Lennon picked up a fifth yellow of the season.

The suspensions for Hamilton and McLaughlin in particular leave Blues very light in midfield with the likes of Sam Mantom and Luke Hyam still out through injury meaning Sol Campbell will need to be creative with his selections.

Charlie Kelman and John White are the other certain absentees as both continue to recover from ankle and arm injuries respectively.

Talented youngster Kane Vincent-Young is one to look out for tomorrow afternoon with the former Colchester United wing-back having impressed since joining Town in the summer.

The 23-year-old scored four times in his time at Col U but has already scored twice for Ipswich this season, grabbing the winner at Gillingham before scoring again a few days later against Tranmere.

Playing in a slightly more advanced position, Vincent-Young has pace to burn with a trick or two for good measure, making him a handful for opposing defences when going forward.

The referee in charge for tomorrow’s clash will be Andy Davies from Hampshire, who is assisted by Darren Blunden and Adrian Waters, with Michael George sitting in as fourth official.

It’ll be Davies’ first visit to Roots Hall since January 2017 when he last oversaw Blues in their 4-2 defeat against that season’s League One champions, Sheffield United.

So far this season, Davies has taken charge of 10 games in which he’s shown 29 yellows and no reds, with his last outing being last weekend’s 2-0 win for Stoke at home to Fulham.

You must have a purchase history to be able to buy a ticket and there will be no option to buy tickets on the day of the game.

Make sure you don’t miss out on Sol Campbell’s first game in charge of Blues and get your ticket today with more information available by clicking here.

Sol Campbell’s reign as Southend boss began with a 3-1 defeat at home to Ipswich Town as James Norwood’s double and a Kayden Jackson strike secured the points for the visitors.

Blues thought they had made the perfect start under their new boss when Rob Kiernan headed in an Isaac Hutchinson free-kick only for it to be ruled out for offside.

Ipswich would then take the lead through Norwood after Jackson’s long ball forward allowed the Town striker to get goal side before he fired into the bottom corner after eight minutes.

Norwood would put daylight between the two sides midway through the second-half, again getting on the end of a Jackson pass to find the bottom corner and double their lead.

Provider then turned goal scorer ass Jon Nolan’s long-range shot was parried by Mark Oxley into the feet of Jackson who took a touch to compose himself before slotting the ball in.

Emile Acquah would grab a consolation goal late on, scoring his first senior goal for the club from close range, but it was another defeat for Blues who are yet to win at home this season.

The win for Ipswich saw them return to the top of the League One table, ending a run of two straight defeats, with Southend facing another big task next weekend away at Sunderland.

Having watched Blues’ 7-1 defeat to Doncaster Rovers in midweek, Sol Campbell knew he had a big job on his hands taking over at Blues who went into this weekend eight points from safety.

And for his first game in charge of Southend, Campbell would make three changes and went with an attacking line-up which saw Simon Cox, Tom Hopper and Stephen Humphrys all starting.

But it was one of Campbell’s defensive changes that looked to have given Southend the perfect start when Rob Kiernan nodded the ball into the back of the net in just the fourth minute.

Isaac Hutchinson’s free-kick from wide on the right was headed beyond Will Norris in the Ipswich goal, but Blues’ celebrations were cut short as the linesman’s flag was raised for offside.

Having survived that scare, Ipswich would go and open the scoring just a few minutes later as James Norwood would capitalise on a long ball forward to break the deadlock.

Kayden Jackson’s looped ball forward allowed Norwood to get goal side. Hesitation from Mark Oxley let the Town striker get to the ball first, blasting it into the bottom corner to give Ipswich the lead.

In blustery conditions on the Essex coast, further chances for either side were few and far between, but it was the visitors who certainly had the better of the opportunities.

Southend’s best chance came when Elvis Bwomono’s cross-shot evaded the stretching Tom Hopper and Stephen Humphrys as the ball flew out of play.

Paul Lambert’s side were able to test Oxley again before the interval with the Blues goalkeeper making a smart double save, first from Jon Nolan before saving Jackson’s follow-up.

And The Tractor Boys had a great chance to double their lead go begging right on half time as Luke Garbutt’s corner was headed back across goal by Norwood only for Luke Chambers to head wide.

The next goal in this one was likely to be crucial and Ipswich looked the most likely to grab a second, with a Garbutt free-kick that went around the wall but couldn’t find the inside of the post.

Gwion Edwards then went just as close with a curling effort that zipped past Oxley’s left-hand upright but within seconds of that chance, Norwood would all but kill the game off with his second.

Jackson again was the provider as the Town number nine got to the byline and cut the ball back for Norwood who, first time, slid the ball into the bottom corner to put daylight between the two sides.

Southend now had a mammoth uphill battle to contend with and Ipswich would seal the points as Jackson got himself on the scoresheet having previously set up both of Norwood’s goals.

Nolan would inadvertently set up the Town number nine with a long-range effort that was parried out by Oxley, with Jackson cooly taking a touch before slotting the ball in to make it three.

Blues weren’t looking likely to get back into the contest as the minutes ticked away but they would grab a consolation goal late on through the substitute Emile Acquah.

Nathan Ralph’s left-wing cross caused problems in the Ipswich defence before the ball fell kindly to Acquah to tap in from close range for his first senior goal for the club, as the game finished 3-1.

Southend United's new manager Sol Campbell takes charge of his first Blues game this weekend, as his side take on top of the league Ipswich Town.

The appointment of Sol will bring a new lease of life into the squad with his vast experience in the game, and competitive attitude and it's just the boost that the team needs.

We want all of you to get behind the boys and make some noise!

Make sure you don't miss out on his first game in charge and purchase your tickets for this fixture now.

Today is the last day for fans to purchase match tickets and they will come off sale at 5pm today!

Please note that tickets for this fixture are only available in advance, there will be no pay on the day service available and you must have a purchase history (bought previous Southend tickets) to qualify for an Ipswich Town match ticket.

*Students will be required to provide proof that they are in full-time education to qualify for the concessionary rate.

Members of the emergency services can purchase tickets to the game for a discounted price of £15 with proof of ID when bought in advance of the game. 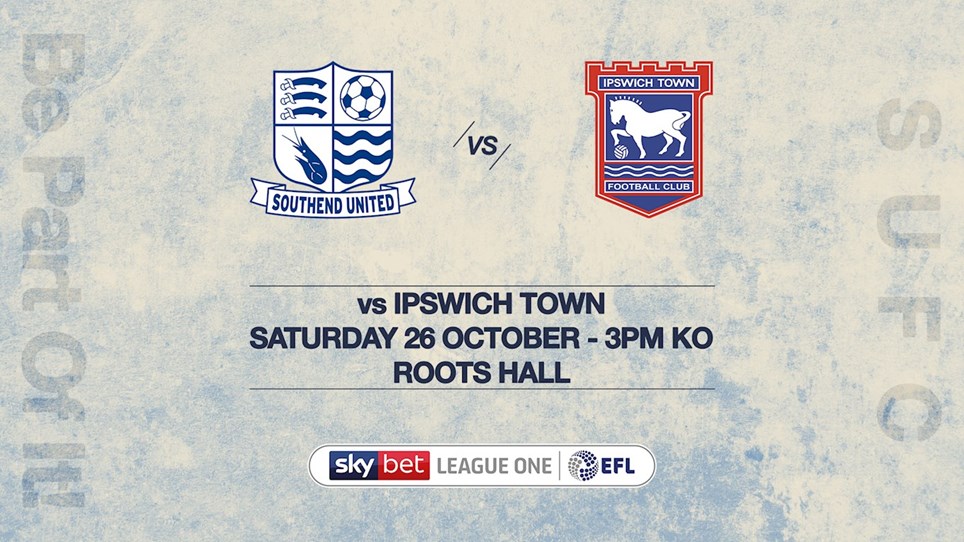 
Supporters are advised that tickets for the game against Ipswich Town at Roots Hall on Saturday 26 October will NOT be available to purchase on the day.