Southend United travel to the Crabble Athletic Ground to take on National League side Dover Athletic in the First Round of the Emirates FA Cup this Sunday, live on BT Sport (12pm KO).

Manager Sol Campbell won the FA Cup four times as a player with Arsenal and Portsmouth and he’ll be hoping that those happy memories can drive him onto a first win as Southend boss.

But in former Gillingham boss, Andy Hessenthaler, Dover have an experienced manager who will know more than a thing or two about Sunday’s visitors as his side aim to cause a cup upset.

Blues’ winless run continued in midweek thanks to a 4-1 defeat to Portsmouth at Fratton Park with Southend now without a win in nine matches in all competitions.

New boss Sol Campbell has had a baptism of fire facing Ipswich, Sunderland and Pompey in his first three games as Blues manager, with Southend having picked up just two wins all season.

Dover currently sit 12th in the National League and come into the weekend off the back of a 3-1 win over Eastleigh at home before a goalless draw in midweek away at AFC Fylde.

Southend and Dover have met just the once before, during the 1975/76 season where the two sides met in the FA Cup Second Round at Roots Hall, with Blues running out comfortable 4-1 winners.

Having beaten Swansea in Round One, Southend surpassed Dover before beating Brighton and Cardiff to make the fifth round where they eventually fell to Derby County.

One midfielder not available though is Sam Mantom who remains on the sidelines with the 27-year-old expected to be out for another couple of weeks with a hamstring problem.

Mantom is joined by Stephen Humphrys, Charlie Kelman and John White on the injury list along with long-term absentees Sam Barratt and Harry Kyprianou.

Inih Effiong will certainly be Dover’s dangerman on Sunday with the 28-year-old up there as one of the top goal scorers in the whole of the National League.

Effiong has scored nine times for The Whites already this campaign, which is the same amount of goals he scored for Dover in the league during the whole of last season.

The 6ft 3in striker scored seven goals in a nine-game spell earlier in the year and recently ended a six-game goal drought with a brace in Dover’s 3-1 win over Eastleigh.

David Rock will be in charge at the Crabble Athletic Ground on Sunday, being assisted by Leigh Crowhurst and Mike Desborough with Dean Whitestone standing in as the fourth official.

Rock has officiated 10 matches so far this season, brandishing 23 yellow cards and one red, with his last outing the 1-1 draw between Leyton Orient and Carlisle United in League Two.

It’ll be the first time that Rock has refereed a game involving Blues, though he’s more familiar with Dover having taken charge of Dover 18 times in his career, including three matches last season.

The Crabble Athletic Ground is found in a picturesque setting, situated into a hillside on one side of a river valley with the ground surrounded by trees which overlook the pitch.

Behind each goal is a terrace, with the main stand – which has a second tier for directors and corporate guests – opposit the newly built family stand which was introduced in 2016.

Blues fans heading to the south-east of Kent will mostly find themselves in the Dover End Terrace which can hold up to 2,000 fans with the Crabble as a whole having a capacity of 5,745.

Sunday’s match at Dover will be all-ticket with no pay-on-the-day option available, with Southend being given an allocation of 2,000 tickets – 112 of which are seated.

Tickets are on general sale until 3pm today (Friday 8th November) and all tickets must be collected in person from the Blues Box Office as there will be no option to collect on matchday.

You must collect your tickets from the Blues Box Office before by close of play on Friday 8 November unless arrangements are made with the Box Office to pick up on Saturday between 10am and 3pm. 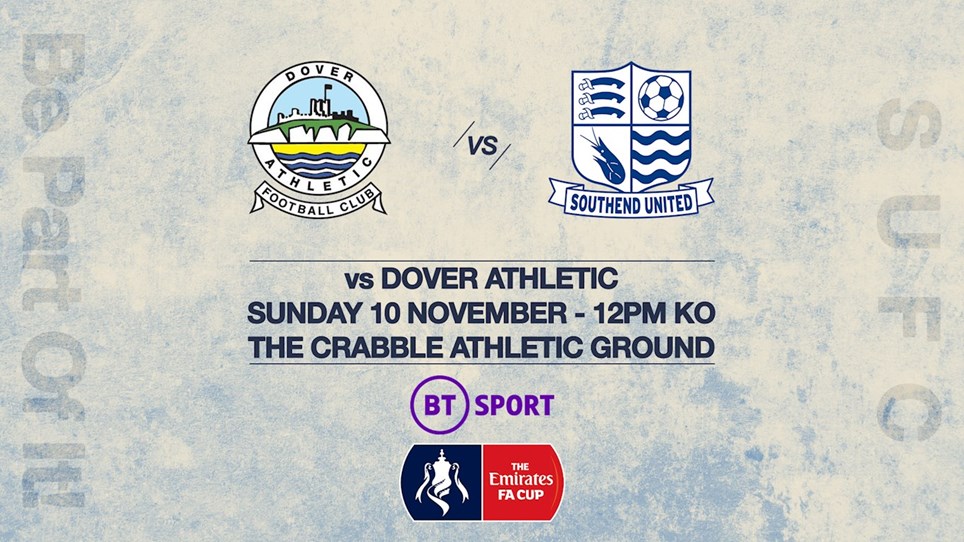 
Southend United’s trip to Dover Athletic in the Emirates FA Cup First Round will be played on Sunday 10 November, 12.00pm kick-off.

Southend United fell at the First Round stage of the Emirates FA Cup after Ruel Sotiriou’s late strike condemned Blues to a 1-0 defeat against Dover Athletic at the Crabble Athletic Ground.

After a first-half which saw clear chances at a premium, the home side would belie their position of 12th in the National League to look the most threatening of the two sides.

And after sub Nassim L’Ghoul had gone closest with a header straight at Nathan Bishop, another sub Sotiriou would put the non-league side into Monday night’s draw with a goal six minutes from time.

The final whistle drew huge cheers from the home side who’d beaten a tier-three side for the first time while defeat for Blues piled more misery on Sol Campbell’s side.

Having yet to pick up a win since joining the club, Campbell picked a strong Southend line-up for the trip to the Crabble Athletic Ground, making just the two changes from Tuesday night.

In came Ethan Hamilton and Stephen McLaughlin who both returned from suspension for Blues who created a couple of early opportunities to open the scoring on the Kent coast.

Timothee Dieng, who was wearing the captain’s armband for the afternoon, had a great chance from Isaac Hutchinson’s whipped corner but he failed to connect with his header.

McLaughlin then had a chance go begging when Elvis Bwomono bombed down the right, cutting the ball back for the winger who took a touch only to fire well over the crossbar.

Dover’s attacking threat all looked to be going through their 6ft3in top scorer Inih Effiong and he created a chance for Jai Reason with a knockdown which Reason blazed over.

Reason then forced a really good save out of Nathan Bishop with a low drive from outside the penalty area which needed tipping around the post at full stretch by the Blues goalkeeper.

The home side would end the half strongly and went within inches of going in front at the break when Jack Munns’ corner deflected towards goal with Blues needing Tom Hopper to clear off the line.

Neither side could really get going after the half-time break but it was Dover who had the better of the scarce chances, first firing an effort over the bar from outside the box.

Effiong would be key again to the home side as he held the ball up for Bobby-Joe Taylor, teeing the ball back for the Dover full-back who saw his effort blocked by some last-ditch Blues defending.

From the resulting corner, Paul Rooney climbed highest to beat Bishop to the aerial delivery but the centre-back powerful header flew over the crossbar and into the terrace behind the goal.

In an attempt to grab a winner, Sol Campbell threw on Simon Cox and Emile Acquah with a little over 15 minutes remaining but Andy Hessenthaler’s side continued to look the most likely to nick it.

Substitute Nassim L’Ghoul would see a glorious chance go begging, heading Aaron Simpson’s cross straight at Bishop but it was another substitute who would write the headlines moments later.

Ruel Sotiriou, who had only just come on, bundled Harry Lennon to the ground before running through and fizzing his shot past Bishop and put Dover minutes away from a cup upset.

Southend immediately threw everything forward trying to force an equaliser and they had a huge appeal for a penalty turned down after Bwomono appeared to be scythed down in the box.

The appeals though were to no avail as Dover went up the other end and rattled the crossbar with a long-range effort from Reason which would have killed off Southend’s hopes had it gone in.

Half-chances came and went for Simon Cox and Isaac Hutchinson but Blues couldn’t find a breakthrough as Dover caused the first big cup upset of this year’s Emirates FA Cup.


Southend United’s trip to Dover Athletic in the Emirates FA Cup First Round will be played on Sunday 10 November, 12.00pm kick-off.

Tickets for Sunday's trip to Kent to face National League side Dover Athletic are now on sale until 2.45pm on Saturday 9 November.

We are now able to offer supporters the opportunity to collect tickets on Sunday as well.

Two Southend United staff will be situated in and around the away turnstile area from 10.15am onwards.

You will need to have proof of ID to collect the tickets.

The Ticket Office will be open until 3pm on Saturday for supporters to come and collect tickets in advance, otherwise these will be sent to Dover to be collected.

Please note, tickets will not be on sale on Sunday - this is still an all ticket game.


We can confirm ticket prices for our Emirates FA Cup game away to Dover Athletic next month.