Blues are back on home soil this evening as they face Millwall at Roots Hall in their penultimate pre-season friendly – kick-off 7.30pm.

For Kevin Bond’s three summer signings – Brandon Goodship, Mark Milligan and Nathan Ralph – it will be their first taste of playing at Roots Hall and a chance to impress against Sky Bet Championship opposition. 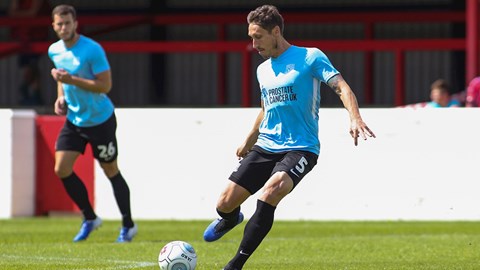 Millwall kick off their new season at home to Preston North End on the 3rd August and come into the game on the back a 2-1 win over Gillingham.

The Lions also have past Blues players within their ranks in Ryan Leonard, who will be hoping to get some minutes at his former home, as well as having Adam Barrett in the backroom staff and Neil Harris as the man in charge.

Simon Cox, Timothee Dieng and Jason Demetriou will miss out but Stephen McLaughlin, Dru Yearwood and Harry Lennon both trained ahead of the clash with Millwall and are fit to take part.

Millwall’s new signings will all be looking to get some more game time in hope to impress their manager Neil Harris so they can earn starting spots in the Championship season.

Millwall have also recently signed Republic of Ireland U21 captain Jayson Molumby on loan from Brighton & Hove Albion which was the club’s sixth summer signing and he may be making his first ever appearance in a Millwall shirt.

A quickfire double from Theo Robinson saw Southend beat Championship side Millwall in their latest pre-season friendly at Roots Hall.

Both sides found clear chances hard to come by in the opening 45 minutes with neither goalkeeper really tested in the blistering heat, with temperatures exceeding 30 degrees at kick-off.

Millwall’s Jiri Skalak had a half-chance blocked early on before Stephen McLaughlin had the first-half’s only shot on target which was claimed at the second attempt by goalkeeper Ryan Sandford.

Dru Yearwood and Stephen Humphrys both had efforts fly over the crossbar which were followed by attempts by Jed Wallace and Skalak which did likewise as the game remained goalless at the break.

Shortly after the restart though, the visitors took the lead in fortuitous circumstances as Nathan Ralph scored an own goal that he could do little, or knew little, about.

The full-back, who was making his first Roots Hall appearance since signing from Dundee, got in the way of a Harry Lennon clearance which looped over Mark Oxley and in off the underside of the bar.

After going in front three minutes into the second-half, Neil Harris’ side pushed for a second and former Blues favourite Ryan Leonard chanced his arm from distance only to fire over.

Millwall had looked the sharper after the interval, but Southend grew into the game as the sun dropped down behind the away end and they created a number of decent chances to level.

Mark Milligan hit a thunderous first-time strike that flew just over Sandford’s crossbar before substitute Luke Hyam done the same with a volley from inside the box.

Southend continued to press with Humphrys stabbing an effort on goal before Blues would find an equaliser with a quarter of an hour remaining through substitute Theo Robinson.

Robinson, who had been on the pitch no more than two minutes, picked the ball up on the edge of the area and rifled it into the top corner to put Southend on terms.

Three minutes later and the striker would grab his and Blues’ second as Kevin Bond’s side went in front thanks to a well-taken header from Robinson.

After Brandon Goodship’s shot was saved by Sandford, Goodship’s near-post corner picked out the head of his strike partner, who flicked the ball in at the near-post to win it for Southend.

Tickets for the pre-season friendly against Millwall on Wednesday 24 July (7:30pm kick-off) are on sale.

The Fairfield BMW East Stand and Paul Robinson Solicitors West Stand will be open to Southend supporters for this game.

Season Card holder’s seats will be reserved for a week and then will be released for general sale on Thursday 4 July.

The Captains Bar will be open for this game and will cost £20+vat which includes seating in the Director's Box and a pay bar facility.

For other hospitality offerings please enquire by emailing Commercial.