Blues are back at Roots Hall for the third time in eight days as they welcome Nigel Clough’s Burton Albion to Essex tomorrow afternoon.

Following defeats to Coventry and Gillingham, Southend will be desperate to end their week on a high as they go in search of vital points to help keep their survival hopes alive.

The Brewers, comfortably clear of the danger zone but 10 points off the top six, have been struggling of late but a win for the visitors could help them start off a late push for the play-off places.

Tuesday night’s defeat to Gillingham extended Southend’s losing run to four matches coming off the back of defeats to Blackpool, Peterborough and Coventry.

Blues have just the three league wins all season, with their last victory coming at the start of February where they beat Lincoln City 2-1 at Roots Hall.

Burton are without a win in their last six, losing two and drawing four, and they come into the weekend off the back of a 4-1 defeat to Ipswich Town at Portman Road.

Their recent record at Roots Hall is also unfavourable, having not won in their past five visits in all competitions, drawing two and losing three.

Blues picked up their first point under Sol Campbell with a 1-1 draw against Burton Albion at the Pirelli Stadium as Stephen McLaughlin’s goal was cancelled out by Scott Fraser’s free-kick.

McLaughlin headed the visitors in front before John-Joe O’Toole was sent off. Blues though couldn’t make their man advantage count as Fraser’s free-kick secured a point for the Brewers.

Patrik Gunnarsson is set to start in goal for Blues after joining on an emergency loan from Brentford following confirmation that Mark Oxley will be out for a number of weeks with a thigh injury.

Brandon Goodship was absent Tuesday night with an ankle injury and he’s pushing for a return as is Jason Demetriou who’s been rested for the last two matches.

Blues were boosted by the return of Joe Shaughnessy and Harry Kyprianou on Tuesday night, though they’ll continue to be without Stephen Humphrys, John White and Harry Lennon amongst others.

Despite the team’s poor recent form, there’s been one standout player for Burton in the last six games and that’s Rangers loanee Jamie Murphy who is certainly the one to watch on Saturday.

The 30-year-old midfielder has found a new lease of life at the Pirelli Stadium, scoring four goals and claiming one assist in his opening six appearances for Burton since joining on loan in January.

Team-mate John Brayford described Murphy as a “special player” in a recent interview and Burton will no doubt be looking to give him as much of the ball as possible at the weekend.

Craig Hicks will be in charge of his third Southend game of the season on Saturday, being assisted by Leigh Crowhurst and Stuart Butler, with Nigel Lugg in as the fourth official.

It’ll be Hicks’ first visit to Roots Hall since January 2019, having officiated Blues’ opening league game away to Coventry and their New Year’s Day game at AFC Wimbledon.

This season, Hicks has taken charge of 25 games, issuing 76 yellows and four reds, and was last seen in the middle of Portsmouth’s dramatic late Leasing.com Trophy win over Exeter on Tuesday.

Season Card (SC) holders can also take advantage of our second SC offer of the season as they can purchase an additional TWO tickets for the price of £5 each if purchased ahead of matchday.

Prices will be subject to their standard increase on matchday with tickets available right up until kick-off, and you can find out more information about ticket availability and pricing by clicking here.

Southend United were beaten 3-2 by Burton Albion at Roots Hall as their run of defeats was extended to five matches.

Burton came flying out of the blocks and took a deserved early lead through Lucas Akins’ cushioned volley that went in off the inside of Patrik Gunnarsson’s right-hand post.

Gunnarsson’s opposite number though was at fault for Blues’ equaliser as he punched into his own net after Sam Mantom’s volley had looped into the air from a deflection.

But Kieran O’Hara was bailed out by his fellow Burton players as Ryan Edwards would bundle the visitors back in front before Jamie Murphy capitalised on a mistake by Miles Mitchell-Nelson.

John-Joe O’Toole scored an own goal in stoppage time, but it was a first victory in seven for Burton as they make a late push for the top-six, while Southend’s misery continued.

Defeat on Tuesday night against Gillingham had extended Southend’s losing run to four matches and in an attempt to arrest the slide, Sol Campbell made two changes to his side for the visit of Burton.

In came Joe Shaughnessy – his first start since November – as well as goalkeeper Patrik Gunnarsson who only joined the club on an emergency loan from Brentford earlier in the week.

And it wasn’t long before the Icelander was picking the ball out of his net as Burton capitalised on a bright start by opening the scoring inside the first five minutes through Lucas Akins.

Full back Colin Daniels found space on the left to whip in a cross towards Akins who cushioned the ball back across goal on the volley, seeing his effort going in off the inside of the post.

It was a perfect start for the Brewers who’d come into the game on a six-game winless run but Blues went close to cancelling out their early advantage when Sam Mantom glanced a header just wide.

The two sides exchanged further chances with Oliver Sarkic forcing a fingertip save out of Gunnarsson before Stephen McLaughin had a headed chance easily saved by Kieran O’Hara.

Southend then saw a glorious chance go begging when Mantom hit the post before Charlie Kelman’s follow-up was blocked before Blues were gifted the most fortuitous of equalisers.

McLaughlin picked out Mantom whose volley looped up into the air off a Burton defender. Inexplicably, O’Hara chose to punch rather than catch the ball only to punch it into his own net.

It was Blues’ first goal since McLaughlin’s brilliant strike against Blackpool two weeks ago and the two goals couldn’t have been more contrasting as the two sides went into the break level.

Much like the first half, however, Burton would restore their lead within five minutes of the restart as Ryan Edwards bundled the ball across the line to put Nigel Clough’s side back in front.

A teasing cross from Joe Powell hit Joe Shaughnessy and looked destined for the back of his own net before Edwards piled in to force it over the line despite the best efforts from Blues’ defence.

Southend were facing a fifth straight league defeat though Kelman had a half-chance come and go when he got on the end of a McLaughlin cross only to head well wide of the target.

Elvis Bwomono also tried his luck from distance with a dipping shot that flew just over the crossbar but Burton would all but seal their first win in seven after a mistake but Miles Mitchell-Nelson.

The young defender tried playing out from the back only to pass the ball straight to Nathan Broadhead who teed up Jamie Murphy who fired in his fifth goal in seven matches for the Brewers.

Murphy’s strike had all but wrapped up the points for the visitors, but Mark Milligan did have a chance to make the final few minutes interesting, forcing a superb reaction save out of O’Hara.

And Southend did give themselves some late hope when Sam Barratt’s long throw was flicked into his own net by John-Joe O’Toole in the first minute of stoppage time.

Blues threw everything forward to nick an unlikely equaliser but couldn’t grab a third goal as they ended a week of three successive home games without picking up a point.

Tickets for our home game against Burton Albion are now on general sale and for this game we are rolling out our second Season Card (SC) holder offer of the season.

Back in November our loyal SC holders were offered a complimentary ticket to bring a friend or family member to the Oxford United game.

And when Nigel Clough’s Brewers come to town on Saturday 22 February, at the back end of a busy stretch of three consecutive home games, SC holders can purchase up to an additional TWO tickets for the price of just £5 each.

This offer is only available in advance of the matchday and can be redeemed in three ways. Either in person or over the phone (08444 770077) at the Box Office, or online.

How to purchase online

It's important to note the offer is for up to two tickets at £5 each per SC holder.

To take advantage of the offer online, all supporters need to do once logged on is select however many additional tickets they require. Once in the basket the system will automatically reduce the total up to the two applicable per SC holder.

If supporters wish to use multiple SCs, this cannot be done together in one transaction. They will need to complete each transaction on the relevant SC number, log off and log back in with the next SC holder details in order to process the offer. 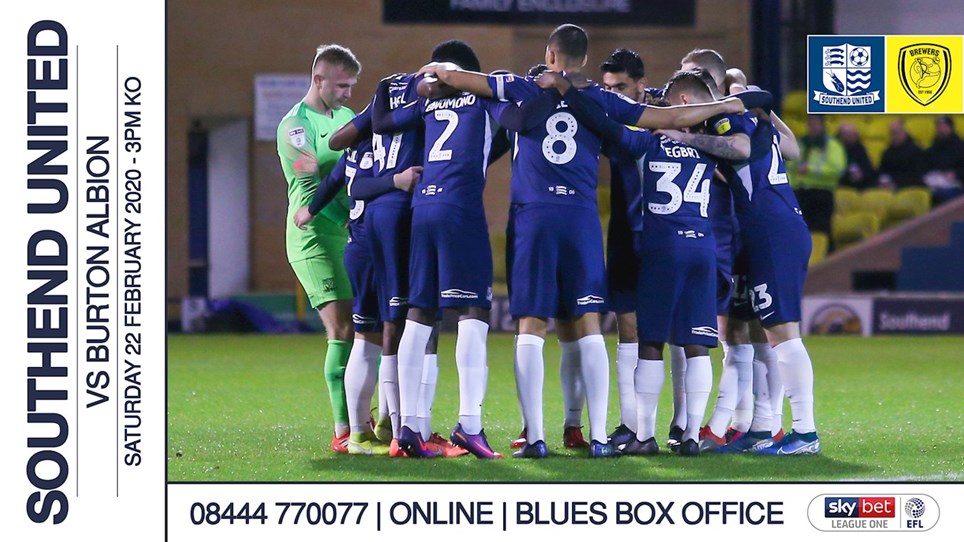