Blues entertain MK Dons this evening at Roots Hall hoping to put their league woes behind them and reach the Round Three of the Carabao Cup for the first time since 2007.

Southend advanced to the second round for the first time in almost a decade with a come-from-behind 2-1 win over League Two side Stevenage at the Lamex Stadium.

Their opponents MK Dons progressed by an even narrower margin after drawing 2-2 on the night with AFC Wimbledon, they reached round two by virtue of winning the penalty shootout 4-2.

Southend’s form going into this game has been far from ideal with Blues yet to pick up a point from their five league games, with the first round of the Carabao Cup producing their only win to date.

Blues looked destined to pick up their first league win of the season at Wycombe at the weekend but two late goals from the Chairboys meant Southend are still to get off the mark in the league.

Dons have picked up two wins for their opening four league games, however, they were on the wrong end of a battering at the weekend, losing 4-0 to Peterborough at Stadium:MK.

Blues blew away a sorry MK Dons side whose relegation to League Two was all but confirmed following a 4-0 defeat to Southend at Roots Hall with Theo Robinson grabbing a hat-trick.

Robinson scored twice in eight minutes to put Blues in control. Stephen McLaughlin sealed the points with a neat flicked finish before Robinson completed his hat-trick with a tap-in.

Kevin Bond may look to tonight as an opportunity to freshen up his side after a number of players look visibly exhausted towards the end of the defeat to Wycombe on Saturday in testing conditions.

Youngster’s Isaac Hutchinson and Charlie Kelman, who scored both goals in Southend’s first round win, weren’t part of the 18 at the weekend so they’ll be looking to feature tonight.

Defenders Jason Demetriou and Liam Ridgewell are available after playing in an u23 game last Friday, while Rob Kiernan is also an option at the back having been an unused sub at Adams Park.

Striker Kieran Agard will most likely pose the biggest threat to the Southend backline this evening having been MK’s leading goal scorer in last season’s promotion-winning campaign.

Agard joined Dons in 2016 for a then club-record fee and rifled in 22 goals in all competitions last term which included a spell of scoring six times in seven matches across November and December.

And the frontman has previous against Southend, scoring against Blues at Stadium:MK the last time to two teams met there, converting from the spot to earn a 1-1 draw.

Referee for tonight’s Carabao Cup encounter will be Neil Hair who last took charge of at Roots Hall in December when Rochdale, this coming weekend’s visitors, won 2-1 the weekend before Christmas.

This is Hair’s second full season in the Football League after being promoted from the National League shortly after taking charge of the play-off final between Tranmere and Boreham Wood.

So far this campaign, Hair has taken charge of four matches and has shown 11 yellows, but is yet to show a red, and last time out was at Gillingham for their 2-2 draw against Blackpool.

Tickets are available to purchase from the Blues Box Office, online or by calling 08444 770077 and are at a discounted price to the standard league prices.

You will be able to purchase tickets right up until kick-off and you can find out more information about ticket availability and pricing by clicking here.

Brandon Goodship’s first goal at Roots Hall wasn’t enough to prevent Southend from exiting the Carabao Cup at the second round stage following a 4-1 defeat to MK Dons.

The Dons looked the most threatening in the early stages of the contest with goalkeeper Nathan Bishop tested a handful of times in the opening 10 minutes by the visitors.

Bishop needed to have his wits about him after fumbling Jordan Bowery’s snap-shot, quickly getting back up to dive at the feet of Kieran Agard who was coming in to score the rebound.

Rhys Healey then made Bishop punch a vicious shot at his near-post before Healey had a headed chance that he will feel he should have done better with, heading well wide.

Alex Gilbey continued the pressure with a shot that was pushed away by Bishop before Agard had another shot well blocked inside the box in a frantic opening quarter of the game for the visitors.

Southend found their feet as the game reached the midway point of the half and Simon Cox was denied a superb opening goal as his left-footed effort was brilliantly tipped away by Stuart Moore.

But any momentum Blues had was quickly swept away as Dons took the lead after the half-hour mark as Agard teed up Healey who calmly found the bottom corner to put Dons 1-0 up.

Blues’ problems would deepen further before half-time as Paul Tisdale’s side would double their advantage with a fantastic strike from Callum Brittain that kissed the crossbar on its way in.

Coming out for the second-half, Southend knew they had to get the next goal if they were to have any chance of staying in the contest and they got one back almost immediately after the restart.

A counter-attack down the right ended with Stephen Humphrys drilling a cross-come-shot across the face of goal which was tapped in by Goodship to put Blues back in the tie.

That goal from Goodship, his first at Roots Hall since joining in the summer, lifted the Roots Hall crowd who were now roaring their side on as they went in search of an equaliser.

And Kevin Bond’s team kept pushing forward, with Ethan Hamilton effort cleared off the line by Joe Walsh before Humphrys saw his header go narrowly over the crossbar from the resulting corner.

MK Dons though ended any hope of a comeback with suckerpunch goal with less than 10 minutes remaining, with sub Hiram Boateng weaving his way into the box before firing in.

And the visitor’s passage into the third round was completed in injury-time as Dons added gloss to the score line as another sub, Sam Nombe, added a fourth with a power effort.

Blues face MK Dons this coming Saturday and tickets for the game will come off sale from the Blues Box Office on Friday at midday.

Tickets will be available to purchase on the day of the game with no price increase, cash only. These are to be brought from the Away Ticket Booth next to Gate 3, any collections will also be from here.

Ticket prices for the encounter are as follows:

*Under 12 tickets are FREE of charge with a paying adult ticket only. Please note these tickets are only available via the Ticket Office.

We have five pairs of wheelchair spaces available for this fixture, which can be purchased by visiting the Blues Box Office.

MK Dons travel information can be found by clicking here. 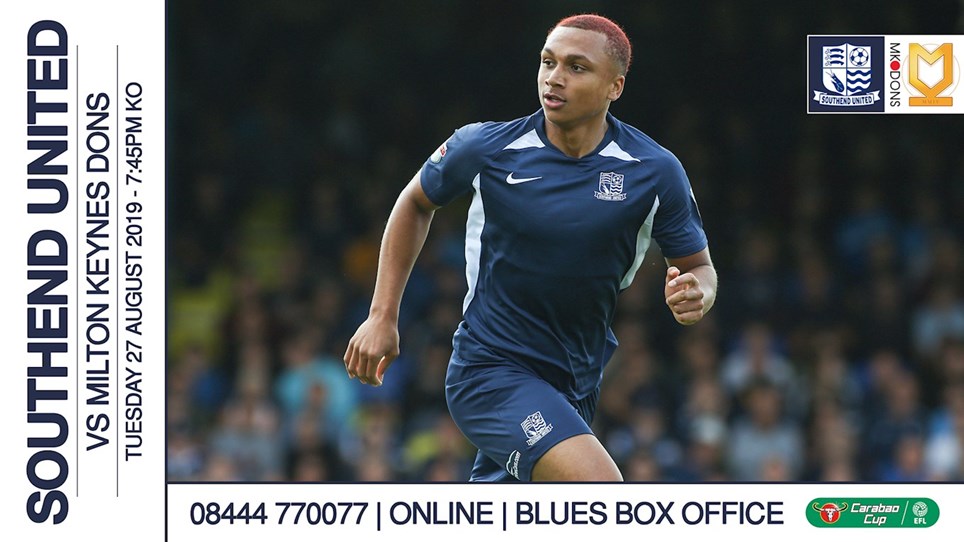