Southend United open their League One campaign with a trip to the St. Andrew’s Trillion Trophy stadium as Blues start their season off against the Sky Blues of Coventry City tomorrow afternoon.

Birmingham City will play host to Mark Robins’ side this season after Coventry were forced out of their Ricoh Arena ground over the summer and into a ground share with the Championship club.

So, it’ll be unfamiliar surroundings for all come Saturday afternoon with both sides eyeing up the best possible start to their 2019/20 campaign.

You can never take pre-season results too seriously, but Blues had mixed results over the course of July with two wins, three draws and two defeats in their seven warm-up matches.

Kevin Bond’s side though finished preparations for the new season on a high with a win against Championship side Millwall followed by a draw against League One rivals Gillingham.

Coventry had a slimmer pre-season schedule compared to Blues with just the five matches played, losing just the one against Huddersfield with two draws and two wins rounding off pre-season.

Jordy Hiwula’s solitary goal early in the second-half was all that separated Coventry and Blues when the two sides last met back in December at the Ricoh Arena.

Tom Bayliss’ defence-splitting pass in the 55th minute found the run of Hiwula who calmly slotted the ball beyond Nathan Bishop to secure a league double over Southend.

Australian Mark Milligan will mark his full debut by leading the Blues out on Saturday after the midfielder was named Southend club captain for the upcoming season.

Joe Shaughnessy is hopeful of receiving international clearance in time to make his debut after signing yesterday with fellow new boys Brandon Goodship and Nathan Ralph in line for debuts also. Liam Ridgewell is unlikely to be available, though, after only completing a move on Friday morning.

Kevin Bond will be without the experienced Simon Cox who hasn’t kicked a ball in anger all pre-season thanks to a calf injury, with defender Rob Kiernan also missing out with an ankle problem.

Wesley Jobello has been turning a few heads in pre-season after signing for Coventry from French Second Division side Ajaccio in the summer.

Jobello has been looking impressive on both flanks and looks to offer a real threat with his crosses which is something Blues will need to be very wary of on Saturday.

As part of a front three, the Frenchman has impressed in the warm-up matches ahead of the season and will be one to keep an eye on at St. Andrews.

In a weird twist of fate, Craig Hicks will take charge tomorrow having been the man in the middle of Southend’s opening game last season against Doncaster Rovers.

He’ll be assisted by David Plowright and Craig Taylor, with Richard Morris on hand as fourth official.

Southend fans will be housed in the lower tier of the Gil Merrick stand at St. Andrews, which is located behind the goal to the right of the player's tunnel and dugouts.

The stand generally has a capacity of 3,000 which can be increased to 4,500 depending on demand, with the stadium as a whole capable of holding over 30,000 fans.

For more information on St. Andrews, including where to park, travel directions and where to go for a pre-match drink, check out awaygames.co.uk’s guide by clicking here.

We’re on course to have over 1,000 Southend fans making the trip to Birmingham to roar the Blue boys on as they start their League One campaign, with 780+ tickets pre-sold.

Tickets for the game go off pre-sale at midday but they are still available to purchase on the day of the game from the turnstiles at St. Andrews with no matchday increase in price.

Those who have purchased tickets already can collect them from the Kop Main Stand reception. If you wish to pay on the day, turnstiles will be open at 1.30pm and are cash only.

Blues began their 2019/20 campaign with a 1-0 defeat against Coventry City with Zain Westbrooke’s strike early in the second-half the difference at St. Andrew’s Trillion Trophy Stadium.

Coventry had the better of the opening 45 minutes with chances falling to Jordan Shipley and Wesley Jobello before Jordy Hiwula had an effort superbly cleared off the line by Harry Lennon.

Mark Robins’ side then took the lead early after the restart when Westbrooke fired in a low strike from outside the area and into the bottom corner to give Coventry the lead.

Stephen Humphrys then saw his header crash against the face of the crossbar as Blues continued to push for an equaliser but it wasn’t to be for Blues who began their campaign with a defeat.

It wasn’t the start to the season that Kevin Bond would have wanted for his side but he’ll take plenty of encouragement away from the afternoon, despite the result.

Ahead of the game, Bond handed four Southend players their full debuts with Mark Milligan skippering the side alongside fellow new boys Joe Shaughnessy, Nathan Ralph and Brandon Goodship.

Theo Robinson spearheaded the attack for Blues at St. Andrew’s but the visitors found it tough to create any clear opportunities in front of the Sky Blues goal in the opening 45 minutes.

Coventry, on the other hand, made a much brighter start and Mark Robins’ side went close inside six minutes when Jordan Shipley opened his body up, clipping the outside of the post with his strike.

After a well-publicised dispute with the owners of the Ricoh Arena, Coventry were in unfamiliar surroundings at the home of Birmingham City but they looked the more settled going forward.

Wesley Jobello had a half-chance when he was found by a clipped ball over the top, only to stab just wide, before Coventry had by far their best chance of the game midway through the first-half.

A heavy touch from Shaugnessy allowed Jordy Hiwula to go clean through on goal, rounding Mark Oxley before shooting, but Harry Lennon done superbly well to get back and clear off the goal line.

That was how it would remain at the interval, but it wasn’t long after that Coventry would open the scoring with Zain Westbrooke scoring his first goal for the Sky Blues.

A crossfield pass from Amadou Bakayoko found the run of Westbrooke, who lined it up and rifled a low strike into the bottom corner to give the ‘home’ side the lead after 51 minutes.

Having done the league double over Blues last season, Coventry went close to putting daylight between the two sides when Shipley whipped a dangerous cross into the penalty area.

The ball in was just missed by Hiwula before cannoning off Jobello and going towards goal, but Oxley showed great reactions to get across his line and palm the ball away to safety.

Southend continued to be frustrated in the final third, so Bond made a double change with Stephen Humphrys and Simon Cox being introduced with Humphrys immediately looking threatening.

And Blues would see their best chance of the game so far come and go with a little over 10 minutes remaining when Shaughnessy was found inside the penalty area.

Isaac Hutchinson’s dinked ball into the box found the centre-back completely unmarked, but he put his header agonisingly wide when anything on target was likely to have been the equaliser.

Cries of “yellows, yellows” from over 1,000 travelling fans urged the visitors forward and Ralph was denied by a brilliant fingertip save from Marko Marosi to tip over the full-back’s header.

Southend continued to throw everything forward looking for an equaliser and Humphrys had another headed chance come crashing off the face of the crossbar with time running out.

But, try as they might, the visitors couldn’t break down the Coventry defences and nick an equaliser their second-half display had deserved as they began the new league season with a defeat.

Tickets for Blues' first game of the 2019/20 season are on sale until midday on Friday.

Prices are as follows:

Wheelchair and Carer tickets are also only available from the Box Office in person due to the phone lines.

Tickets will be available on the day - cash sales only on turnstiles from 1.30pm. There's no price increase on the day. Collections will be from the Kop Main Stand reception.

Away travel information for supporters can be found here.

Purchase your tickets online or from the Roots Hall ticket office (9.30am-5pm). 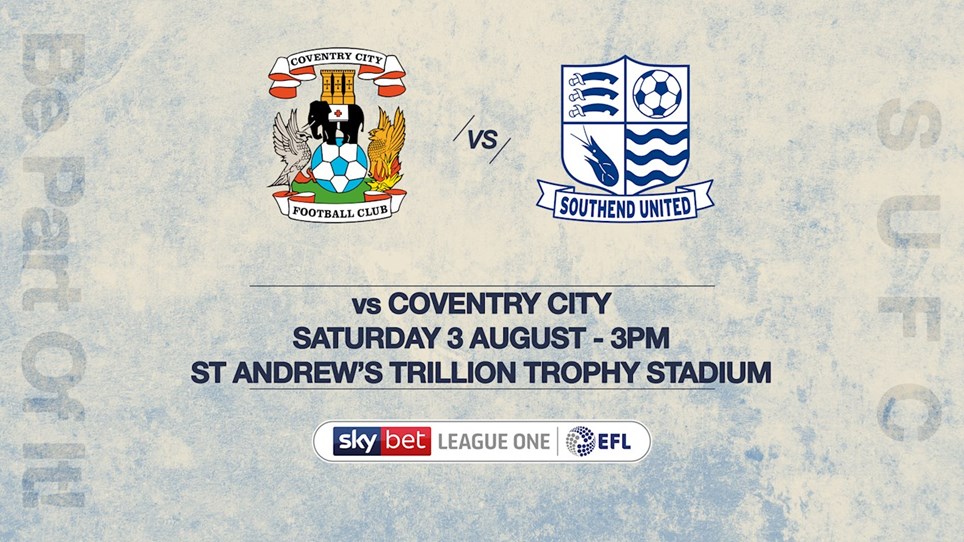 
Please note we are awaiting to receive the away ticket stock for our opening Sky Bet League One fixture against Coventry City at the St. Andrew's Trillion Trophy Stadium on Saturday 3rd August.