Tuesday night’s 3-0 win over Walsall will send Southend to the North East to face Sunderland in confident mood.

They will know, though, how tough the task that is in store for them at the Stadium of Light against a former Premier League side just two seasons ago.

Jack Ross’ Black Cats have won three on the bounce and are currently third in the Sky Bet League One table, so themselves will be expecting to keep the pressure on the top two.

Blues will be playing in front of an expected crowd of around 30,000, but having only lost once in their last seven, Chris Powell will be hopeful of keeping their good form on the road up, winning their last three away from Roots Hall.

Blues will be without Harry Lennon after he fractured his leg against Walsall, and top goalscorer Tom Hopper is doubtful.

Hopper had to be withdrawn with a knee injury in the first half of Tuesday’s 3-0 over Walsall and was due to have a scan on Thursday.

Luke Hyam is back in full training but won’t be available with Chris Powell saying he needs to get some minutes under his belt before making a return.

Jack Ross is hoping to have Josh Maja available once again this Saturday.

Elsewhere, Bryan Oviedo will be in the squad to face Southend United after serving his three-game ban while Glenn Loovens returned to training today (Thursday) but won’t be ready in time for this weekend. 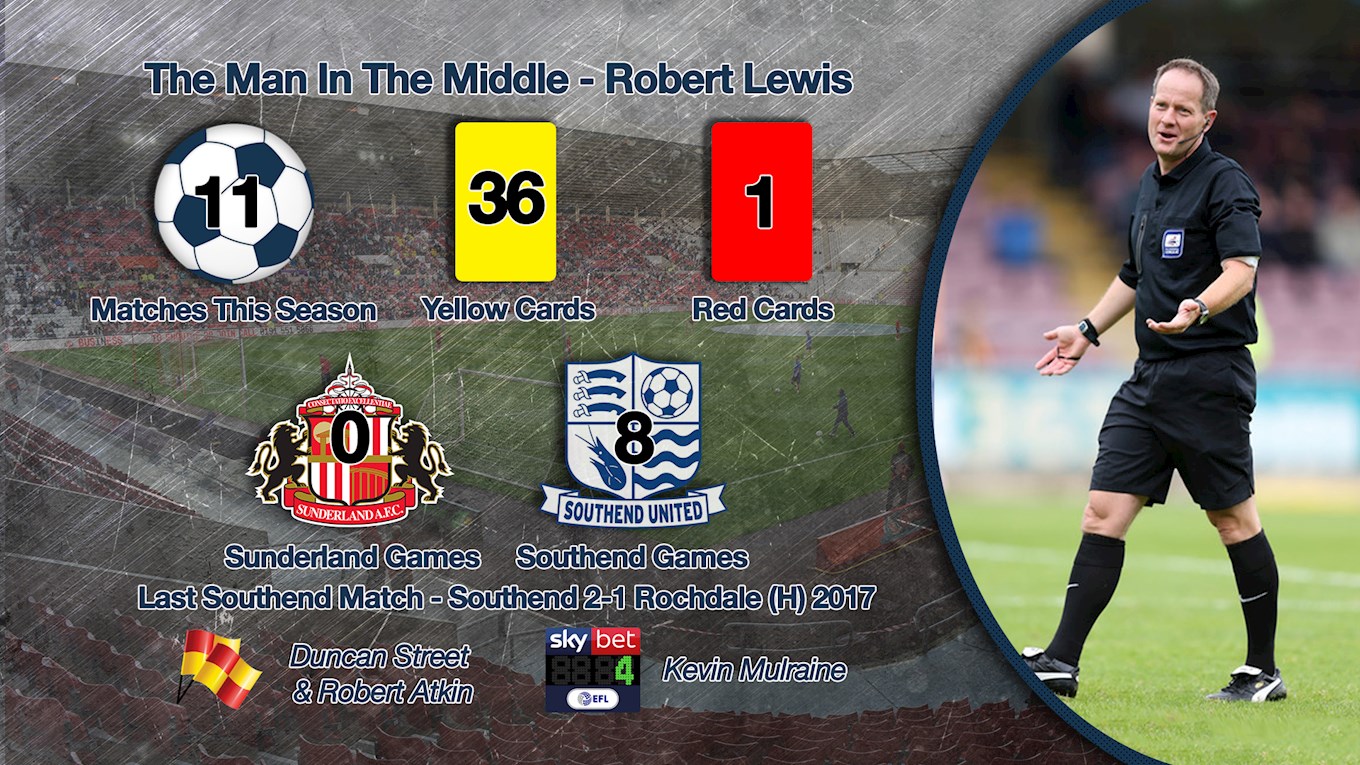 “It was a good display on Tuesday so we’ve got to take confidence from that and what we’ve done on the road.

“It’s another test for us and one we know that will be tricky, but actually it’s a game that should inspire us.

“We’re going to a place which has seen Premier League football. They’re trying to re-build themselves as a football club but as I say to the players bring it on and let’s get on with it.”

“Now we have put together this run in recent weeks and this record since the start of the season – we don’t want to give up these things lightly.

“We have another challenging fixture on Saturday. Just because we are at home it doesn’t make it easier than the ones we have faced.

“Southend’s form has been very good in terms of the last six games, so we know it is a tough match. Every team that has come to the Stadium of Light has produced good performances as well, so we know we have to play well to win the game.”

Tickets are now only available from Sunderland on the day. Any tickets not collected will be taken to Sunderland to collect on the day.

At approximately 2.40pm, soldiers from the 5th Regiment Royal Artillery will undertake a parade around the Stadium of Light pitch and the club is asking as many supporters as possible to be in their seats to show their appreciation to the soldiers, many of whom are Sunderland fans.

The teams will then take to the field slightly earlier than usual, as Staff Sergeant Chris Gee from 5th Royal Artillery lays a poppy wreath in the centre-circle and players and supporters of both clubs gather to observe a traditional period of silence prior to kick off.

Supporters are also advised that concourse bars will close slightly earlier, in order for the silence to be observed in the appropriate manner.

Southend were unable to halt Sunderland’s momentum as they fell to a 3-0 defeat at the Stadium of Light thanks to goals from George Honeyman, Chris Maguire and Aiden McGeady.

Both sides created chances early but the game suddenly came to a halt when Ben Coker went down with a serious looking knee injury which required him to leave the field on a stretcher.

After the stoppage, Sunderland would go on to break the deadlock through Honeyman, whose glancing header sneaked in at Mark Oxley’s far-post just before the half-hour mark.

Southend had chances to level before the interval but couldn’t take advantage and they went into the break furious at not being given a penalty for a foul on Dru Yearwood.

And after the break, Sunderland would capitalise on that frustration with a thunderous strike from Maguire, that left Oxley with no chance, doubling the home side’s advantage.

Try as they might, Blues couldn’t get a goal back to start any sort of comeback, with Sam Mantom’s close-range header – which was well saved by Jon McLaughlin – the best they could muster.

Sunderland would then wrap up the points with 10 minutes remaining when substitute Aiden McGeady carried the ball forward and fired beyond Oxley to secure the Black Cats' fourth straight win.

That fourth maximum in a row for Jack Ross’ side kept them within touching distance at the top while Southend slipped the 11th in the table ahead of another tough trip to Barnsley next week.

It was always going to be a tough ask for Chris Powell’s Blues against a Sunderland side who just two seasons ago were playing in the Premier League.

But Southend would have travelled to the Stadium of Light with some confidence having won five of their last seven league games, including Tuesday night’s 3-0 defeat of Walsall at Roots Hall.

Following the win against the Saddlers, Blues made two enforced changes with injuries to Tom Hopper and Harry Lennon meaning they missed out, leaving Simon Cox and former Sunderland defender Michael Turner to come in for Southend.

Sunderland came into the game off the back of three straight away wins in the league and were riding high near the top of the table, and in front of another 30,000-plus crowd at the Stadium of Light they made a bright start.

Mark Oxley had to be at his best as early as the third minute when Jerome Sinclair was picked out by a left-wing cross. The Black Cats number 17 got a header in at the near-post which looked to have the beating of Oxley but the Blues keeper stretched a right-hand out to tip it away superbly.

After that early scare, Blues started to grow into the game and carved out a good chance through Dru Yearwood who shot over from a corner before Taylor Moore got on the end of a Sam Mantom free-kick to head wide.

But Blues’ momentum was suddenly curtailed by a freak injury to Ben Coker who had to be taken off on a stretcher after appearing to badly twist his knee. After a simple clearance to touch, the full-back screamed in agony as soon as his foot landed and with that his game came to an end.

After a long stoppage in play to attend to Coker, Sunderland regained the impetus in the match and their pressure would tell just before the half-hour mark when they opened the scoring through the head of their captain, George Honeyman.

The Black Cats skipper was picked out inside the area by a right-wing cross from Lynden Gooch, with Honeyman expertly glancing his header across the face of goal and inside the far post to give the home side the lead.

Sunderland’s lead was arguably deserved on the balance of play, but Chris Powell’s side almost responded immediately. Harry Bunn carried the ball through a couple of challenges to force a smart save from Jon McLaughlin before Simon Cox shot over from the follow-up.

Southend continued to push and would end the half strongly, and they had a clear shout for a penalty go a begging when Yearwood barrelled his way into the penalty area before being brought down by Tom Flanagan, but the referee waved the protests away as Sunderland went into the break 1-0 up.

Blues knew that the next goal would be pivotal if they were to get anything out of their trip to the North East but they fell further behind early in the second-half following a wonder-strike from Chris Maguire that doubled Sunderland’s advantage.

A loose pass from Moore was picked off by Maguire 30-yards from goal, allowing the Black Cats number seven to carry the ball forward and fire into the top corner, leaving Oxley no chance and leaving Blues with a proverbial mountain to climb.

It just looked like it wasn’t going to be Southend’s day when Sunderland ‘keeper McLaughlin pulled off a smart reflex save to deny Sam Mantom from halving the deficit with a close-range header, with the ball not falling quickly enough for Cox to put the rebound away.

And Blues’ fight was all but extinguished with little over 10-minutes remaining as Sunderland increased their lead to three. Aiden McGeady, on as a sub, picked the ball up outside the area before firing past Oxley for Sunderland’s third, wrapping up another three points for the Black Cats.

Tickets for Blues' Sky Bet League One trip to Sunderland on Saturday 27th October are on general sale.

We have been issued an allocation of 1,500 tickets which are situated in the North Stand Upper, tier 3, including 6 pairs of wheelchair and carer tickets.

As of Wednesday morning we had sold 950 tickets for the game at the Stadium of Light.

Both sides got wins in midweek, the Black Cats winning their last three while Blues have lost once in the last seven.

Tickets will come off sale from the Blues Box Office at 5pm on Thursday. Any tickets not collected by this time will be taken to Sunderland to collect on the day.

Prices are as follows:

Disabled tickets are priced at the age-related category with a carer free of charge.

Sunderland travel information can be found by clicking here.