Southend’s battle for survival comes to a head tomorrow afternoon as they host Sunderland at Roots Hall knowing that a win will secure their League One status.

With Plymouth and Scunthorpe playing each other, Blues know a defeat will see them go down while a draw is only good enough if Argyle and the Iron draw also and Walsall fail to win.

Sunderland travel to Essex having lost the chance of gaining automatic promotion thanks to their midweek defeat to Fleetwood, but the Black Cats still have plenty to play for ahead of the play-offs.

Jack Ross’ side will at least want to maintain home advantage in the 2nd leg by finishing fourth, however, finishing third could give them a potentially easier tie against the team finishing sixth.

Defender Elvis Bwomono and midfielder Timothee Dieng are in line to make their 50th appearances for Blues this weekend if selected against the Black Cats.

Harry Bunn is an injury doubt for Saturday having picked up a calf problem against Rochdale, as is Luke Hyam who was replaced after little over 10 minutes against the Dale with a hamstring problem.

Harry Lennon is expected to be back in training this week while a lack of striking options may force Kevin Bond to bring in Stephen Humphrys who’s missed the last few games due to a lack of fitness.

Sunderland have “two or three concerns” following Tuesday night’s defeat to Fleetwood but they expect Aiden McGeady to be unavailable as he continues his recovery from a broken foot.

Striker Charlie Wyke returned to training this week having missed the last two games as Jack Ross prepares to potentially rest a number of players ahead of the play-offs.

“We’ve turned in some good performances in the time that I’ve been here and we should have more points than we’ve got, for various reasons, which would make the situation a little bit different.

“It is difficult to come in and change that momentum quickly enough, but the lads are in good spirits and there are no long faces. No one’s walking around here with impending doom.

“Everyone’s fine and we’ll meet the game head on and try as best we can to take the game to Sunderland.

“They’re a good team, which is why they are where they are, so there’s no taking away from that it’ll be a difficult game and they’ve got a lot to play for going forward, but so have we.”

“We would never not treat the game properly because it’s obviously fairly significant for Southend and those other teams that are around them.

“Secondly, we want to try and finish the season with a win and thirdly there’s the incentive of confirming where we finish in the league and whether we play home or away first.

“There’s a lot at stake in terms of the game and that’ll be reflected in our selection. We’ll treat this as if we need to go there and win the game.”

This game is very close to a sell-out and therefore tickets are extremely limited.

We would like to thank all Southend United fans for their tremendous support this season!

Stephen Humphrys came off the bench to save Southend United from relegation as his goal three minutes from time secured Blues a 2-1 win over Sunderland and kept them in League One.

Blues looked to have been down and out when Chris Maguire levelled from the penalty spot with 15 minutes remaining, cancelling out John White’s overhead kick just before the break.

But Southend would claim survival in dramatic fashion as a loose ball inside the penalty area fell to Humphrys who was the calmest person in the ground, sliding the ball in to the spark jubilant scenes.

Had Humphrys not had grabbed the goal, Southend would have been down by virtue of Plymouth’s 3-2 win over Scunthorpe, but Blues can now look forward to another season in League One.

The full-time whistle sparked celebratory scenes, as well as a pitch invasion from the Blues fans, as Southend toasted the end to a dramatic campaign.

Regardless of what was happening elsewhere in the league, Blues went into this game knowing a win would be enough to keep them up and Southend made a bright start to proceedings, seeing Sam Mantom’s effort blocked from a well-worked corner inside three minutes.

Kevin Bond’s side then had two glorious chances to take the lead fall to youth product Dru Yearwood, firstly bursting through the Black Cats backline to be one-on-one with Jon McLaughlin only for the Sunderland ‘keeper to spread himself well to make the save.

Moments later and Yearwood had another great chance to grab his first goal for the club when he was found by a low Mantom ball into the area, but the teenage midfielder failed to connect properly with his strike as it was sliced well wide.

Sunderland’s chances of automatic promotion had gone with defeat at Fleetwood in midweek, but they still had play-off positions to play for and the advantage of a home 2nd leg and they went close to opening the scoring when Chris Maguire cut onto his left foot inside the box but hit the side netting.

Having failed to find the target from close range, Maguire tried again from distance but Mark Oxley was equal to it. Sunderland then had a great chance to score on the counter-attack as Lynden Gooch found acres of space on the left but he chose to cross, finding no one, rather than shoot.

With Plymouth winning at Scunthorpe, Blues were in the relegation places heading towards the interval, but Southend grabbed themselves a huge goal before the half-time whistle went as John White scored with two minutes of the first-half remaining to give Blues the lead.

Stephen McLaughlin’s corner was headed up into the air by Rob Kiernan with the bouncing ball finding its way to White about eight yards out, with the defender putting the ball beyond the Black Cats’ goalkeeper with a spectacular overhead kick to send a packed-out Roots Hall wild.

After the interval, both sides had a couple of free-kick opportunities go begging, with Maguire hitting the wall from 20-yards out before Southend’s McLaughlin tried fooling his namesake McLaughlin in goal by going for the near-post with a wide free-kick only to hit the side netting.

Sunderland had a couple of further set-piece opportunities as they pushed for an equaliser as news came through that Scunthorpe had equalised against Plymouth meaning, as things stood, a draw would have been enough for Southend to survive with Walsall also drawing at Shrewsbury.

Blues though weren’t interested in holding out for a draw and as the heavens opened, Southend had to weather a storm of their own from Sunderland as Jack Ross’ side continued to push and push for a leveller in front of almost 2,500 of their travelling fans.

Southend’s fans though continued to sing as loud as they could to spur the team on but Sunderland kept coming at the home side and went close with another set piece which was rolled across to their captain Grant Leadbitter who fizzed a low shot just wide of Oxley’s right-hand post.

With little under 15 minutes remaining though Sunderland were awarded a penalty by referee Darren Bond after Charlie Wyke broke through and got into the penalty area only to be brought down by a shove by White.

Maguire took the resulting spot-kick and, despite Oxley going the right way, the Sunderland man squeezed the ball into the back of the net to equalise. The equaliser, combined with Plymouth retaking the lead against Scunthorpe, meant Blues were back inside the relegation zone.

Stephen Humphrys was Bond’s final throw of the dice as the striker was brought on to replace Taylor Moore and the man with the mask put himself in Southend folklore by putting Blues back in front with less than three minutes remaining.

A speculative ball into the box bounced around and while Cox vigorously appealed for a penalty the ball came loose and fell to Humphrys who had the calmness to slide the ball beyond the advancing McLaughlin and put Southend within touching distance of survival.

Six minutes added time were shown but the clock went way beyond that after lengthy treatment was given to White for a head injury but the final whistle from referee Bond was greeted by a thunderous ovation from the majority of the near 11,000 in attendance at Roots Hall.

Southend had survived and Humphrys, thrown in as a last resort by Bond, wrote his name in Blues history as Southend remained in the third tier for another season.

This looks set to be a cracking last game of the season with plenty for both sides still to play for at the top and bottom of Sky Bet League One.

Roots Hall is selling fast and below is a ticket availability update, we would highly recommend purchasing in advance to avoid missing out.

Please note that due to the location of the Sky Sports cameras at Roots Hall we are unable to release any more tickets.

Please note if you’re collecting tickets for the fixture these will be available to collect from the North East ticket collection point from 3pm.

If you’re wishing to collect beforehand these will be available from the main Blues Box Office.

If you wish to collect your tickets from the Paul Robinson West Stand you need to request this in advance with the ticket office.

There will be no cash sales on the day from the Paul Robinson West Stand, tickets will only be available for purchase from the Blues Box Office from midday on Saturday subject to availability. 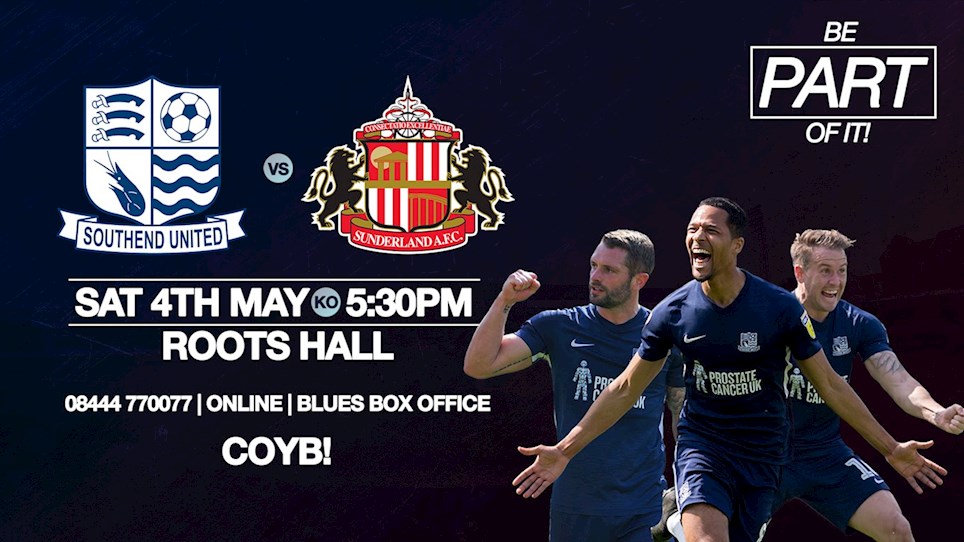