Blues are back in front of the Sky Sports cameras for the second home game in a row as they entertain Barnsley at Roots Hall tomorrow afternoon.

Last time out at home, Southend engineered a scarcely believable comeback against Portsmouth and Blues will hope to end their six-game winless run by going one better against the Tykes.

To do so they’ll need to put a dent in Barnsley’s push for automatic promotion, with the visitors currently on a 14-game unbeaten run in the league which stretches back to December.

And if Barnsley are to keep pace with Luton at the summit and keep Sunderland at bay below, they will need to complete a hat-trick of victories against Chris Powell’s side this season.

Chris Powell is waiting to hear the extent of the damage caused to striker Stephen Humphrys after he suffered a series of facial injuries in last weekend’s draw against Accrington.

Luke Hyam, Harry Bunn and Rob Kiernan all played 60-minutes in midweek for the u23s so will be pushing for a place in the squad, while Michael Kightly also returned to training in midweek.

Barnsley received a huge blow this week as top scorer Kieffer Moore was ruled out for the rest of the season, having not played since picking up a concussion against Gillingham three weeks ago.

In-form Cauley Woodrow though has been an able deputy for Moore, scoring five goals in his last seven matches. Defender Ben Williams is the Tykes’ only other injury absentee.

“Our last home game was against one of the sides up there and what a turnaround that was. I’m sure most people in the position we were in would have felt that it was game over, but the attitude and never-say-die spirit was terrific.

“We need that again from the start. I don’t think we need to be in that position too often that we were in against Portsmouth, but it was brilliant for us and good for the mindset.

“We know now when facing someone like Barnsley we have to be ready from the start and really get going. We don’t need scares like we’ve had to get ourselves going, because ultimately you can’t keep doing it.”

“They’ve clearly got resilience and outstanding individuals in terms of Cox, who is a wily old pro, you’d call him now – I know he’s had a bit of fun on Twitter about that with a Sky Sports presenter.

“He’s a class act, especially for this level, and it’s been demonstrated with his goals and assists and he’s an integral part of their team.

“The position they are in the table I think, given a fully fit squad, they wouldn’t be there; the squad that they have got is capable of being in the play-offs, in my opinion. I think they’ve been unfortunate with circumstances in their squad this year.”

Southend were unable to make their man advantage count as the 10-men of Barnsley won 3-0 at Roots Hall with goals from Cameron McGeehan, Cauley Woodrow and Jordan Green.

In a quiet opening to the game, Barnsley had the better of the chances, but the game was swung in Blues’ favour when Jacob Brown was shown a straight red card for a foul on Sam Mantom.

Despite the man disadvantage, Barnsley came out firing after the interval and took the lead when McGeehan fizzed a half-volley in at the near post to open the scoring.

Southend’s attacking play quickened as they went in search of an equaliser, but the Tykes would double their lead when Michael Klass lost the ball allowing Woodrow to fire in a second.

Blues had no answer to Daniel Stendel’s side who made it 3-0 in stoppage time as Barnsley broke forward, with McGeehan's shot initially saved before Jordan Green tapped in the rebound.

The victory increased Barnsley's unbeaten run to 15-games in the league as they go in search of an immediate return to the Championship, while Southend are without a win in their last seven ahead of next weekend’s trip to Blackpool.

There was to be no repeat of the miracle comeback seen by the Sky Sports cameras a fortnight ago against Portsmouth with Sky again in attendance as Barnsley came looking for a hat-trick of victories against Southend this season in all competitions.

Chris Powell made just the one change following last weekend’s draw against Accrington, with Stephen Humphrys missing out with numerous facial injuries, being replaced by Michael Kightly as Blues set up in a 4-3-3 formation.

Simon Cox, a hat-trick hero last time Blues were at home, had the game’s opening chance when he was played in down the right by Michael Kightly. With the angle narrowing though, Cox could only fire the ball straight at Adam Davies who comfortably held.

Barnsley themselves had an even better chance moments later when Jacob Brown’s low cross into the penalty area found the run of Mamadou Thiam, but the midfielder should have done better with his half-volley which went high and wide over the crossbar.

The visitors continued to have the better of the chances as the half wore on with Thiam curling the ball just wide from distance before Cauley Woodrow saw his shot from inside the area held by Nathan Bishop after being picked out by Dimitri Cavare.

Blues were having to live off scraps and were almost given a helping hand when Stephen McLaughlin fired the ball into the area and Liam Lindsey was close to turning the ball into his own net with an aimless swing of the leg.

The momentum of the match completely swung in Southend’s favour though when Barnsley were reduced to 10 men just before the break. A studs-up challenge from Jacob Brown on Sam Mantom in the centre circle saw referee Kevin Johnson showing little hesitation in showing a straight red.

And Blues had a good opportunity in first-half stoppage time to break the deadlock when Kightly cut onto his left foot and curled an effort on target. Ethan Pinnock stuck a leg out to block the ball as Southend tried bundling the ball in before it was cleared to keep the score goalless.

Despite the man disadvantage, Barnsley came out of the blocks quickly after the break and went close to opening the scoring in front of their travelling fans when Alex Mowatt’s corner was flicked on target by Lindsay before Timothee Dieng hacked the ball clear at the far post.

But the Tykes would get the breakthrough a minute later through Cameron McGeehan. There was a touch of fortune about the goal as the ball fell kindly after bouncing off the midfielder’s back, but there was no luck about the finish as he rifled the ball in at Bishop’s near-post on the half-volley.

Blues were struggling to make their numerical advantage count while Barnsley, with all the confidence a 14-game unbeaten run brings, kept pressing forward, going close once again when Mowatt’s curling effort just went wide of the woodwork.

With half an hour remaining, Chris Powell threw on Harry Bunn and Charlie Kelman. Instantly the home side’s intensity picked up and Kelman had a good chance to level, chesting down McLaughlin’s cross only for Davies to spring across and palm the ball clear before the youngster could strike.

Barnsley though would go an increase their advantage as they capitalised on a poor touch from Michael Klass. Mike Bahre stole the ball from the Blues midfielder, slipping in Woodrow who struck first time across the face of Bishop to double the away side’s lead.

And in stoppage time, the visitors would rub salt in the wound as they made it 3-0 on the counter-attack. McGeehan's initial effort was saved by the sprawing Bishop but substitute Jordan Green was on hand the tap the ball into the empty net.

The win helps Barnsley keep the pressure on Luton at the top of the table and extended their unbeaten league run to 15-games while Southend remained seven points clear of the relegation zone ahead of the 3 o’clock kick-offs and without a win in seven.

Tickets for Blues' trip to the ABAX Stadium to face Peterborough United on Saturday 23 March are now on sale.

We have been given an initial allocation of 861 tickets for the fixture, which includes eight pairs of wheelchair and carer tickets in the Main North Stand. Additional tickets are available should they be needed.

Tickets for the Peterborough fixture will go off sale at 3pm on Friday 22nd March, any tickets that have not been collected by this time will be sent to Peterborough to collect on the day of the game.

These will be available to collect from the ticket collection booth which is located opposite the Main Ticket Office.

Tickets will be available on the day of the match and can be purchased by cash or card but please be aware of a price increase.

The club are offering free coach travel to this game, more information on this can be found here.

Prices for the match are as follows:

Please note that disabled fans pay the age relevant price and are entitled to a carer ticket free of charge.

Headsets for match commentary are available for visually impaired fans at the Main Reception on the day of the game. 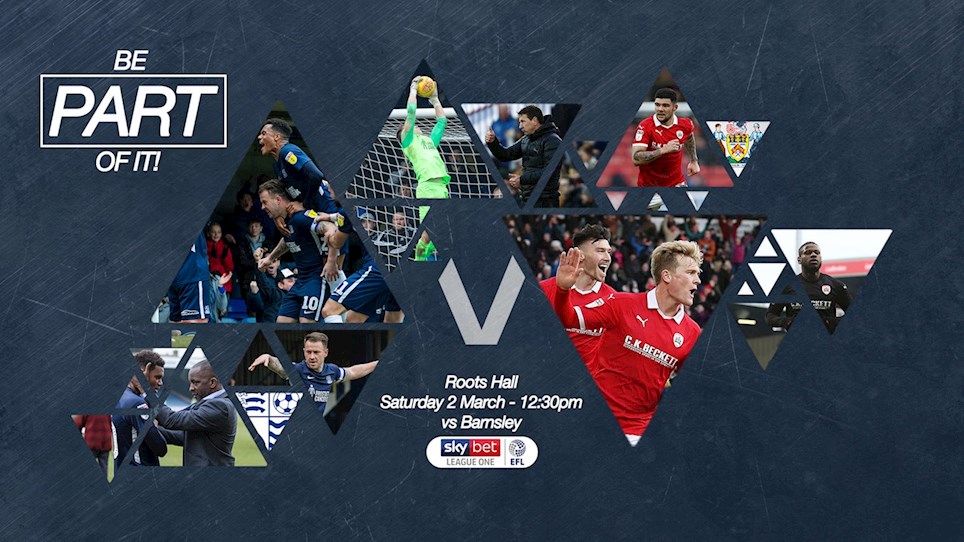 Secure your seats for the Barnsley game!


Next up for Blues in Sky Bet League One is a home clash against another promotion hopeful in Barnsley - and again it's going to be LIVE on Sky Sports.