A late Blues comeback wasn’t enough to prevent Southend from an opening day defeat as Chris Powell’s side lost 3-2 to Doncaster Rovers at Roots Hall.

Southend had been by far the better team in the first-half and only some goalkeeping heroics from Marko Marosi kept Chris Powell’s side out.

The Slovak saved efforts from Harry Lennon, Michael Kightly, Ben Coker and Simon Cox in a frustrating half for Blues who felt they deserved to go into the break with a lead.

Having survived the first period, Grant McCann’s side made Southend pay by scoring with their first attempt on target as John Marquis found the top corner.

Shortly after, Mallik Wilks struck a smartly taken goal before a daisy-cutter of an effort from Tommy Rowe somehow managed to find the bottom corner to put the game seemingly out of sight for Blues.

With the Blues looking down and out, Tom Hopper grabbed one back with 15 minutes to play after Sam Mantom’s effort was saved and the former Scunthorpe man bundled the ball over the line.

And Theo Robinson made it a tense final few minutes when a cross from the right found Hopper, who teed up the blonde-haired Robinson to smash the ball home.

The spirited fightback though was too little, too late for Southend who were unable to grab an unlikely equaliser as they began the season with a defeat.

Chris Powell will no doubt be pleased with his side’s resolve late on but ultimately it counted for nought as Doncaster took away all three points in a pulsating opening game.

Doncaster came to Roots Hall with an impressive record against Blues having not lost against Southend since 2007 and in an attempt to end that record, Chris Powell gave debuts to Harry Lennon, Luke Hyam and Tom Hopper.

One of those new boys, Lennon, came close to opening the scoring inside the first minute as he got on the end of a Michael Kightly cross only to head to ball straight at Marko Marosi.

That was a sign of things to come for Marosi in the first-half as he was by far the busier of the two goalkeepers in the opening period as Blues pressed.

Having already denied Lennon, Marosi sprung across his goal to save Kightly’s curling effort before making a superb save low to his right from a Ben Coker free-kick.

Marosi continued to be busy and he pulled off a smart reflex save to deny Simon Cox after the striker’s effort inside the area took a wicked deflection off of Andrew Butler.

And even when the Slovak’s defences were breached, Southend couldn’t break through as Kightly found out when he charged into the area, beating Marosi but seeing his effort cleared off the line by Butler as it remained goalless.

Having dominated the first-half, Southend were caught cold in the second period as Grant McCann’s side would sucker-punch Blues with two goals in quick succession to stun the Roots Hall crowd.

Rovers’ first goal came from their first shot on target as John Marquis got the better of Harry Lennon before rifling the ball into the top corner in front of the travelling fans.

Doncaster then doubled their advantage six minutes later when Mallik Wilks flicked the ball up on the edge of the area before finding the bottom corner with a low strike.

Powell reacted to the double-blow by bringing on Sam Barratt and striker Theo Robinson and the Robinson threatened almost immediately with a curling effort that just went wide.

But Rovers put the game beyond the reach of Southend as they grabbed a third through Tommy Rowe who’s daisy-cutter of an effort somehow managed to find it’s way into the bottom corner.

After his heroics in the first half, Marosi was eventually beaten but only after saving Mantom’s low strike. His parry fell to Hopper who just about managed to bundle the ball over the line to give Blues hope.

The goal from the former Scunthorpe man appeared to light a flame underneath the Blues and they pressed the Rovers backline hard in search of a second that might get them back into the game.

Hopper fired an effort over the crossbar after barging his way into the penalty area before Marosi was required to stop efforts from both Barratt and Mantom.

With four minutes of normal time remaining, Southend made it a nervy end as Hopper teed up Robinson who smashed the ball into the roof of the net from close range to put Blues within a goal.

The Roots Hall crowd were then lifted when the referee showed eight minutes of injury time and the Southend fans were almost out of their seats celebrating when Luke Hyam flashed a shot just wide.

But despite waves and waves of pressure from the home team late on, they were unable to break through and grab an unlikely equaliser as Rovers took the spoils.

Blues kick-off the 2018/19 Sky Bet League One campaign with a home clash against Doncaster Rovers...

Chris Powell is looking to start his first full season in charge with a bang and after the boss turned Southend's 17/18 relegation battle almost into a playoff push it's certainly going to be a season to look forward too!

This year's opening game will be the second time in successive years that Blues have hosted the first game of the season at Roots Hall and if it's anything like it was against Blackburn Rovers last year it's certainly one you don't want to miss.

Rovers finished 15th last season and will almost certainly be looking to improve on that mid-table finish.

Doncaster bought in ex Peterborough United manager Grant McCann in the summer after his successful 18/19 season with the club and his move to the Keepmoat Stadium is one to look out for this year. 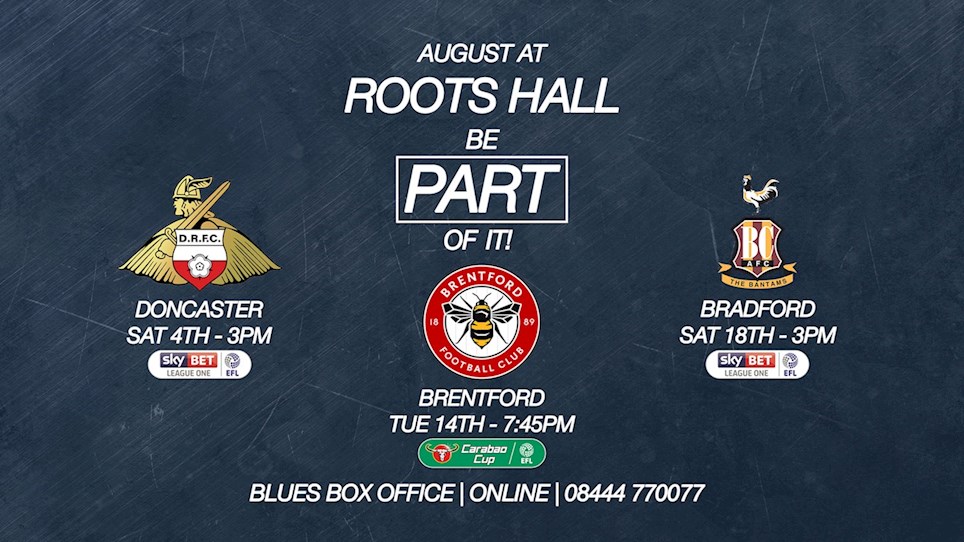 Be Part Of It At Roots Hall For Blues' August Fixtures


With the 2018/19 season less than two weeks away from kicking off Blues fans can now purchase their first home tickets for the new campaign.