Southend United vs Reading u21

Blues return to Checkatrade Trophy action as they welcome Reading u21s to Roots Hall for the second of their three group games in Southern Group B.

Southend began their Trophy campaign with a 2-1 defeat against Gillingham with Stephen McLaughlin’s goal unable to prevent Blues from propping up the table.

The young Reading side are a place above Blues in third after they drew their opener against Colchester United 2-2 before losing out on a bonus point with a 6-5 penalty shoot-out defeat.

Keeping up the momentum was the key message from Brown after three wins in a row in the league but the Blues boss is likely to make a number of changes with a trip to Doncaster on the horizon.

With tough league games coming up away at Doncaster Rovers and Wigan Athletic, Phil Brown will almost certainly rotate his squad for the visit of Scott Marshall’s Reading u21 side.

The competition rules allow for up to six changes from the side that played on Saturday and will give Brown the chance to feature youngsters such as Elvis Bwomono and Dru Yearwood.

Bwomono almost certainly will feature as Jason Demetriou is on international duty whilst the likes of Theo Robinson, Stephen Hendrie and Ted Smith will be looking for some vital game time. 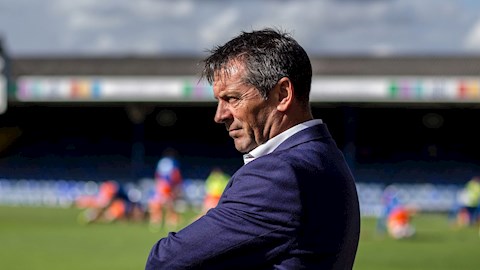 “Having got nine points from three games in a great week, we’ve got to carry that on.

“They’re a young team and they’re notoriously good at producing young players, bringing them through and playing football in the right way.

“They will try and out football us and won’t change their methods or mentality and we need to stand up to that.

“Whatever team I put out there, we need to be as good as them with the ball.”

Tickets are available on the night with prices for adults £5, concessions £4 and juniors £1.

Blues got off the mark in the Checkatrade Trophy thanks to Theo Robinson’s first-half strike which secured Southend a 1-0 win at home to Reading u21s.

Blues knew they would be knocked out of the competition if they lost to Scott Marshall’s Reading u21 side having lost their opening group game against Gillingham back in August.

Phil Brown made nine changes to his starting line-up following Saturday’s win against Blackpool with the starting 11 including no less than five players from the Blues youth team.

Dru Yearwood, Michael Klass, Jack Bridge, Harry Kyprianou and Elvis Bwomono all started and it was Bwomono who forced a smart save out of George Legg early on with a low drive from 20 yards out.

Marshall’s Reading had plenty of pace in their young side and Mark Oxley had to be on his toes, spreading himself well at the feet of Sam Smith to stop the striker racing through on goal.

Marc-Antoine Fortune and Theo Robinson started the game up front for Blues and it was the latter that broke the deadlock just after the half-hour mark with the simplest of finishes.

Good work from Jermaine McGlashan down the right allowed the winger to fire a low ball across the face of goal, finding Robinson at the far post to tap home the opener for Blues.

Before the break, the combination of McGlashan and Robinson almost paid dividends again after Robinson was found in the box by another McGlashan low cross but his shot was well blocked.

Reading came into the game off the back of a 2-2 draw against Colchester in their opening game and they came close to grabbing an equaliser on the hour mark through Jake Sheppard.

Cutting in from the right-hand side and under pressure from the Blues back-line, Sheppard managed to get a low shot away with Oxley having to be alert to get down to his right and make the save.

A second for Southend would have wrapped up the points for Blues and Robinson had a chance to get his second when he picked out a dropping ball on the edge of the area, but his shot lacked the power required to trouble Legg.

Reading brought on Tyler Frost and Josh Barrett in an attempt to at least force a bonus-point penalty shoot-out and Barrett had two great chances in the space of five minutes to bring the Royals level.

The Reading substitute first forced a fine save from Oxley, stinging the palms of the Blues stopper with a shot across goal after appeals for a penalty were waved away.

Moments later and Barrett was found unmarked at the far post after a scramble in the area. A low cross was fired towards Barrett but he failed to stab home from close range.

That was the closest that Reading would come to grabbing an equaliser and forcing a penalty shoot-out with Blues leapfrogging the Royals, and with Gillingham's late goal at Colchester seeing them top the group, Southend end the evening in second place.

Reading tickets will go on sale Wednesday 13th September at 9.30am...