Both Southend United and Colchester United will look to put their disappointing Emirates FA Cup exits behind them as they face off at Roots Hall in the final group game in the Checkatrade Trophy.

Blues have been knocked out of both the Carabao Cup and Emirates FA Cup by League Two opposition, and they won’t want to make it a hat-trick against their local rivals, Colchester.

Should Southend avoid defeat this evening they will advance to the next round, but should they win and Gillingham lose then they could leapfrog the Gills into top spot and secure a home 2nd round tie.

For Colchester to advance only a win will do for John McGreal’s side who so far have scored a bonus-point draw against Reading u21s before suffering a defeat at the hands of Gillingham.

Phil Brown expects to name a strong Blues line-up following Saturday’s defeat to Yeovil, meaning the likes of Anthony Wordsworth and John White could be in line to face their former club.

Michael Turner could also make his first appearance after he was an unused substitute during Saturday’s defeat at Yeovil. Turner had been out since pre-season following a hamstring injury.

Jason Demetriou will be missing though as he’s away on international duty with Cyprus, meaning youngster Elvis Bwomono may feature at right-back.

Club captain and former Blue Luke Prosser will miss the tie at Roots Hall as he continues to recover from a knee injury which has kept him out since November last year.

Kurtis Guthrie was another long-term absentee but he may feature after recent appearances against Yeovil and Gillingham, whilst Ryan Inniss could also face Blues for the first time having been on loan at Roots Hall last season.

“Because of Saturday’s result, it has affected team selection like any game would do. I always think about making changes unless it’s a run of ten games undefeated and then you have one out of the blue, but this one isn’t out of the blue.

“This one was against lesser, supposedly, opposition by definition being a second division team. Again, we’ve got that tomorrow night, so we have to make sure we’re on our mettle, that we’re organised and that we’re prepared to do the hard miles.

“If we do all that tomorrow night then hopefully the quality will come out."

Southend United progressed to the last-32 of the Checkatrade Trophy as goals from Josh Wright and Theo Robinson secured Blues a 2-0 home win against Essex rivals, Colchester United.

Blues began the game much the brighter of the two sides and Stephen McLaughlin will feel he was unfortunate not to open the scoring with two early efforts.

The Irishman first went close when he chested down the ball before shooting just wide on the half-volley, before going even closer minutes later with a free-kick that had Rene Gilmartin beaten.

McLaughlin’s fellow winger Jermaine McGlashan knows he should have done better when he was picked out by a cutback from Ryan Leonard only for the Blues number 17 to scoop the ball over.

The visitors knew that only a win would do if they were to advance but they showed little threat until Nicke Kabamba was slid through by Sanmi Odeluis, but his low ball cross was easily cut out.

Southend though looked much the bigger threat and should have taken the lead when Theo Robinson’s shot fell kindly to Nile Ranger, but the Blues striker couldn’t beat the sprawling Gilmartin.

Blues were getting closer with every attack and after Frankie Kent headed on a McLaughlin free-kick, Leonard couldn’t quite stretch far enough to divert the ball in at the far post, hitting the side netting.

The home side though did finally manage to break the deadlock before the half-time interval when Josh Wright opened his account for Southend with the simplest of finishes.

After McLaughlin’s stinging effort was palmed into the air by Gilmartin, the midfielder was left to easily nod the ball into the unguarded net to score his first goal for the club.

Southend were now in the driving seat to make the last 32 and could have all but cemented their place had Michael Timlin’s spectacular long-range effort not have been tipped over by Gilmartin.

With Timlin having gone close just before the break, Southend would put one foot in the next round shortly after the interval as Theo Robinson scored his second goal in the competition.

Robinson managed to beat one U’s defender to a bouncing ball before skipping past another, finishing off the move with a calm left-foot strike across Gilmartin and into the bottom corner.

Blues were now in cruise-control and they came close to making it three when Ranger appeared to have bundled the ball in after a scramble in the area only for Kent to get back and clear off the line.

Southend were cutting through Colchester at will it seemed and even John White managed to slide his way into the penalty area, hitting Gilmartin in the chest with his effort.

Blues had a chance to round off the night in style from the penalty spot late on following a foul by Kent on White, but substitute Simon Cox smashed the spot-kick against the foot of the post.

It wasn’t to matter though as Blues comfortably made it through but they’ll have make do with an away tie in the next round after Gillingham’s crazy 7-5 win against Reading saw them top the group.

Southend United face League Two's Colchester United who are 13th in League Two at Roots Hall on 7th November with a 7:45pm kick off!

Tuesday's game will be the last in the Checkatrade Trophy group stage, and the race for second place and progression to the next stage comes down to a Battle of Essex at Roots Hall.

Last time Blues faced the U's was back on 6th February 2016 when Phil Brown's side scored three goals in eight minutes to see off 10-men Colchester.

Blues are on three points, while Colchester are currently on two points and Phil Brown needs your support as the fortress continues to rock.

There's also hospitality available for Blues battle against the U's.

We have places available for our Checkatrade Trophy game against local rivals Colchester United in the Blues Legends Lounge.

Enjoy a one course meal, a seat in Blues Paddock area, half time tea, coffee & biscuits, official matchday programme, car parking space, team sheet, opportunity to meet players and NEW for the 17/18 season a post match visit from Blues Man of the Match.

Prices start from £30 +vat per person 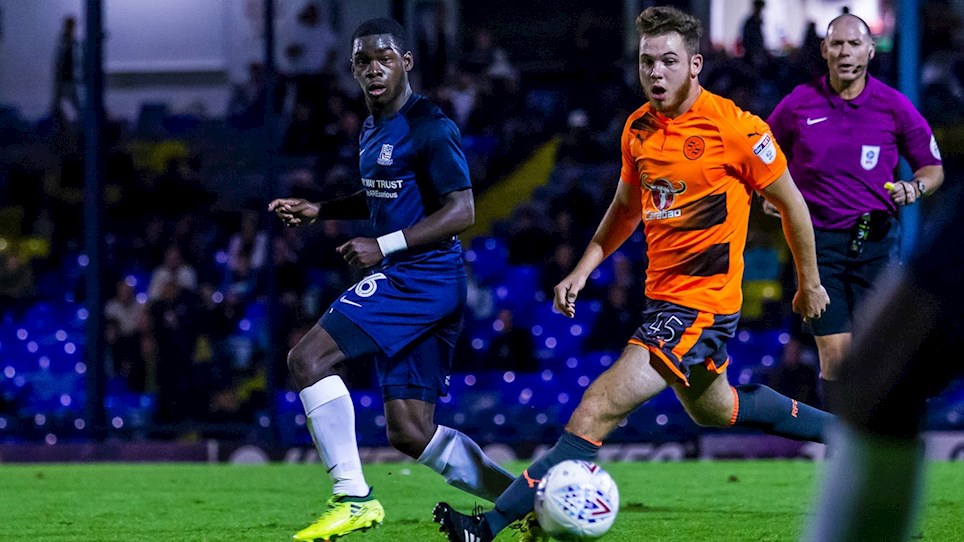 
Tickets for the final group game of the Checkatrade Trophy against local rivals Colchester United on Tuesday 7th November are now on sale.