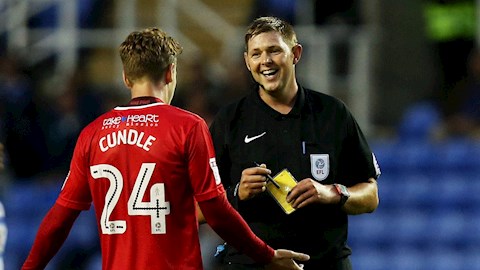 Brett Huxtable will referee his first Blues game this weekend

Blues have been held by Doncaster, Rochdale and Blackpool in their last three outings, stretching Chris Powell’s run without a win to four matches.

Rotherham on the other hand have won four of their last six and are well and truly entrenched in the race for promotion, currently sitting fourth in the League One table.

With third-place Wigan nine points above the Millers, Rotherham sole goal is to keep their promotion rivals below them at arms-length with nine games of the season remaining.

Blues will be without their top-scorer Jason Demetriou as the full back is away on international duty with Cyprus along with Harry Kyprianou who has been called up to the Cypriot u21 side.

Demetriou’s absence means John White or Elvis Bwomono will fill in at full-back, while Anton Ferdinand may return to centre-half having missed last weekend’s draw through illness.

Michael Kightly was an unused sub against the Tangerines last time out, so he’ll be looking to return to the starting line-up while Rob Kiernan and Ted Smith remain out.

Rotherham will be without goalkeeper Marek Rodak as he’s away with the Slovakian u21 side, meaning Lewis Price is likely to make his first appearance since November.

Paul Warne will assess on-loan striker Caolan Lavery as he’s struggled this week with illness, but Darren Potter and Jamie Proctor will both miss out with Achilles and knee injuries respectively. 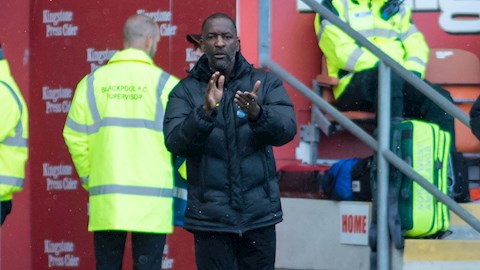 Preview: Rotherham can bring out the best in Blues says Powell

“It’s a good game for us because we like when we play against a side from the upper reaches of the league,” Powell said. “It tends to bring out the best in us.
“Rotherham will be trying to take care of their own situation but we will be looking forward to it.
“Everyone is fit and it’s a big game that everyone wants to be involved in."

“It was disappointing to have had back-to-back defeats, it is obviously not what we set out to do. We changed it again, and we played with much better shape.

“We had Matty Palmer in the middle, changed the wingers and I brought Josh and Bally back, and I think we played really well. We dominated the game and I thought that we were pretty comfortable.”

Blues ended their four-game winless run with an impressive 2-0 win at home to Rotherham United thanks to goals from Stephen McLaughlin and Simon Cox.

Southend were rewarded for a bright start against the Millers with McLaughlin opening the scoring inside the first seven minutes after being played in by Cox.

The home side arguably deserved to be more than a goal in front at the break and their performance got the second goal it deserved when Cox scored his first goal since Boxing Day late on.

A late rally by Rotherham bared no fruit as Southend grabbed their first maximum since mid-February against Portsmouth.

The win for Blues saw them climb into the top-half of the table for the first time under Chris Powell and the three points were just rewards for an impressive display.

Following last weekend’s 1-1 draw against Blackpool – Blues’ third draw in succession – Southend boss Chris Powell made two changes to his starting line-up for the visit of Rotherham United. Elvis Bwomono slotted in at right-back for the absent Jason Demetriou while Sam Mantom was awarded his full debut having come off the bench last weekend at Bloomfield Road.

Blues started the game brightly and opened the scoring inside the first seven minutes when Simon Cox outmuscled Will Vaulks to play in Stephen McLaughlin who was in acres of space, leaving the Irishman to calmly score past Lewis Price after just seven minutes.

It was the ideal start for Southend, who hadn’t won in their previous four matches, and they went close again a few minutes later when Price was forced to tip over a superb Dru Yearwood effort from 25-yards.

The home side then had a shout for a penalty when Marc-Antoine Fortune beat the offside trap to be clean through on goal, but referee Brett Huxtable felt Price had got to the ball as Fortune went down inside the area in what had been an action-packed opening 15 minutes.

Rotherham were struggling to deal with their hosts and twice thwarted Southend’s in quick succession when Simon Cox’s header from close range was deflected over before a header from Fortune had to be cleared off the line by David Ball as Blues pushed for a second goal.

The visitors had been restricted to only half-chances for most of the first-half, but they had a glorious opportunity to equalise right on the stroke of half-time when Millers striker Ball found the ball at his feet inside the area. His shot across the face of goal narrowly missed the far post with no one in a white shirt able to get a decisive touch leaving Blues to go into the break in front.

Both sides were evenly matched in the second period with the Millers going close when Richie Towell’s low strike was parried into the path of Jerry Yates who fell in his attempt to get to the rebound.

Rotherham continued to have plenty of the ball in the second half but were unable to convert that possession into chances and with just over 10 minutes remaining Southend made the points safe.

A long ball forward by Mark Oxley was latched onto by Cox in the penalty area, with the striker beating Ajayi before scoring past Price at his near post to notch his first goal since Boxing Day.

The visitors rallied in the final stages of the game and had a number of chances that could have made for a nervy finish at Roots Hall but they were unable to break down a resolute Blues defence.

McLaughlin first was made to clear the ball off the line following a goalmouth scramble before Towell hit the top of the crossbar with a looping cross. And in the final seconds of normal time Oxley made a superb save from a corner before Timlin cleared Ajayi's rebound off the line to preserve a third clean sheet in Southend’s last four matches.

The three points lifted the Blues into the top-half of the table while Rotherham remained fourth, six points above fifth-placed Scunthorpe United with a trip to Plymouth Argyle to come on Good Friday.

Blues take on Paul Warne's side on Saturday 24th March with a 3pm kick-off.

Southend are currently 13th in League One, 18 points behind Rotherham who are sitting comfortably in fourth place.

Rotherham head to Roots Hall on the back of one win in three games which has seen them drop valuable points as they try and get into the automatic promotion places.

Blues will be looking to put things right with a win on Saturday and your support is needed to push on Chris Powell's side!

Make sure you don't miss out and purchase your tickets in advance!

Visiting Roots Hall for the first time? Here's a handy guide that you may find useful.