Southend United travel to the ABAX Stadium tomorrow afternoon to take on Peterborough United, as they look to build upon last weekend’s dramatic 3-2 win over Scunthorpe.

Michael Turner’s injury-time winner in Chris Powell’s first game as Blues boss was Southend’s first win since Boxing Day and they’ll be in for a stern test against Grant McCann’s Posh.

Peterborough will want to quickly put to bed last weekend’s 5-1 loss to Leicester City in the Emirates FA Cup and they’ll want to ensure that there’s no hangover from that defeat.

Especially so as the hosts still have their sights set firmly on the play-off places with just four points separating them from 6th-placed Rotherham, with a game in hand.

Chris Powell delivered on his promise to bolster his squad before the trip to Peterborough with the signing of three players on transfer deadline day.

Midfielders Josh Wright and Anthony Wordsworth continue to recover from hamstring and calf problems respectively, with long-term absentees Rob Kiernan and Ted Smith are still out and Blues' new signing Sam Manton remains out while he receives treatment for an ankle injury.

The Posh also brought in reinforcements before the transfer window closed with Omar Bogle joining from Cardiff so he may feature, while Gwion Edwards remains out with an ankle injury.

Peterborough though will be able to call upon George Cooper and Joe Ward again after both were unavailable for last weekend’s cup tie against Leicester having been cup-tied.

“Everyone likes a last minute goal, a winner, an unlikely hero - but somewhere for us to start. It’s important that we got points on board early because we know the next game against Peterborough, and then obviously our next home game is against the league leaders [Wigan Athletic].

“They [Peterborough] have a very open style of playing, it suits the players that they have. Even though it was a tough result for them against Leicester, in what is a local derby, they will be focused on this.

"They are in a decent position, plenty of points and games. I think they will absolutely go for it.”

“They’ve got a good squad, a very experienced squad and he’s [Chris Powell] strengthened well. They’re a squad who are probably in a false position really; they shouldn’t be anywhere near where they are in the league but they showed what they can do when they play.

“Last week against Scunthorpe, I thought they were very good, looked organised. Conceded a couple of sloppy goals but after that, they had the belief and the willpower to go and win the game so we know it’s a tough game.

The Cypriot’s spot-kick came after just seven minutes when Stephen McLaughlin was brought down in the area by goalkeeper Jonathan Bond, who went the wrong way for the penalty.

Blues were made to work hard for the three points with Mark Oxley pulling off some impressive saves either side of the interval as Southend’s defence remained resolute.

A nasty injury to John White early in the second half – resulting in him leaving on a stretcher – meant Blues had to see off 10 minutes of added time to secure Chris Powell’s second successive win.

And they did just that to maintain Powell’s perfect start as Blues boss, pushing them further away from the drop-zone and securing Southend’s first back-to-back victories for almost four months.

The introduction of Powell as Blues boss had proved so far to be a success for Southend who went into the trip to Peterborough with only two away wins all season.

Following last weekend’s win against Scunthorpe United, Chris Powell named an unchanged line-up for the trip to Peterborough with new boys Shayon Harrison and Freddie Ladapo on the bench.

Confidence was up in the camp after that injury-time win last time out and Blues started off brightly at the ABAX Stadium, creating a half-chance early on through Stephen McLaughlin.

Southend’s bright start was rewarded when referee Whitestone gave Blues a penalty after McLaughlin was brought down in the area having beaten goalkeeper Jonathan Bond to a loose ball.

Jason Demetriou stepped up to take the spot-kick and sent Bond the wrong way to notch his sixth goal of the season and give Blues the lead after just seven minutes.

Having been soundly beaten by Leicester City last weekend, Peterborough were looking nervy at the back and Ben Coker almost exploited that fragility with a low cross that caused havoc.

The initial ball in somehow went right the way across the six-yard box without an orange shirt being there to get a decisive touch, before Demetriou’s strike deflected into the grateful hands of Bond.

The home side though would start to get a foothold in the game and they created a couple of half chances of their own with Jack Marriott and Marcus Maddison testing the hands of Mark Oxley.

Towards the end of the half Peterborough thought they’d levelled when full-back Andrew Hughes beat Oxley with a driving shot from the left, only for it to be ruled out for offside.

And Posh would end the half on the front-foot, carving out another good chance to level before the break when Marriott was slid in only to be stopped by a brave Oxley.

The home side’s momentum carried on into the second period as well and within three minutes of the restart, Oxley spread himself brilliantly to stop Marriott from levelling.

In trying to stop Marriot from getting in on goal, John White appeared to sustain a nasty looking injury which ended his match prematurely, with the defender leaving the field on a stretcher.

Anton Ferdinand was brought on for White and after play finally resumed, Peterborough had a succession of corners that caused problems for the Blues’ reshuffled back-line.

Southend though almost caught Posh on the break with Simon Cox breaking down the left before cutting inside and seeing his swerving strike just miss Bond’s left-hand post.

McLaughlin then went close for Blues seconds later when a low cross from the left found it’s way out to the Irishman on the far side, with his first-time strike whistling past the post.

That was a brief respite for Blues as they were being made to defend manfully to retain their lead as Ferdinand made a superb last-ditch tackle to prevent Omar Bogle scoring on his Posh debut.

Oxley was then called into action to stop Chris Forrester’s long-range effort before Grant McCann brought on reinforcements up front in the form of Danny Lloyd and Junior Morias.

Chris Powell responded by bringing on Freddie Ladapo for his Southend debut and he had a great chance to mark his first appearance with a goal, getting on the end of Coker cross only to head wide.

Southend were on the verge of back-to-back wins for the first time since October and tempers were beginning to flare with crunching tackles going in from both sides.

Following the lengthy stoppage for White’s injury, 10 minutes of added on time were shown at the end of the half making for a nervy finish for the Blues.

And with two minutes of the 10 remaining Hughes again thought he had snatched a point for Posh, smashing home from close range only to see the linesman’s flag up once more.

One final Peterborough corner in the last minute saw Bond come up from the back but Southend m kept the home side out one final time as the referee’s whistle blew for full time.

Tickets for Blues' game against Peterborough will come off sale today at 3pm...

All prices rise by £2 on match day. However U18, and U12 only rise by £1 and U7 tickets remains the same price.
Disabled pay the age relevant price with a free carer if required.
You can buy Online, in person or by calling 08444 770077.
For Peterborough travel details click here. 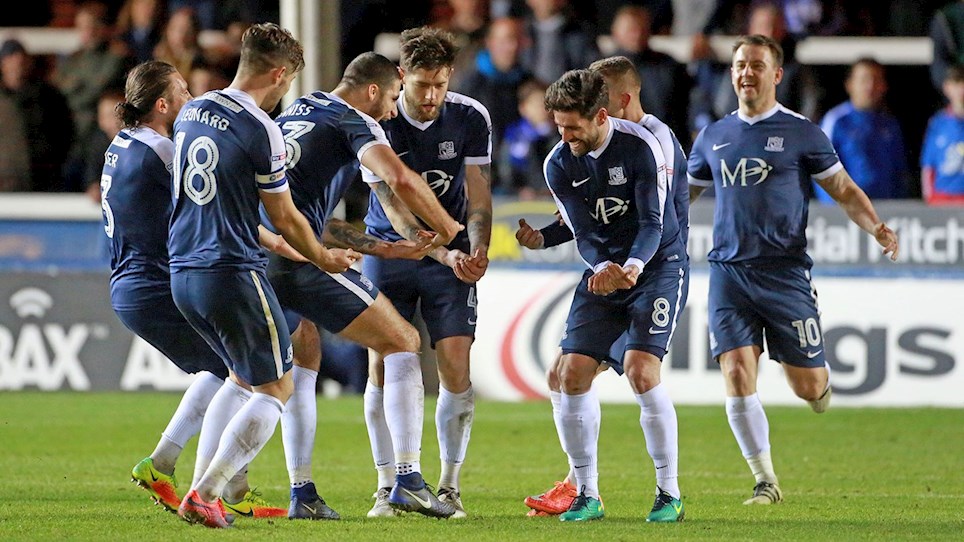 Blues Are Travelling This Weekend To Face Peterborough


Blues' first game of February sees them travel up to Peterborough as Chris Powell takes charge of his first away game since his appointment...