Chris Powell and Ryan Lowe face off in the battle of the unbeaten managers later this evening as Powell’s Southend United take on Lowe’s Bury at Gigg Lane.

Blues boss Powell goes into tonight off the back of three successive wins while Lowe is unbeaten in his opening four games since taking over the league’s basement club.

As a result, both sides go into this evening’s encounter full of confidence with Southend having brushed aside the league leaders Wigan while Bury notched a last-minute equaliser at Bradford.

Despite Blues ending Wigan’s 16-game unbeaten run, Powell will not be taking the Shakers lightly as the Southend boss eyes a place in the top half of the table and a fourth straight win.

Blues have no fresh injury concerns after Saturday’s win over Wigan. Although both Michael Turner and Marc-Antoine Fortune required stitches after the game, neither missed training yesterday.

Josh Wright is back in training following a hamstring strain but he’s is unlikely to feature while Sam Mantom, who’s yet to feature for Blues since joining on loan from Scunthorpe, will also miss out.

John White remains out due to an ankle problem and he’ll be on the sidelines along with Anthony Wordsworth, Rob Kiernan and Ted Smith.

Bury will assess the fitness of defender Nathan Cameron ahead of tonight’s clash with club concerned he may not be able to play twice in four days after a long-standing knee injury.

If Cameron is unavailable, then former Blues defender Adam Thompson may be drafted in to face his former club. Craig Jones, Jermaine Beckford and Eoghan O’Connell are all out through injury.

“We’ve got to understand that Bury have picked up recently. They’ve got a decent squad and have players that know this level.

“It’s a harder game [than Wigan] in my eyes for my players because the expectation now of everyone is it’s a game that we should win, but it’s not like that. Bury have done well of late and got a morale-boosting equaliser on Saturday at Bradford.

“We’re under no illusions here. We’ve got a long way to travel and we’re playing against a side that are really fighting for their lives.”

Blues drew 0-0 against Bury at Gigg Lane in a game which they had opportunities to win, as the leagues two in form sides faced each other.

Chris Powell made two changes to Blues starting line-up away at Bury, with Freddie Ladapo and Shay Harrison coming in for Simon Cox and Marc Antoine Fortune.

Blues started the game brightly in the opening phases, as in the 2nd minute of the game Michael Timlin saw a 20-yard curling effort go just wide of Connor Ripley’s right hand post.

Moments later, Freddie Ladapo cut in from the right on the 5th minute, and curled an effort just wide of Ripley’s far post.

In the 24th minute the first real opening of the game fell to Freddie Ladapo, as some intricate footwork from Shay Harrison saw the Spurs loanee put Ladapo in on goal, however, the Palace loanee fired his effort straight at Ripley in the Bury goal.

Bury managed to pluck up a rare attack in the 35th minute, as Zeli Ismail, who looked to be the Shakers main threat, managed to work some space on the edge of the area, which was deflected just wide of Oxley’s right hand post.

In the 40th minute, Blues went close again, as this time following an interception by Jason Demetriou in the centre of the park, Dru Yearwood and Stephen McLaughlin played a neat one two, which was then laid off to the Blues striker Harrison, whose powerful drive towards the bottom right hand corner was gathered at the second attempt by Ripley.

Following an impressive first half display, Blues made a substitution, with Jermaine McGlashan coming on for Michael Kightly who looked to have received a knock.

However, it was Bury who started the second half the strongest, as George Miller was put in one on one against Oxley, however, the Bury strikers touch took him wide of the goal, and he was forced to chip the ball into the penalty area, where James Hanson met it, but could only header the ball straight into Oxley’s hands.

The Shakers went close again in the 52nd minute, as they won a corner on the left-hand-side which was crossed in towards Peter Clarke, whose effort looked goal bound, but for Stephen McLaughlin’s clearance off the goal line.

On the hour mark Blues went close to snatching a goal on the counter attack following an excellent individual run by Dru Yearwood, however, the midfielder dragged his effort just wide of Ripley’s right hand post.

In what was an evenly contested second half, Blues went close to scoring with just 13 minutes to go, as Harrison had a powerful effort from the edge of the penalty area parried away by Ripley, before Yearwood sliced the rebound over the crossbar.

Blues nearly nicked a late winner, as some brilliant hold up play by substitute Marc Antoine Fortune slipped Ben Coker down the by-line, Blues left back then cut inside, and saw his right footed effort tipped just wide of the goal and cleared to safety.

This draw mean that Blues manager Chris Powell is yet to see his side beaten, and will be looking to grab all three points against Portsmouth at Roots Hall on Saturday.

On Saturday Powell became the first permanent Blues Manager to win his opening three matches after a superb result against top of the table Wigan Athletic.

Portsmouth make the trip to Southend on the back of a 2-1 defeat to third placed Blackburn, just three days after ending a six game winless run with a 2-1 away victory against MK Dons last weekend.

We want Roots Hall rocking for this fixture with over 8,600 tickets already sold!

Block X in the Paul Robinson West Stand is now open but we do not recommend families go into this block (Block P, Q and R and South Lower has seats remaining). There will be no movements allowed into Block X for tickets already purchased.

Purchase now to avoid missing out…

Click here to find out all the information you'll need ahead of the game. 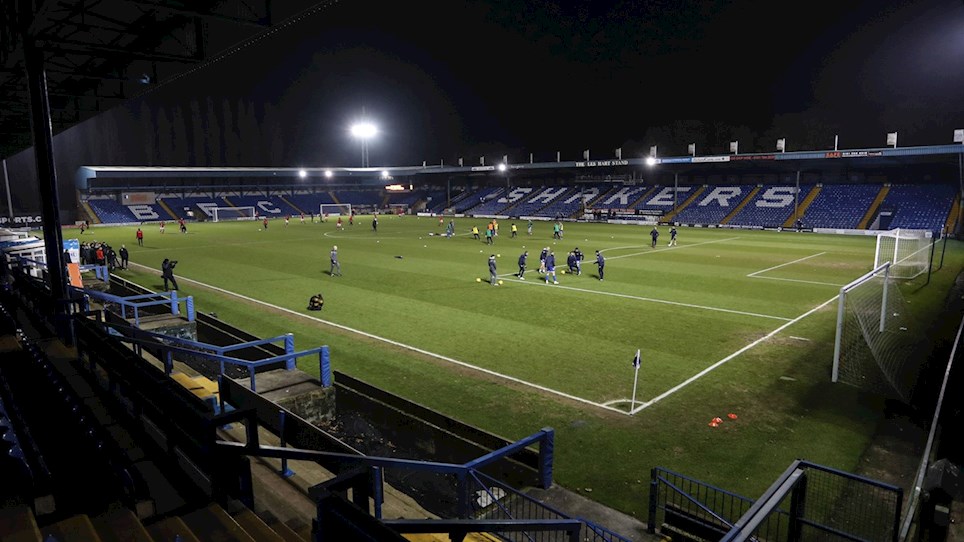 
Tickets for Blues' game against Bury on Tuesday 13th February will come off sale on Monday 12th February at 5pm...